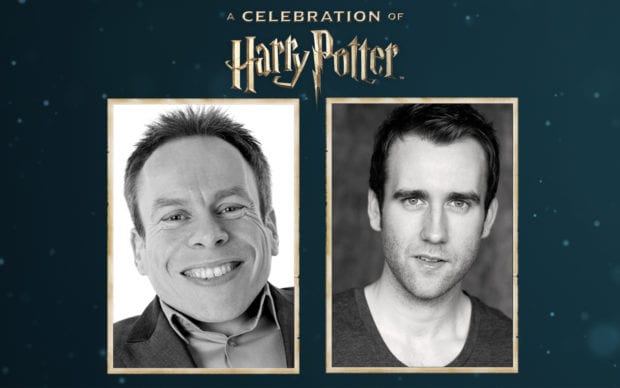 Universal Orlando and Warner Bros. Consumer Products have revealed the first guests and details about the fourth annual A Celebration of Harry Potter taking place Jan. 27 to 29, 2017.

For the first time ever, Warwick Davis (Professor Flitwick and Griphook) will attend the event and participate in festivities throughout the weekend, alongside fellow Harry Potter film star Matthew Lewis (Neville Longbottom). More talent will be announced on a later date.

This year’s A Celebration of Harry Potter will give guests the opportunity to celebrate J.K. Rowling’s Wizarding World with a variety of exclusive experiences and attend the largest Harry Potter Expo in event history, featuring more partners and immersive exhibits than ever before. Expo participants will include: Warner Bros. Studio Tour London, Harry Potter: The Exhibition, Pottermore and Audible, MinaLima, Harry Potter and the Cursed Child, Scholastic, Google Daydream and Warner Bros. Home Entertainment.

HARRY POTTER EXPO
(Universal Studios Florida)
The Harry Potter Expo will be open to guests throughout the weekend and include the following booths and exhibits that will give fans a deeper insight into J.K. Rowling’s Wizarding World.

Warner Bros. Studio Tour London – The Making of Harry Potter
Guests will be able to see authentic props and the incredible behind-the-scenes talent that went into creating the Harry Potter film series.

Harry Potter: The Exhibition – Sorting Hat Experience
Are you a Gryffindor or a Slytherin? A Hufflepuff or perhaps a Ravenclaw? Guests will be able to be sorted into their Hogwarts house at this experience. Inside the expo, guests will also be treated to insider knowledge about the exhibitions tour before trying their hand at an exciting game of Quaffle Toss. Visitors will also be able to join their friends for a fun Quidditch-inspired photo opp.

MinaLima
Guests will be able meet graphic designers Miraphora Mina and Eduardo Lima at the MinaLima expo booth as well as view various props and prints from the Harry Potter films and Fantastic Beasts and Where to Find Them.

Pottermore and Audible
All weekend, Pottermore and Audible will be inviting visitors to participate in Audible Recall – the ultimate audio challenge that decides who knows the wizarding world inside-out and who has a bad case of the wrackspurts. Pottermore will also bring you the latest news and announcements directly from J.K. Rowling’s Wizarding World.

Warner Bros. Interactive Entertainment
Guests will be able to experience the Wizarding World in Lego Dimensions and explore the worlds of Harry Potter, Fantastic Beasts and be the first to play as Hermione Granger.

Behind-the-Scenes: Harry Potter Film Talent Discussion
Enjoy a fascinating and interactive Q&A session featuring some of your favorite actors from the Harry Potter films including Warwick Davis, Mathew Lewis and more. Discover what it was like to work on the most successful film franchise in history.

Learn Wand Combat Skills with Paul Harris
This interactive panel will offer you the chance to pick up your wand and take part in a live dueling masterclass, hosted by Warner Bros. Studio Tour London and featuring the world’s only Wand Combat Chorographer, Paul Harris.
*Kids panel will also be offered for guests ages 12 and under

Stories from Harry Potter: The Exhibition
Harry Potter: The Exhibition has the unique privilege of bringing a selection of some of the best known authentic props used to create the entire film series to fans in cities close to home. Each and every real element on display within the exhibition has a story. Eddie Newquist, creator of the exhibition, will be joined by Pierre Bohanna, head prop-maker from the films, to tell stories of how these props and costumes were selected for the exhibition and about their histories.

MinaLima
Miraphora Mina and Eduardo Lima, from the graphic design studio MinaLima, will share insights into their role as graphic prop designers, and how their paths crossed at the WB film studios in London while working for 10 years on the Harry Potter movies, and more recently on Fantastic Beasts and Where to Find Them. They will show some of the iconic props they created from both franchises, such as The Marauder’s Map, the Daily Prophet, The New York Ghost, MACUSA Wand Permit, and more. Additionally, they will discuss their involvement in The Wizarding World of Harry Potter – Diagon Alley.

Access to A Celebration of Harry Potter is included with regular theme park admission or with an annual or seasonal pass. Certain activities are first-come, first-served. Exclusive event vacation packages are also available for purchase and include special benefits and reserved sections for the panels and demonstrations.

For more information about the event, tickets and available exclusive event vacation packages, visit UniversalOrlando.com/celebration. See our coverage of 2016’s event below, as well as a Q&A with some of the Harry Potter film cast:

Harry Potter is one of my favorite movies of all time, Can’t wait for the next one.