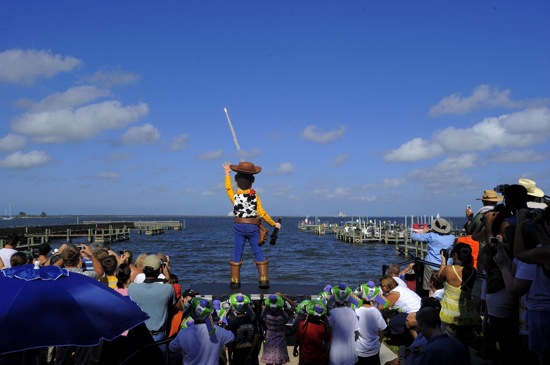 Woody, the sheriff from the “Toy Story” films, waved goodbye to Buzz Lightyear aboard the Space Shuttle Discovery as it launched yesterday from Kennedy Space Center.

Aboard Discovery is a 12-inch tall action figure of Woody’s pal from “Toy Story,” Buzz Lightyear. Woody joined thousands of launch-watchers to view the launch in Veterans’ Memorial Park in Titusville, Fla. Disney worked with NASA to include the Buzz Lightyear toy on mission STS-124 to celebrate the opening of the new “Toy Story Midway Mania” attraction at Disney’s Hollywood Studios.

The toy on the spacecraft will be transferred to the International Space Station where it will spend several months, before being sent back to Florida later this year on a future Space Shuttle mission. A series of educational programs for school children has been planned for the toy’s time in space.