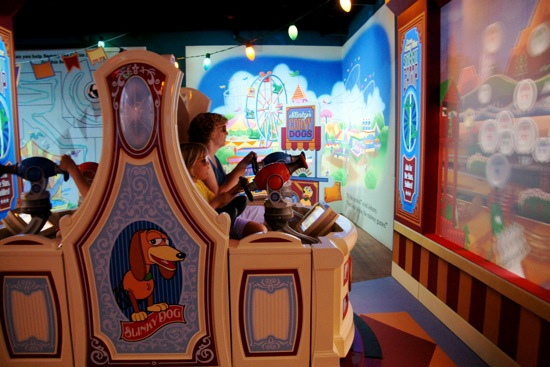 Editor’s Note: Deborah Brauser did an excellent job on her cover story (Toy Story Midway Mania) for the current issue of Orlando Attractions Magazine. Below are her first-hand thoughts of the ride that we didn’t have room for in the magazine.

From entering “Andy’s bedroom” all the way through playing the carnival games, the new Toy Story Midway Mania attraction really is the immersive experience Disney hoped for. The main queue looks amazing as I wander through bright and shiny toys from my childhood. The two young boys with me (ages 6 and 10) don’t recognize some of the toys, but can’t stop smiling the entire time they wait in line.

The most enjoyable part of the room, however, is Mr. Potato Head. His booming voice can be heard before you even see him and you quickly realize that he’s not just spouting random lines, but seems to be actually interacting with guests. As I’m looking around the many room details and half-listening to him finish up a song, he suddenly turns his big eyes my way and tells me to pay attention when I don’t move up in line. Later, he calls some children behind me, “Small Fries.” We are charmed – and even want to hang around a little longer with the big guy, especially after he takes off his own ear, tells a goofy groaner of a joke, and puts it back on. But it’s time to move on to the real star of the attraction – the ride.

In the loading area, I first ride with the 6-year-old and am delighted to see that the spring-action shooters are very easy for both of us. I had heard that the ride moves fast and even spins, and I’m a little nervous at first. Soon I realize, though, that it’s just a quick half-circle spin that turns the cars towards each screen wall of game play. No motion sickness with this ride at all.

As for the carnival games, I instantly see that they’re not mere video games that we go through, and we don’t just shoot at plain, flat targets. Instead, we virtually break moving plates, throw darts at balloon animals, and even toss rings at and over aliens. I also get hit with a small burst of air after throwing a ring over a high-scoring rocket ship, causing it to blast off. It’s all loud and very fast-paced.

With each game’s hosts (my personal favorite was Jessie the Cowgirl) cheering and shouting words of encouragement, hitting many, many targets feels very simple. That’s why I’m surprised at how low my score is – until I realize that the games are filled with easy to shoot small-scoring targets, as well as more difficult but higher scorers. I fall squarely in the “just trying to hit any old thing” category, which is an awful lot of fun but doesn’t score that big. This is probably the reason why the 6-year-old almost beat me the first time around and both boys beat my score embarrassingly bad the second time. Or maybe I’m just not that good at it. But that’s the beauty of the games; they’re incredibly entertaining for any skill level, and very addictive.

Both kids pronounce it the best ride of the day. And I’m ready to go again …