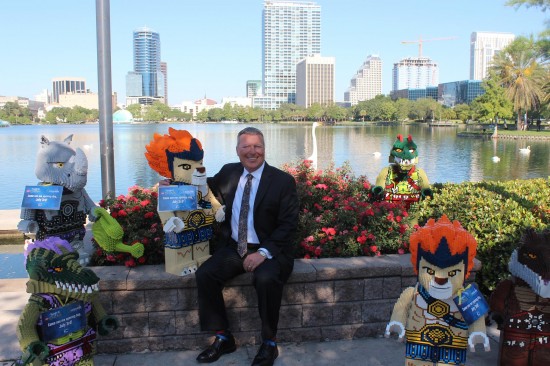 Animal tribes from Lego’s Legends of Chima descended upon Lake Eola Park in Downtown Orlando to help announce the opening date for Legoland Florida’s new expansion. The World of Chima will officially open on July 3, 2013. Orlando’s Mayor Buddy Dyer is pictured above with a few of the three-foot-tall Lego Chima figures.

Laval the Lion, Eris the Eagle and members of other Chima animal tribes are searching for the missing Chi, a powerful energy source needed to power Legoland Florida’s newest attraction that was stolen by Cragger, the leader of the Crocodile tribe. Starting May 27, fans can join The Quest for Chi needed to power The World of Chima by joining an interactive Facebook contest at www.facebook.com/LEGOLANDFlorida. One grand prize winner will be selected to be a VIP for the Opening Ceremony on July 3.

This expansion will be one of the centerpieces of the new Lego Chima brand, which already includes a major Lego product line, an animated television series to air on Cartoon Network beginning in July and multiple interactive video games and apps. Legoland Florida is the only place in the world that Lego fans can go to be fully immersed in The World of Chima.

Out of the Loop: What Legoland could...