Guests at New York’s American Museum of Natural History can get to know the king of the dinosaurs in a whole new way with T. rex: The Ultimate Predator, a brand new exhibit featuring the most scientifically accurate Tyranasaurus rex model ever created. 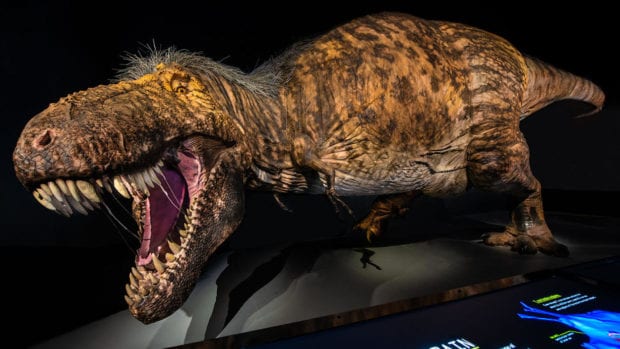 Face off with a fearsome feathered T. rex at New York’s Museum of Natural History.

Visitors to T. rex: The Ultimate Predator will encounter a massive life-sized model of a T. rex with patches of feathers—the definitive representation of this prehistoric predator. The exhibition’s massive life-size adult T. rex model is based on the most up-to-date findings and represents the most scientifically accurate representation of this pop culture icon to date. New research on this powerful hunter’s senses show that keen vision, smell, and hearing made it very hard for this predator’s prey to avoid detection.

The exhibition also includes reconstructions of several T. rex hatchlings and a four-year-old juvenile T. rex; a “roar mixer” where visitors can imagine what T. rex may have sounded like by blending sounds from other animals; a shadow theater featuring a floor projection of an adult T. rex skeleton coming to life; and a life-sized animation of T. rex in a Cretaceous environment that responds to visitors’ movements. At a tabletop “Investigation Station,” visitors can explore a variety of fossil casts ranging from coprolite (fossilized feces) to a gigantic femur, with virtual tools including a CT scanner, measuring tape, and a microscope to learn more about what such specimens can reveal to scientists about the biology and behavior of T. rex.

Exhibition visitors will come face to face with life-size models of a number of tyrannosaurs, including: Proceratosaurus bradleyi, the earliest known tyrannosaur that lived about 167 million years ago and was about the size of a wolf with a crest on its snout; Dilong paradoxus, which like many early tyrannosaurs, had arms that were relatively long and capable of seizing small prey, and was the first tyrannosaur found with fossilized feathers (discovered by exhibition curator Mark Norell and his colleagues in China); and Xiongguanlong baimoensis, a mid-sized tyrannosaur that, when it was discovered in 2009, offered a rare glimpse of a transitional species between the smaller early tyrannosaurs and the later giants.

Visitors will be tasked with placing various tyrannosaur family members in the correct time period on a magnetic wall and will be able to experiment with a praxinoscope that animates the difference between walking and running—T. rex could only truly run when it was young. A hands-on interactive lets visitors attach the right size tail to a T. rex torso to create a balanced posture. 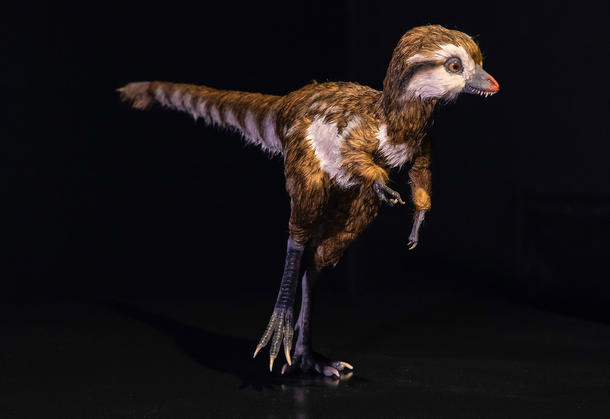 Exhibit attendees will see a life-size model of a four-year-old T. rex, which although not yet the “king” it would become in adulthood, would have weighed about five times more than a four-year-old boy and was as large as any other predatory dinosaur in its habitat. Fully covered in feathers for warmth and camouflage, this juvenile T. rex had relatively long arms (unlike its adult counterparts), a slim body, and bladelike teeth that could cut through flesh but were not yet capable of crushing bone.

They also will encounter a real fossil of a T. rex toe bone and a touchable cast of a T. rex thigh bone to gain a sense of scale for the fully grown giant, which stood about 12 to 13 feet high at the hip and was about 40 to 43 feet long. Fossil casts from a close relative to T. rex, Tarbosaurus bataar, will illustrate that T. rex wasn’t the only tyrannosaur that looked and behaved dramatically differently throughout its life. A cast of the youngest and most complete juvenile tyrannosaur fossil found to date, a two-year-old Tarbosaurus, has a delicate skull with thin bladelike teeth it likely used to catch small vertebrates and insects, while the cast of the huge adult Tarbosaurus skull indicates that when fully grown, it used its heavy, bone-crushing teeth and jaws to eat large animals.

A full-scale reproduction of the T. rex fossil skeleton on display in the Museum’s Hall of Saurischian Dinosaurs—in a different pose—is the subject of the exhibition’s “shadow theater,” in which the skeleton’s 40-foot shadow will “come to life” and demonstrate to visitors how the animal moved and interacted with prey and its own kind. Also in the exhibition, a “roar mixer” allows visitors to combine the calls of birds and crocodilians with the sounds of contemporary large animals such as elephants, whales, and bison to create a customized roar that accompanies an animated T. rex. And at the end of the exhibition, visitors will encounter a massive animated projection of a T. rex and its offspring in a Cretaceous-age setting. The huge dinosaur will react to visitors, leaving them to wonder, “Did that T. rex see me?” 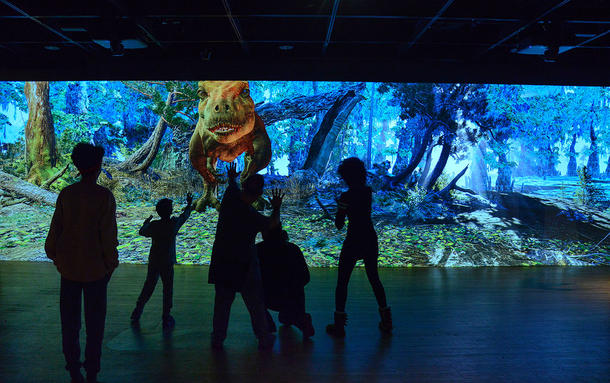 As part of T. rex: The Ultimate Predator, the Museum will present T. rex: Skeleton Crew, its first interactive, multi-player virtual reality experience, created in collaboration with HTC VIVE. The five-minute experience will be offered to visitors ages 12 and up within the exhibition. The facilitated experience will “transport” up to three players at a time to a space similar to the Museum’s Hall of Saurischian Dinosaurs, where they will team up to build a T. rex skeleton bone by bone. Once all of the bones are in place, the players will watch as the T. rex comes to life in marshland that is now Montana, its home 66 million years ago. The home version of T. rex: Skeleton Crew will launch on VIVEPORT, HTC VIVE’s global platform and app store, for VIVE owners in summer 2019.

“Virtual reality is a magical realm in which our perceptions of time and space are suspended,” said Vivian Trakinski, the Museum’s director of science visualization. “In virtual reality, nothing is too small, too big, too fast, too slow, too distant, or too long ago to be appreciated. We hope this technology will let our visitors experience the most fantastic and inaccessible realms of nature.”

“Through VR, visitors can engage with the subject of the exhibition in an exciting, in-depth way that enriches their knowledge and leaves a lasting memory for years to come,” said Victoria Chang, director of HTC VIVE Arts. “VIVE is proud to be a partner with the American Museum of Natural History, one of the world’s most innovative and forward-thinking museums. This remarkably engaging VR project harnesses the power of premium VR, bringing visitors closer to the anatomy, scale, and majesty of T. rex like never before.”

Founded in 1869, New York’s American Museum of Natural History has a special relationship to T. rex in particular, having discovered and mounted the first T. rex on display anywhere. The first T. rex skeleton was discovered in 1902 by the Museum’s legendary paleontologist and fossil hunter, Barnum Brown, and the Museum boasts one of the few original specimens of T. rex on public display in the Hall of Saurischian Dinosaurs.

“Dinosaurs, and Tyrannosaurus rex in particular, are such an important and iconic part of the Museum and have been throughout our history,” said Ellen V. Futter, President of the American Museum of Natural History. “So it seems fitting to launch the Museum’s 150th Anniversary celebrations with a major new exhibition on the ever-intriguing King of Dinosaurs. This exciting and fascinating exhibition will do what the Museum has done throughout its history and continues to do today: share the latest scientific breakthroughs with the public, introduce visitors to the researchers on the cutting-edge of discovery, shed new light on the great story of life on Earth, and inspire wonder and curiosity in visitors of all ages.”

“Dinosaur fossils, like other echoes of ancient life, are discoveries of the science of paleontology. But dinosaurs have a special status that transcends their importance to science—they fascinate and inspire the masses like few other animals—living or extinct—can,” said Michael Novacek, the Museum’s senior vice president and provost for science. “Chief among them is T. rex, perhaps the most famous and celebrated dinosaur that ever lived.”

T. rex: The Ultimate Predator is curated by Mark Norell, who joined the Museum in 1989. Norell, who is the Macaulay Curator in the Museum’s Division of Paleontology and its chair, has led and participated in a number of scientific investigations into the biology and evolutionary history of tyrannosaurs and other theropods—the group of dinosaurs most closely related to modern birds. His work includes the first discovery of a feathered tyrannosaur, Dilong paradoxus, in China in 2004. In addition to Dilong, many of the species studied by Norell and his colleagues and former students, and recent research findings, are featured in the new exhibition.

“In the last 30 years, we’ve seen a huge increase in both the number of tyrannosaur fossil discoveries as well as the availability of technology that lets us explore complex questions about these charismatic animals,” Norell said. “I never would have imagined that one day we’d be able to look at the shape of T. rex’s brain, analyze the tiny daily growth lines on their massive teeth to determine how quickly they put on weight, or use advanced biomechanical modeling to figure out the force of its bite.”

For more information about the American Museum of Natural History visit amnh.org, and watch these videos for additional dino-themed attractions: