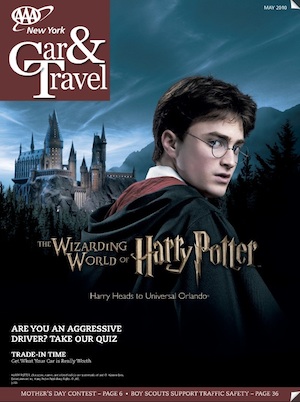 An article by Lisa Oppenheimer in the May edition of AAA Car & Travel reveals some new information about the new Harry Potter and the Forbidden Journey ride at The Wizarding World of Harry Potter in Islands of Adventure. The story gives the length of the ride (four minutes) and tells other details such the appearence (visual or audio?) of Moaning Myrtle.

From Harry Potter Heads to Universal Orlando:
“One of the most detailed lines winds through Hogwarts Castle, past the Portrait Corridor and through Dumbledore’s office to Harry Potter and the Forbidden Journey, a cutting-edge contraption that has caused speculators no end of agony trying to guess its contents. It would be a shame to give it away, but here is the CliffsNotes’ version: a four-minute ride flies (sort of Islands of Adventure’s Spiderman meets Disney’s Soarin’) and interacts with characters, as well as—the ride host does warn you it might become too intense—heights, speed and, heaven forbid, spiders.”

Although AAA is a reputable source, keep in mind these details haven’t been officially released by Universal.

I have to agree with you Matt…..AAA is a reputable source and I hope that it’s true….

I really can’t wait for this to open….it is going to be a blast and it’s something that Islands needs….Some rejuvenation!

What do you think about the ride time of four minutes?

‘The Unofficial Guide to Universal Orlando 2021’...

Out of the Loop: Cedar Point's Demon...