Your last view of Space Shuttle Atlantis until next summer, plus other changes at Kennedy Space Center Visitor Complex 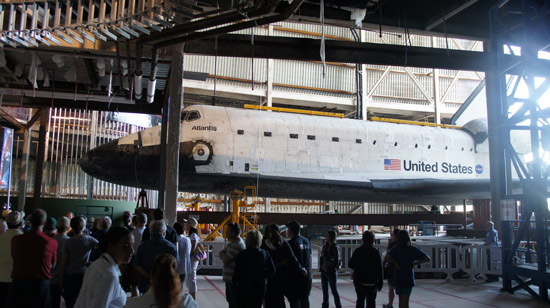 Last week, the space shuttle orbiter Atlantis was officially turned over to the Kennedy Space Center Visitor Complex, with a fireworks finale. Atlantis was then able to be viewed inside the new gallery building for one week only. The building will now be sealed, and the adjacent displays completed. Atlantis won’t be able to be viewed again until next summer 2013. Here are photos and a video from this limited time viewing opportunity. 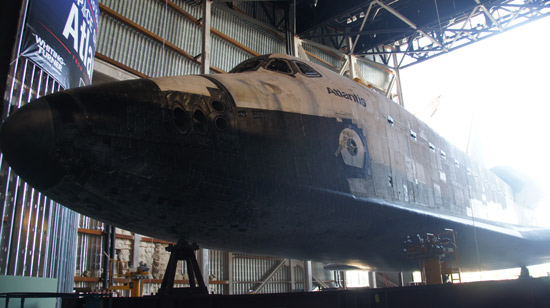 The plan is for Atlantis to be raised over 30 feet in the air, on an angle, with its payload doors open. Guests on the upper level will be able to look inside the payload bay, a unique view. 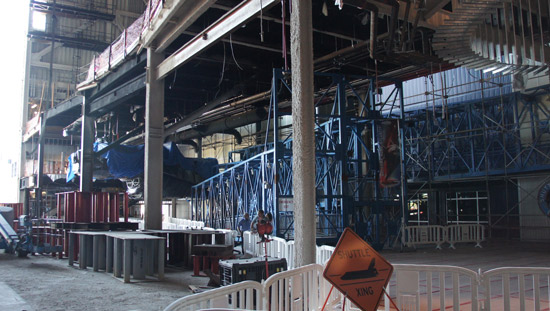 One of the gallery displays is of the “beanie” that sat on top of the external tank prior to launch. The beanie delivered liquid propellants to the tank, and vented gases. The beanie is already installed in the building. 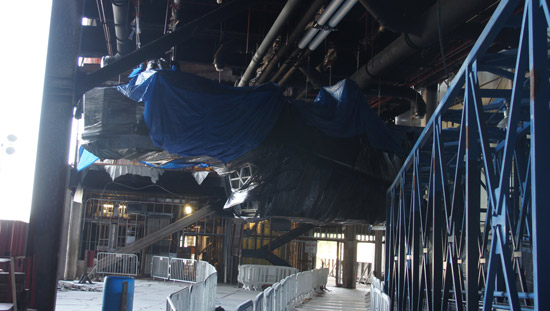 The beanie is here, currently wrapped in protective plastic. 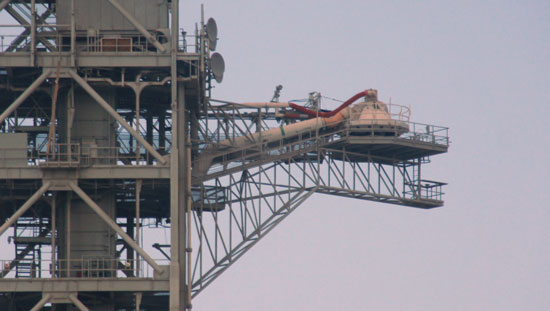 Here’s the beanie that is still at pad 39A. There used to be two shuttle launch pads. The beanie in the gallery is from the dismantled pad 39B, which was dismantled to make it available for the commercial space programs. 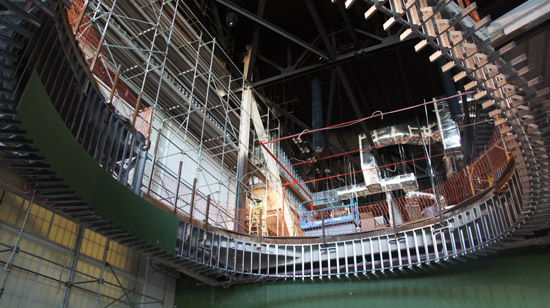 Staff at the Atlantis display said that a model of the Hubble Telescope will be placed in this area. 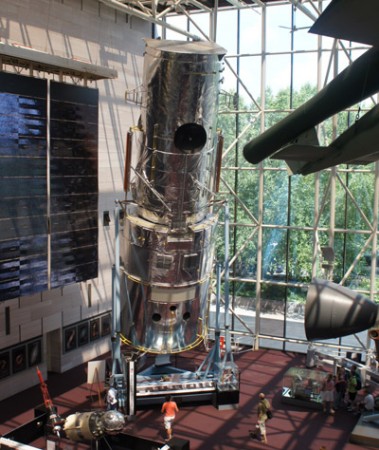 Seen here is a copy of Hubble, at the Smithsonian Air and Space Museum.

Atlantis was displayed on this platform. 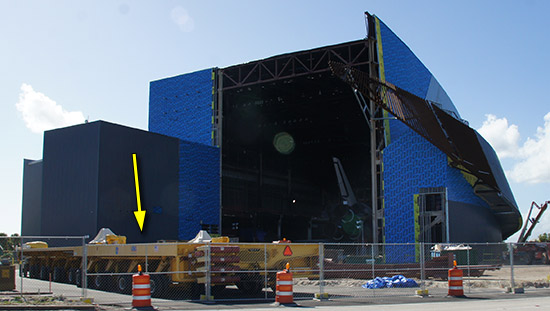 Just outside the building is the yellow transporter that carried Atlantis from the VAB to the Visitor Complex. 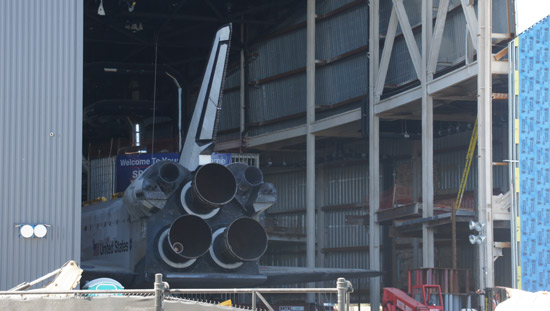 The fourth side of the building will be added here, sealing Atlantis inside.

Construction walls are at the front entrance of the new building. 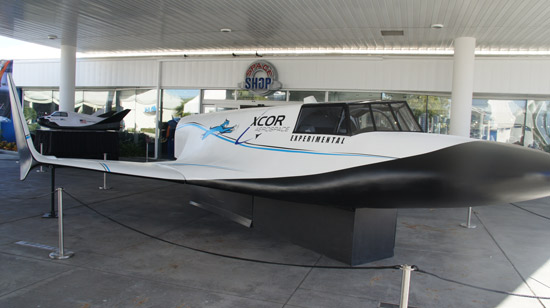 A new display at the Visitor Center is a model of one of the commercial space programs in development. This spacecraft would be the nose cone of a rocket, carrying astronauts to the International Space Station. The craft would return to earth much like the Shuttle orbiters, gliding to a runway. 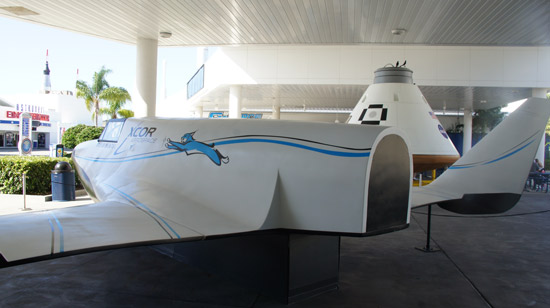 The rear of the XCOR spacecraft attaches to the rocket that launches it into space. 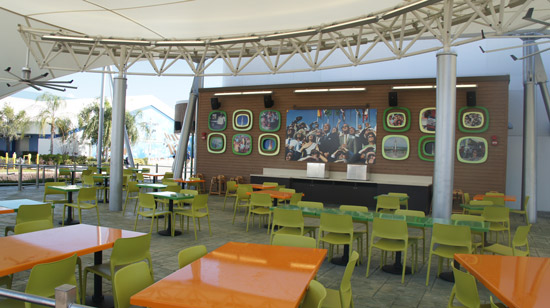 A new cafe has also opened at the Visitor Complex. 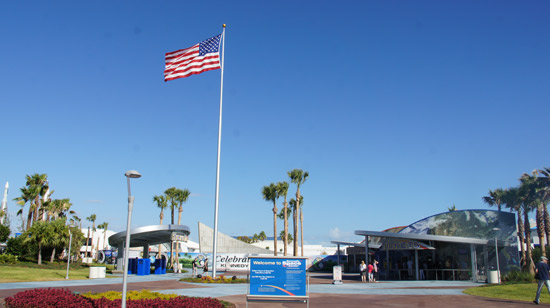 One of the largest recent changes at the Visitor Complex is the new entrance. Ticketing as at the left. Credit-card ticket kiosks are at the left. 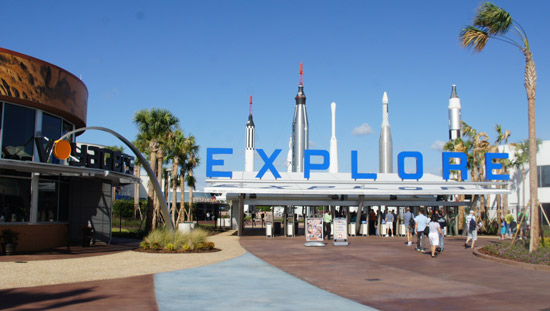 The new bag check and turnstile area. A gift shop is at the left. 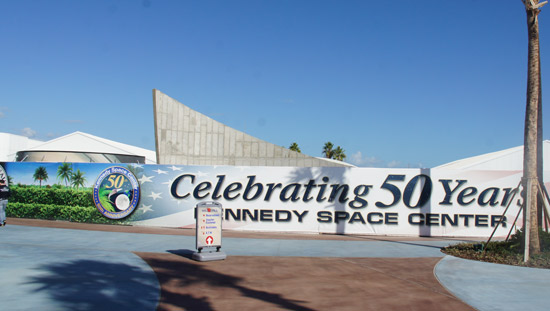 The site of the previous ticket area where spacemen looked down from overhead solar panels. The site is being redeveloped.

Here’s a look at Atlantis’ final journey and the fireworks show for her: