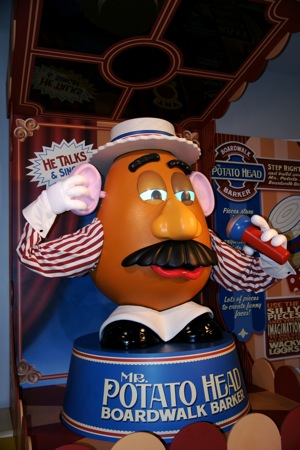 Disney released this Audio-Animatronics Timeline this morning. I thought it was interesting enough to repost. From Tiki birds to Mr. Potato Head …

Early 1950s
Walt Disney purchases a mechanical bird while vacationing in Europe. The souvenir becomes the inspiration for Audio-Animatronics technology.

1951
Work begins on “Project Little Man.”  Roger Broggie and Wathel Rogers, pioneers in Audio-Animatronicstechnology, create a miniature figure that is programmed with cams, cables and tubes to mimic tap-dancing routines performed by the late Buddy Ebsen.

1964
The world’s first fully animated human figure, Abraham Lincoln, debuts at the New York World’s Fair in Great Moments with Mr. Lincoln.  The figure causes a sensation, not just with the audience, but with Disney Imagineers, who were able to complete the figure in half the time they anticipated.
Audio-Animatronics figures are also in three other World’s Fair shows designed and produced by Disney: Carousel of Progress (featuring figures animated using a programming harness, a precursor of today’s motion capture systems), Magic Skyway and it’s a small world.

1965
Great Moments with Mr. Lincoln – featuring the Audio-Animatronics figure of Abraham Lincoln (actually, a duplicate since the original was still performing at the World’s Fair) – opens at Disneyland.

1970
Audio-Animatronics technology enters the computer age with the use of DACS (Digital Animation Control System), a computer-controlled playback system for Disney shows and attractions. Imagineers also begin using the Anicon-Animation Console – for animating and programming figures.

1989
The first A-100 Audio-Animatronics figure, the Wicked Witch of the West, debuts as part of The Great Movie Ride at Disney’s Hollywood Studios (then known as Disney-MGM Studios) in Walt Disney World Resort.  A-100 figures incorporate compliance technology that gives the characters more fluid and realistic movements.

1998
Hopper, the grasshopper from the Disney•Pixar film “A Bug’s Life,” is the most sophisticated Audio-Animatronics figure produced to date.  Featuring 74 functions, the character appears in “It’s Tough to be a Bug!”

2002
The first portable, all-electric Audio-Animatronics figure, Meeko, the raccoon from the Disney animated film “Pocahontas,” appears.  He’s in a basket carried by Pocahontas.

2006
The yeti, a major element of Expedition Everest at Disney’s Animal Kingdom, is the largest and most powerful Audio-Animatronics figure ever created by Walt Disney Imagineering. Standing more than 18 feet tall, the thrust of the yeti’s arm has the equivalent amount of force as a 747 jumbo jet.

2007
The Muppet Mobile Lab, featuring Muppets Dr. Bunsen Honeydew and his assistant Beaker, marks the first time that free-roaming Audio-Animatronics characters can interact and converse with each other, as well as with guests they encounter along their way.

2008
Mr. Potato Head in Toy Story Mania! at both Disney’s California Adventure and Disney’s Hollywood Studios marks the first time that an Audio-Animatronics figure features lips with such a wide range of lifelike movements, can remove and re-attach a body part (his ear) and has digitally animated eyes that can look directly at the particular guest with whom he is conversing. Also, since Mr. Potato Head has more lines of dialogue than any Audio-Animatronics figure ever created by Walt Disney Imagineering, it has required more programming hours than any other figure.

Video of Magic Kingdom's Concert in the Sky fireworks

HELLO I WOULD LIKE TO SEE AUDIO-ANIMATRONICS FOR THEME PARKS LIKE DISNEY, UNIVERSAL AND MANY MORE AND ALSO TO HALLOWEEN HORROR NIGHTS AND FOR FIVE NIGHTS AT FREDDY’S FRANCHISE IN REAL LIFE AND AMONG More OKAY