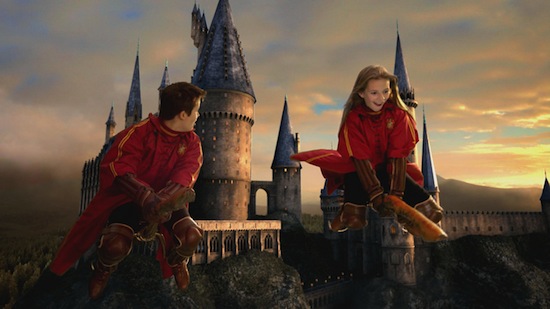 Aol’s WalletPop.com is hosting the exclusive online premiere of the complete Super Bowl commercial for Universal’s new The Wizarding World of Harry Potter area in Islands of Adventure.

The spot is also appearing on the home page of Aol, in advance of its CBS television broadcast on Sunday’s Super Bowl.

The ad shows two children riding on broomsticks through Hogsmeade. From that, many are guessing that broomsticks will be some part of one of the rides. You can briefly see the Dragon Challenge ride, and the riders aren’t on broomsticks. Plus at the end of the commerical, Harry Potter appears and tells the kids to follow him and they fly right into Hogwarts Castle. Since that’s where the brand new Harry Potter and the Forbidden Journey ride is located, you could guess you’ll be riding on a broomstick during that ride.

I’m excited to see the Harry Potter expansion but this commercial is really lacking. It doesn’t give me any of the wonderment I’m looking for and I’m a huge Potter fan.