The official Web site for The Wizarding World of Harry Potter at Universal’s Islands of Adventure was updated today with some new features and details on the rides and experiences.

One new feature on the Web site is a low fly-through tour of the Hogsmeade Village and around the castle. New details found on various part of the Web site reveal …

Harry Potter and the Forbidden Journey
This brand new ride in Hogwarts Castle will allow guests to “soar above the castle grounds, joining Harry Potter and his friends on a thrilling adventure. Riders will come face to face with creatures from memorable moments in the films such as the Hungarian Horntail, a giant Acromantula, Dementors, and the gigantic Whomping Willow as they speed and swerve through iconic locations from Harry Potter’s world.”
The ride is rumored to be using robot arm technology with guests riding on broomsticks.

As you make your way to the ride you’ll pass by Dumbledore’s office, the Defense against the Dark Arts class, the Gryffindor common room, the Room of Requirement and more.

This roller coaster ride is currently running as Dueling Dragons. But once made-over, “guests will pass the Goblet of Fire and Triwizard Cup on their way to choose their dragon.” You’ll choose between the Chinese Fireball and the Hungarian Horntail.

Flight of the Hippogriff 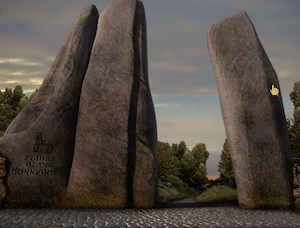 This family coaster used to be known as The Flying Unicorn. But when Wizarding World opens, “visitors will follow a path past Hagrid’s hut and will be instructed in the proper way to approach a Hippogriff. (A Hippogriff has the head of an eagle and the body of a horse.) Once on board, guests will then have a chance to bow to Buckbeak before the family-friendly coaster spirals and dives around the pumpkin patch, swooping past Hagrid’s hut. The coaster is described as “woven from wicker and decorated with fluttering leaves representing feathers.

Filch’s Emporium of Confiscated Goods
This shop will be located at the exit of the Forbidden Journey ride and it’s where you’ll be able to buy your on-ride photo. In addition to Harry Potter souvenir clothing and stationary, you’ll also be able to buy authentic movie prop replicas here, including walking sticks and Death Eater masks.

Dervish and Banges
This shop will offer The Monster Book of Monsters, Hogwarts clothing and Quidditch gear such as Quaffles and Golden Snitches. Brooms will also be for sale, including the Nimbus Two Thousand and the Firebolt. This shop is also listed as carrying Sneakoscopes, Spectrespecs and Omnioculars.

Ollivanders – Makers of Fine Wands Since 382 B.C.
We previously wrote about Ollivanders here, but the updated Web site says that in addition to having a wand choose you, you’ll find character replica wands from the films and collectible wand sets.

Owl Post
This is where you’ll be able send mail with a Hogsmeade postmark using Wizarding World stamps. In the rafters of the building you’ll see nearly two dozen resting owls, turning their heads, hooting and ruffling their feathers. The site warns you to cover your ears as you pass the Howler displayed in the window. Listen for the Grand Owlery clock tower to hoot on the hour.

Three Broomsticks
This restaurant will offer Butterbeer and pumpkin juice, and meals such as fish and chips, shepherd’s pie, Cornish pasty and turkey legs. Kids meals and dessert are also available.

Information was released this morning on a new contest through the Today show. A school classroom will win a trip to the opening ceremonies by making a video telling “Why is my class extraordinary?”

The contest ends on March 19. The public will be allowed to vote online for the winning class through April 29. That tells us The Wizarding World of Harry Potter won’t have its opening ceremony until after that date. There’s also a section of the contest rules that says all travel arrangements must be made a minimum of 25 days prior to travel. That would put the opening sometime in late May. Of course the new land could soft-open before the official ceremonies, and the contest says all dates are subject to change.

• You can read more about The Wizarding World of Harry Potter in the Winter 2010 issue of “Orlando Attractions Magazine.”

Drinking at Walt Disney World – The...

Pleasure Island not the only Disney entertainment...