Barack Obama was once ‘booted’ from Disneyland for smoking in college

The Disneyland Resort is considered the “Happiest Place on Earth” to many, but for one former President, not so much. 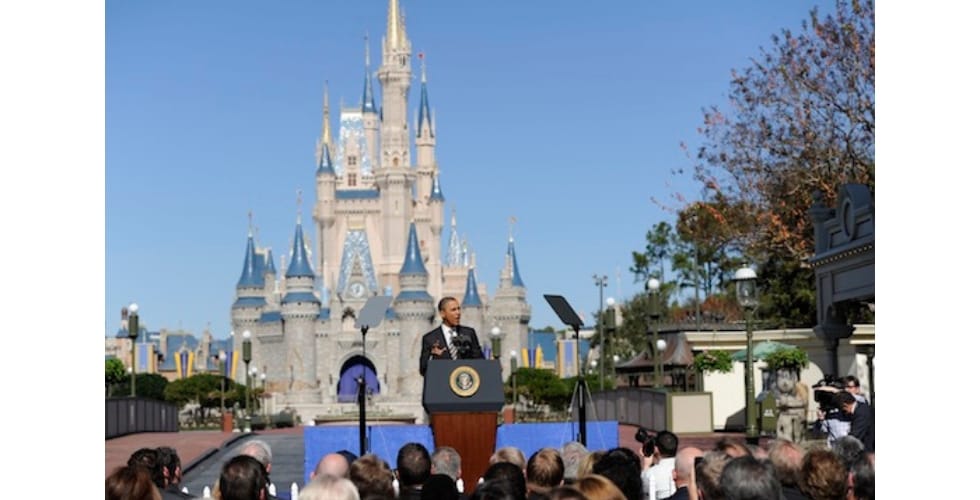 President Obama is no stranger to the Disney Parks, pictured here speaking during a visit to Walt Disney World in 2012.

Barack Obama was campaigning in Anaheim, Calif. this past Saturday to support seven Democratic congressional candidates. During the rally, Obama shared a story about a past experience with the local Disney Park, where he was kicked out for smoking in college.

Obama traveled on that first trip with his grandmother, mother, and younger sister, but added that “Disneyland was the highlight. I went and did all the ‘Bare Necessity’ [The Country Bear Jamboree?] thing, Small World, the Matterhorn – it was the bomb.”

Obama’s second trip came when he was attending Occidental College, a liberal arts school in Los Angeles. Only this time, Obama wasn’t visiting for the Matterhorn – he was there to see a Kool & the Gang concert.

“After the concert, because we were teenagers – you could still kind of hang out in the park – so we went into the gondolas, and I’m ashamed to say this, so close your ears, young people. But a few of us were smoking on the gondolas.”

With a few whistles and cheers from the crowd, Obama reassured everyone that “these were cigarettes, people. Terrible things.”

Obama continued, “As we’re coming in, there are these two very large Disneyland police officers. They say, ‘Sir, can you come with us?’ And they escorted us out of Disneyland. This is a true story, everybody! I was booted from the Magic Kingdom.”

The former President closed his story with a moment that made the experience truly memorable for him.

“At the end, they said, ‘You’re gonna have to leave sir, for breaking the rules of the Magic Kingdom, but you are welcome to come back anytime.’ Which I thought, well, that was nice of them,” said Obama.

After the speech went viral online, Michael Eisner, former CEO of The Walt Disney Company, had this to say on Twitter:

Just to be clear. I was not CEO Of @Disney when @BarackObama was at @Occidental Collage, and was “booted” out of @Disneyland for smoking a cigarette. Knowing he was going to be President, I wouldn’t do that 🙂

You can check out Obama’s Disneyland anecdote for yourself below:

Obama jokes about smoking at Disneyland in Anaheim speech