Tokyo Disney Resort has shared the first look at their upcoming Beauty and the Beast-themed dark ride, coming to the park in 2020. 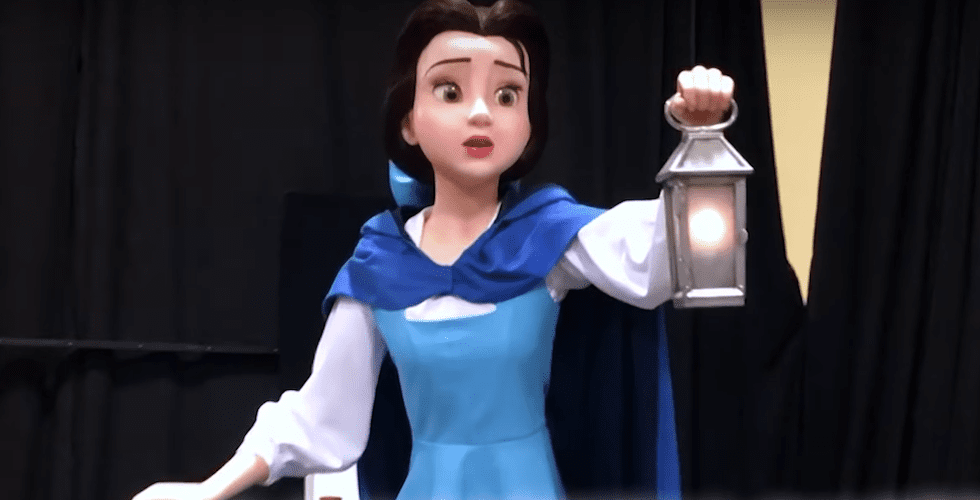 See the story of Beauty and the Beast come to life when this dark ride opens in 2020 at Tokyo Disneyland.

This new video gives theme park fans not only a look at an animated version of the attraction, but also showcases the ride’s animatronics, ride vehicle, and shares the name of the new dark ride: “Enchanted Tale of Beauty and the Beast.” 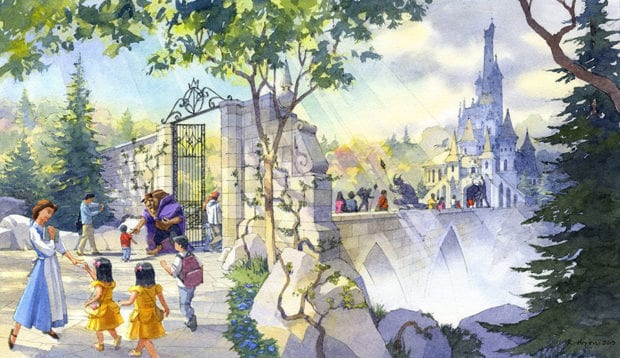 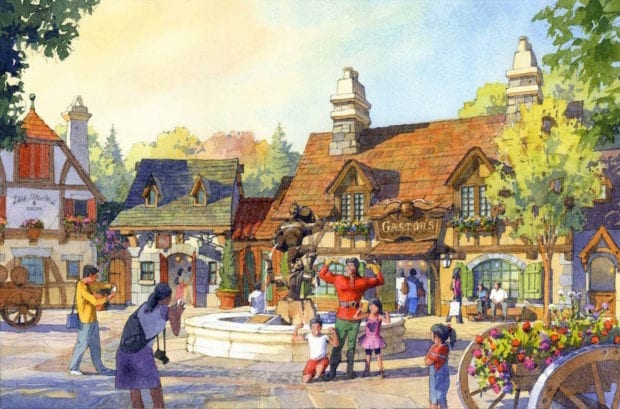 Nestled in an area of Fantasyland themed to the 1991 animated film, guests will not only get to explore the Beauty and the Beast Castle, but will also be able to peruse the nearby Village Shoppes and La Taverne de Gaston. 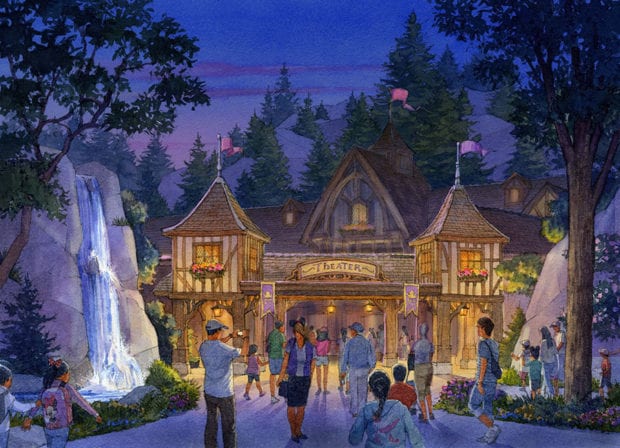 An artist’s rendering of the Fantasyland Forest Theatre.

Also opening in this new area is the Fantasyland Forest Theatre, which will feature Disney entertainment in a dedicated indoor performance space. The theater will seat 1,500 guests, and productions performed there will feature Disney characters and music that will surely delight audiences.

On “Enchanted Tale of Beauty and the Beast, guests will be able to step into the story of Belle, the Beast, and all the enchanted household objects as the “tale as old as time” unfolds around them.

The animatronics for this attraction mirror the style of Under the Sea – Journey of the Little Mermaid at Walt Disney World’s Magic Kingdom, utilizing physical faces and features, rather than the rear-projected, digital faces of Frozen Ever After at Epcot. 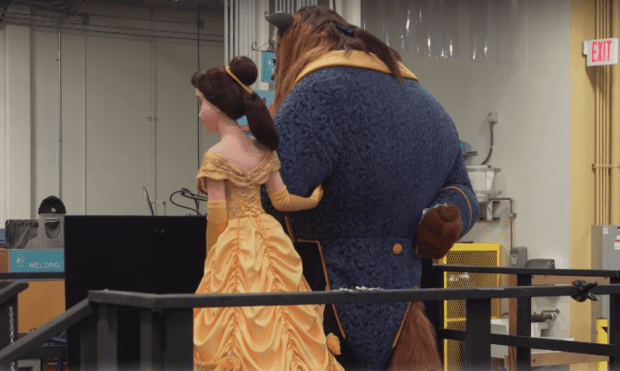 Belle, the Beast, Lumiere, Cogsworth, and even Belle’s horse Philippe will come to life before guests’ eyes, all looking very close to the classic Disney animation style fans know and love. The Imagineers have worked closely with teams at Walt Disney Animation, including artists who worked on the original film back in 1991.

A look at an animated sequence for the new attraction.

“We’re working with the Walt Disney Animation Studios to get their model and get their animation, and then our team here engineers and builds them, and then we program them using animation from the animation studios,” said Liana Zorn, creative technical director for Walt Disney Imagineering.

The ride vehicles will seat 10 people each.

Guests will travel through the attraction on a trackless ride vehicle, designed after the look of Mrs. Potts and Chip. The vehicle will move along with the story, evoking movements similar to dancing – which is exactly what guests will do with Belle and Beast in the iconic ballroom scene.

Guests will literally dance through the Enchanted Ballroom with Belle and Beast during their experience.

“To have them actually get that sensation of dancing or ice skating, or interacting with the figures as they go around – the vehicle feels like it’s alive,” continued Zorn. 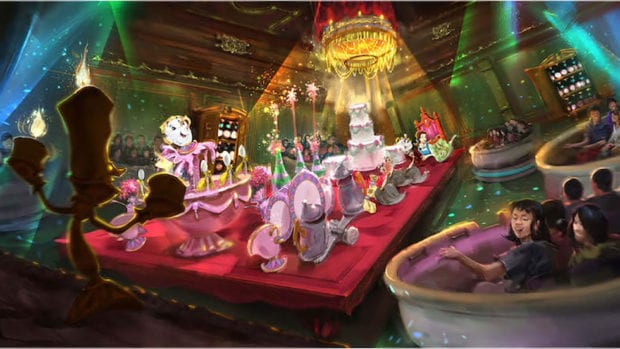 An artist’s rendering of the famous “Be Our Guest” sequence in the attraction.

The vehicles’ movement will be integrated not only with the music, but the movements of the animatronics and animated figures inside the attraction, creating a fluid and seamless experience.

Also revealed was new concept art for attractions in Tomorrowland and Toontown, all part of the vast expansions coming to Tokyo Disneyland. 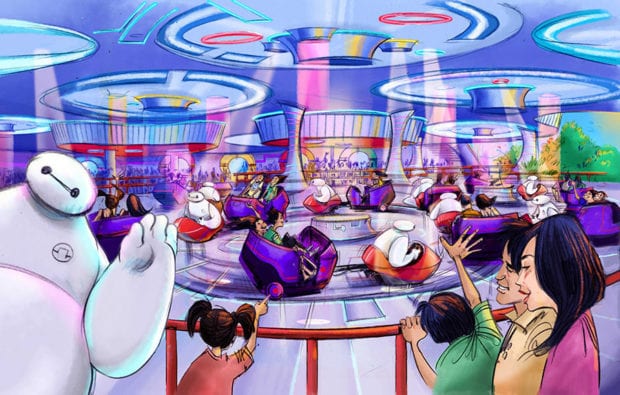 In Tomorrowland, “The Happy Ride with Baymax” attraction will be inspired by the healthcare companion from “Big Hero 6,” as guests will join their own companion for a fun, musical whip ride, similar to Alien Swirling Saucers at Walt Disney World and Mater’s Junkyard Jamboree at Disney California Adventure.

A new shop themed to outer space is also planned for the area, called The Big Pop. This new shop will offer popcorn in many different flavors, alongside Tokyo Disneyland’s popular popcorn buckets. 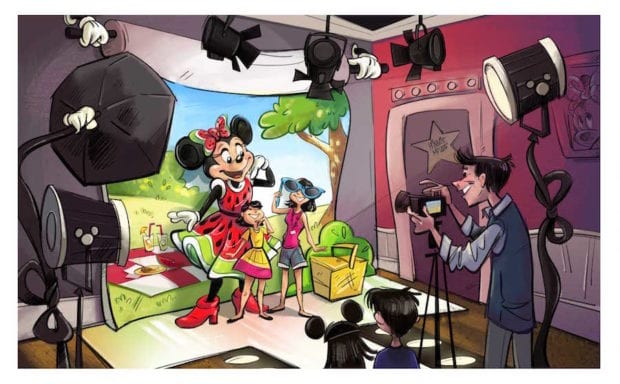 Over in Toontown, Minnie’s Style Studio will be the first character greeting location in Tokyo Disneyland where guests can meet and take photos with Minnie Mouse, dressed to the nines in her own fabulous creations.

An artist’s rendering of the overall expansions coming to Tokyo Disneyland.

Stay tuned to our website for more updates on the massive expansions coming to Tokyo Disneyland and Tokyo DisneySea, but until then, check out the first-look at “Enchanted Tale of Beauty and the Beast” below:

Review of Disney After Hours event at Animal Kingdom

Stars in the Parks: Shaq goes on...