Review of Disney After Hours event at Animal Kingdom

Disney has been offering an After Hours event at Magic Kingdom off and on for a couple of years. But they’re now offering it at Disney’s Animal Kingdom and Disney’s Hollywood Studios too. Here’s our review of the Animal Kingdom event. 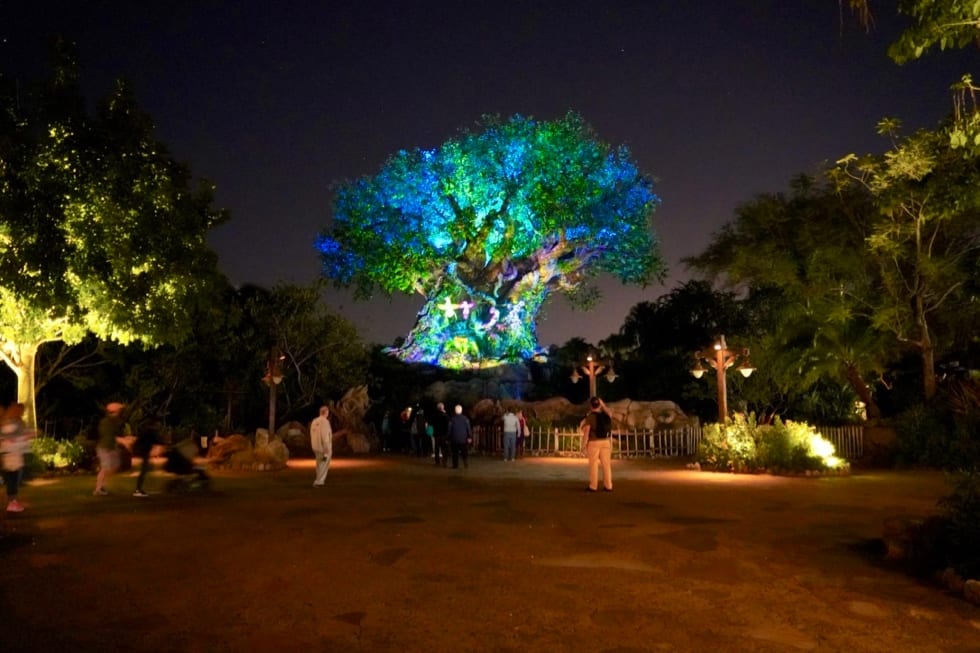 We reviewed the After Hours event at Magic Kingdom in 2016 when it was launched, but Disney also invited us to experience it on the first night it was opened up to Disney’s Animal Kingdom. (Look for our review of Disney After Hours at Hollywood Studios soon.)

For those who don’t know, Disney After Hours is a special-ticket nighttime event which offers you a chance to experience the theme park for three hours after regular park hours have ended. Ticket holders can enter the park as early as 7 p.m., even if they don’t have a regular day ticket, and even though the official event starts a bit later.

Since we’re annual passholders, we chose to arrive just before the start of the event, as the park was closing. The night we visited, the park closed at 8 p.m. and the event officially started at 8:30 p.m.

Here’s a look at the schedule we were handed along with our wristband as we entered the park. This is everything that’s available. 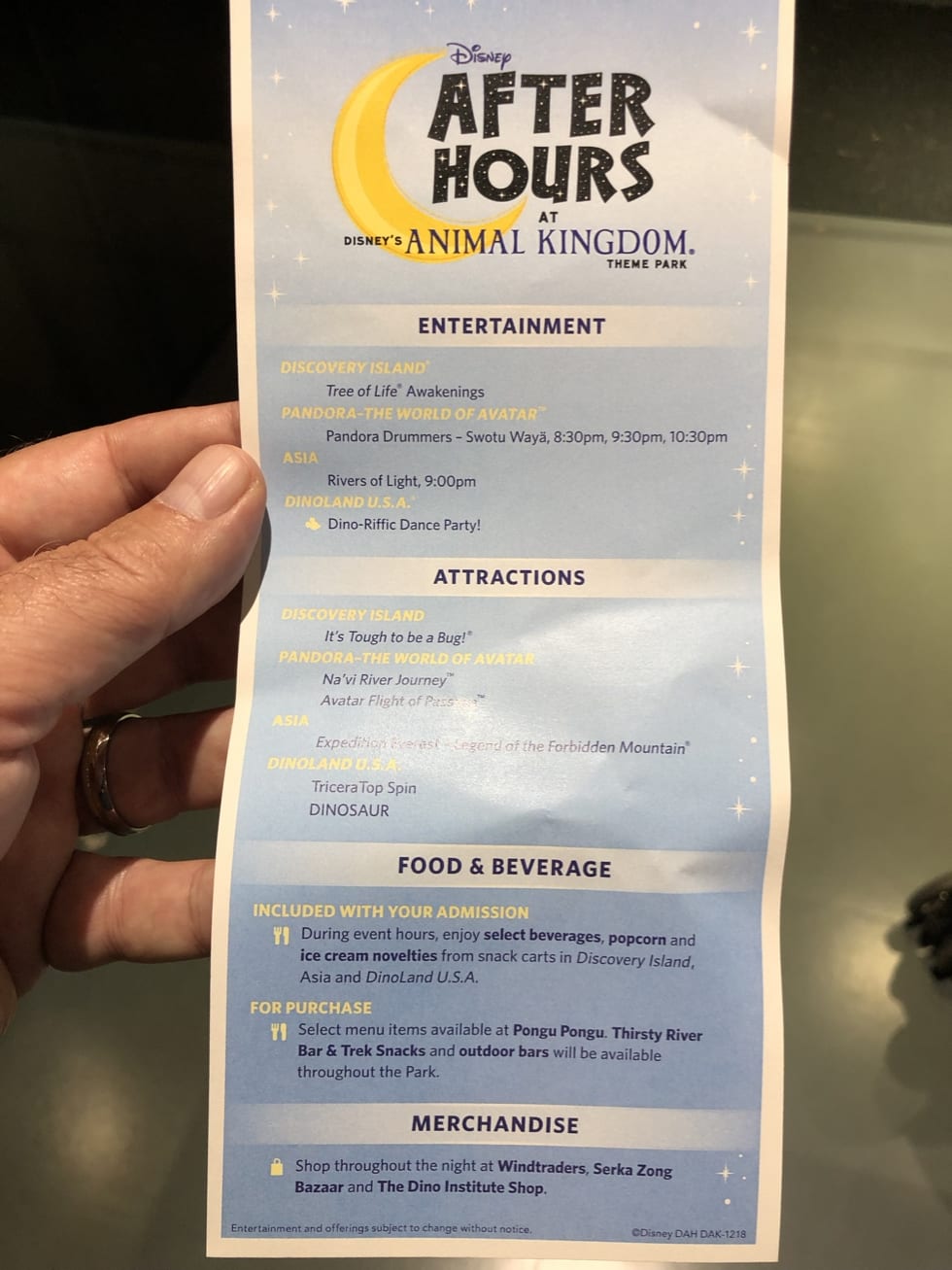 The first thing we noticed, since we hand’t eaten dinner, was that none of the restaurants that serve meals were open. Luckily we were at Animal Kingdom and could head right back outside the park and dine at Rainforest Cafe. So our first tip is, eat dinner before you arrive. Although we did see a stand selling hot dogs and chips later. 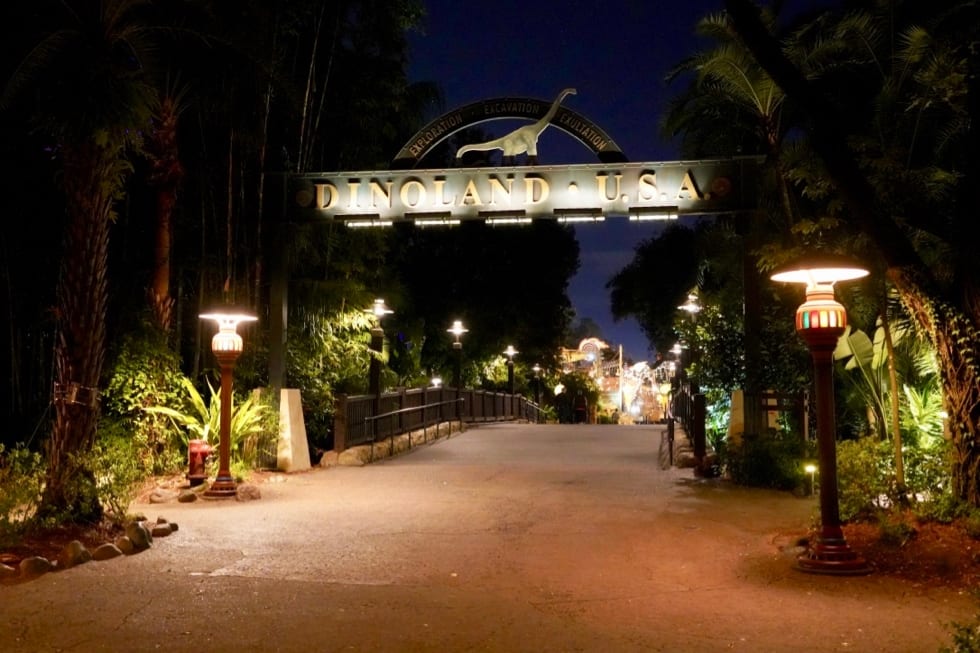 It was about 9 p.m. when we made it back into the park, time for the only showing of Rivers of Light. So we headed over. As you can see from this picture, the park was already pretty empty, even though it had just closed an hour earlier.

As part of #DisneyAfterHours at Animal Kingdom, there’s one performance of Rivers of Light. The theater seats are mostly empty. Sit anywhere you’d like. pic.twitter.com/ZVbRp5dpuG 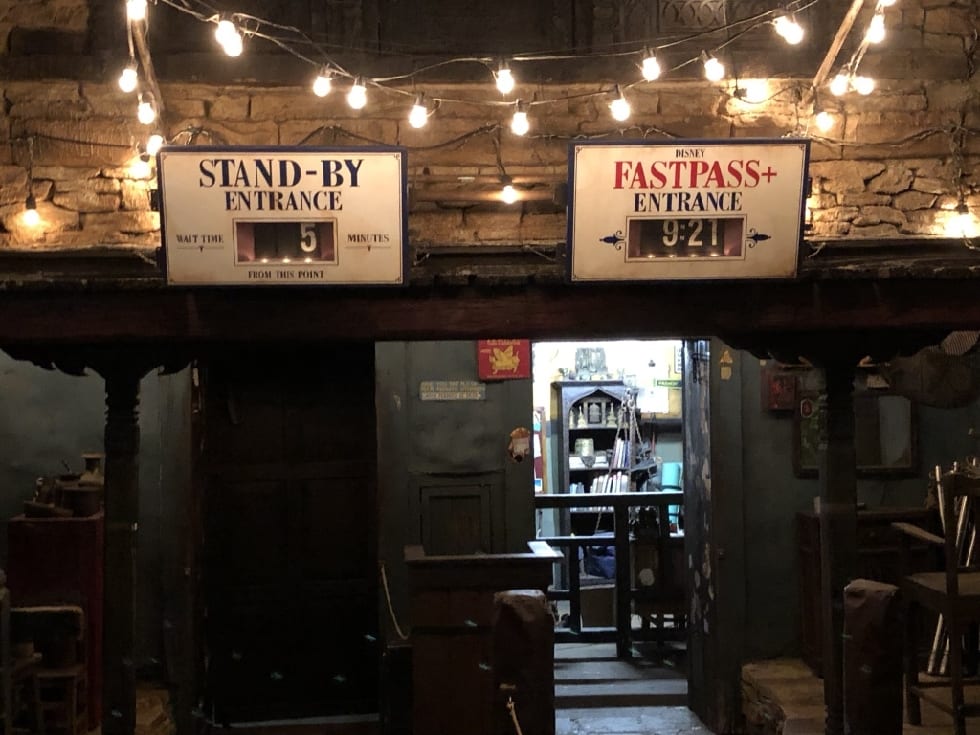 After the show, we headed by Expedition Everest. As you can see, it was a walk-on. But we saved our ride for later. 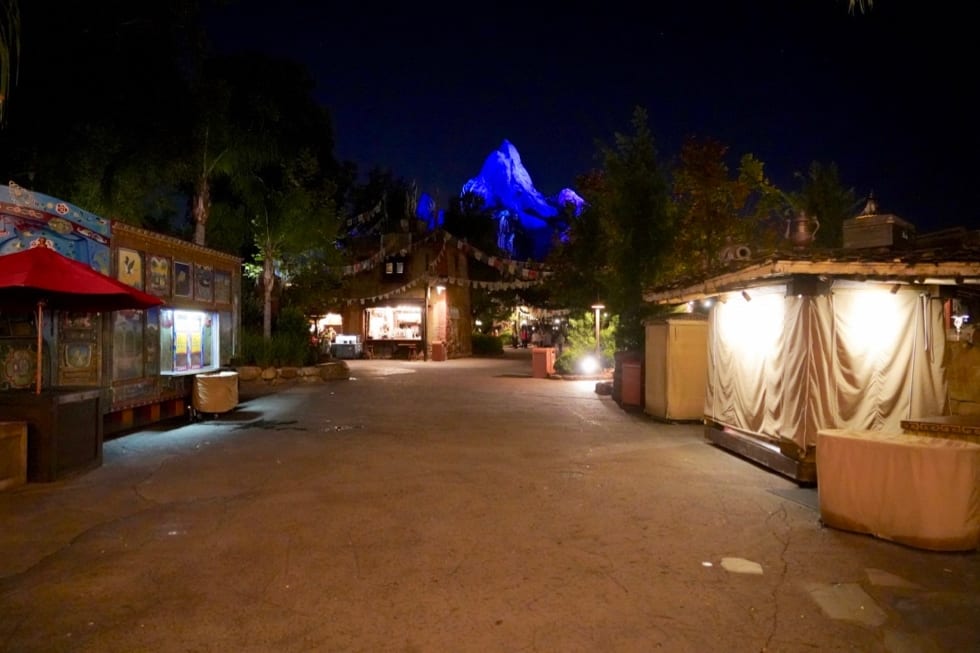 As with the After Hours event at Magic Kingdom, we especially suggest photographers go. You’ll be able to get photos like this without any other guests in them (with a little patience.)

But although you’ll certainly get some great photos, we don’t recommend Animal Kingdom over Magic Kingdom for photographers because the whole park isn’t open. I’m not talking about the rides. I mean because there weren’t any attractions open in the Africa area of the park, guests weren’t even allowed to walk through those areas. Cast member were blocking the path at the Yak & Yeti restaurant, and over by Starbucks. That leaves a whole corner of the park we couldn’t explore. 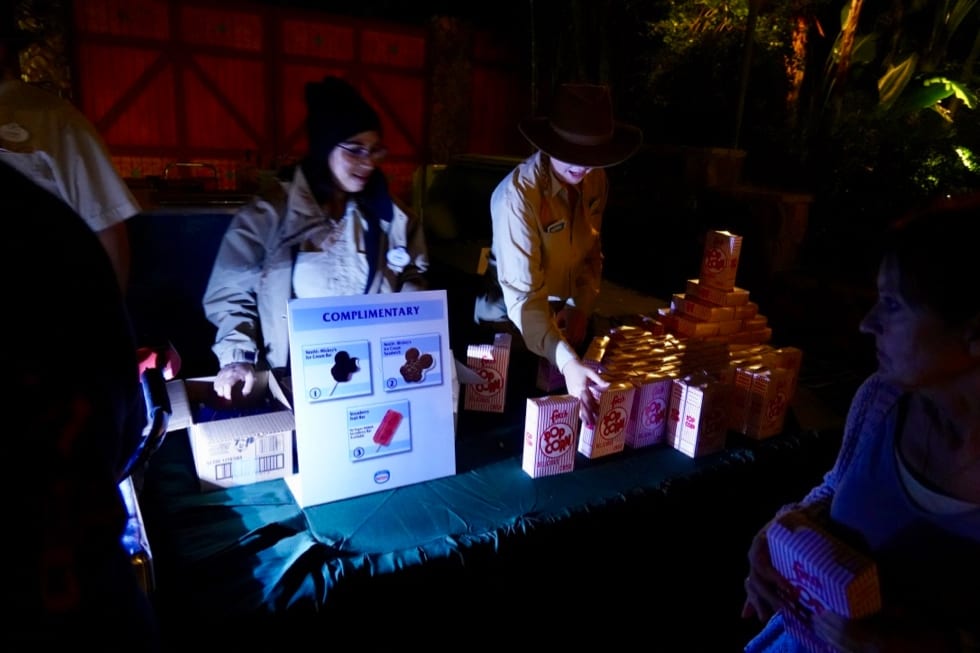 Next we come to the second best part of the event, the free snacks! At various locations around the park, you can have as much soda, water, Mickey ice cream bars and sandwiches and popcorn you’d like. This location, set up outside Pandora, was offering larger boxes of popcorn. Many other locations were only offering popcorn in drink cups. But the small size is no problem when it’s unlimited. 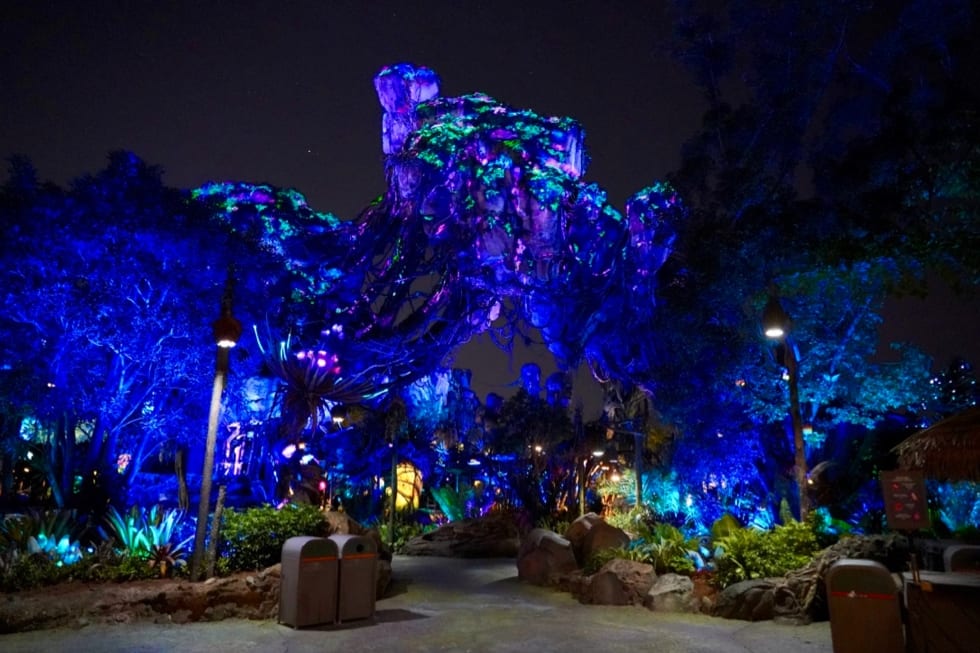 Pandora – The World of Avatar! 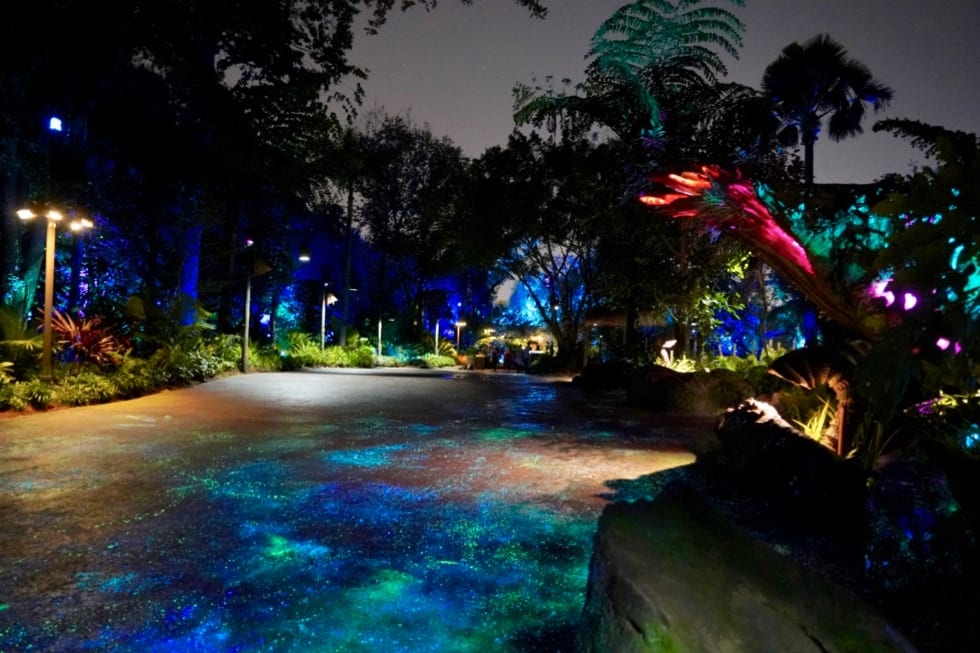 As you can see, you can really see the beauty of Pandora at night when there aren’t a ton of people milling around. And the even better part, no lines for either ride!

Just strolling through Pandora with no crowds during #DisneyAfterHours pic.twitter.com/Yfo6f4KBLf 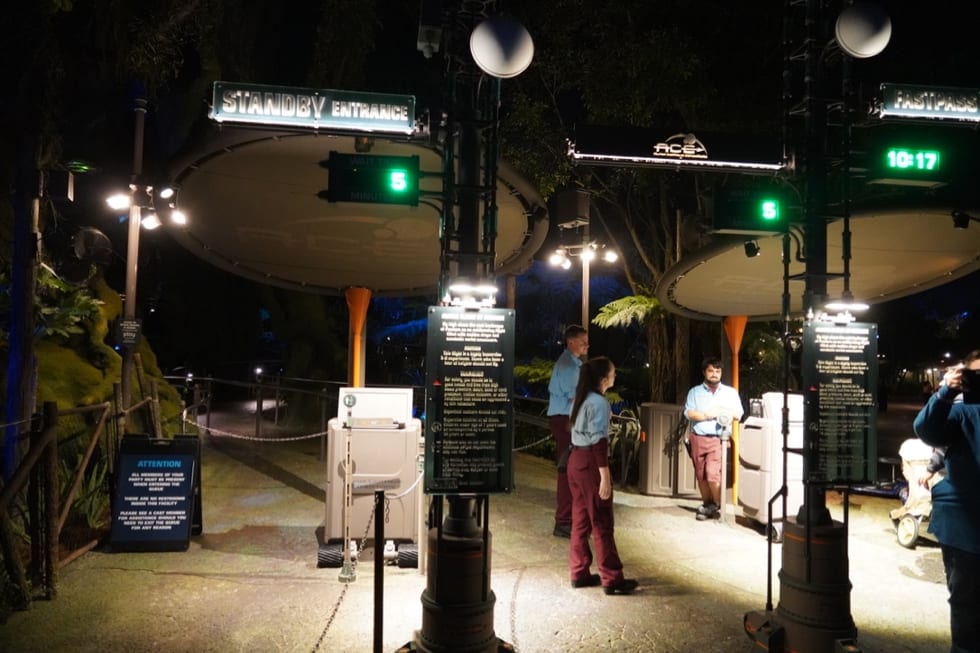 Look at that! It’s a five minute wait for Flight of Passage. You never see that during the day. In fact, just before the park closed, the wait was 160 minutes. 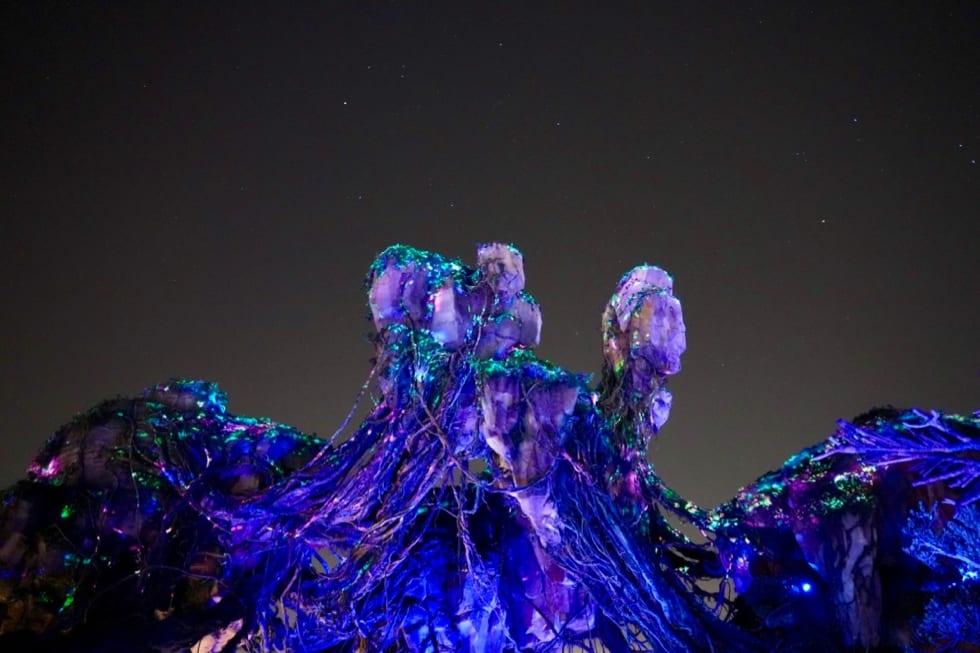 You can take this picture when the park is crowded, but I wanted to show it to you because I love how you can see the stars above the floating mountain.

One note about the rides. Since the lines are so low, to get to the rides faster, all the attractions were using the FastPass+ lines. For Flight of Passage, this means you miss most of the elaborate queue. But ask a cast member and they may let you go through the regular queue anyway to take photos. One let us when we asked. 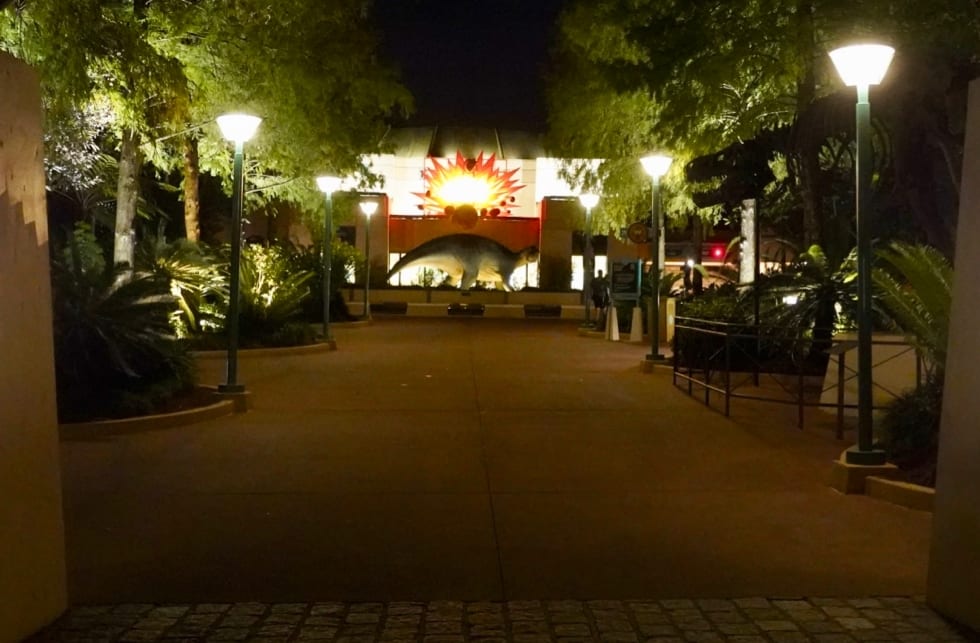 Next we headed around the park again, doing the rides we missed the first time. First up was Dinosaur. 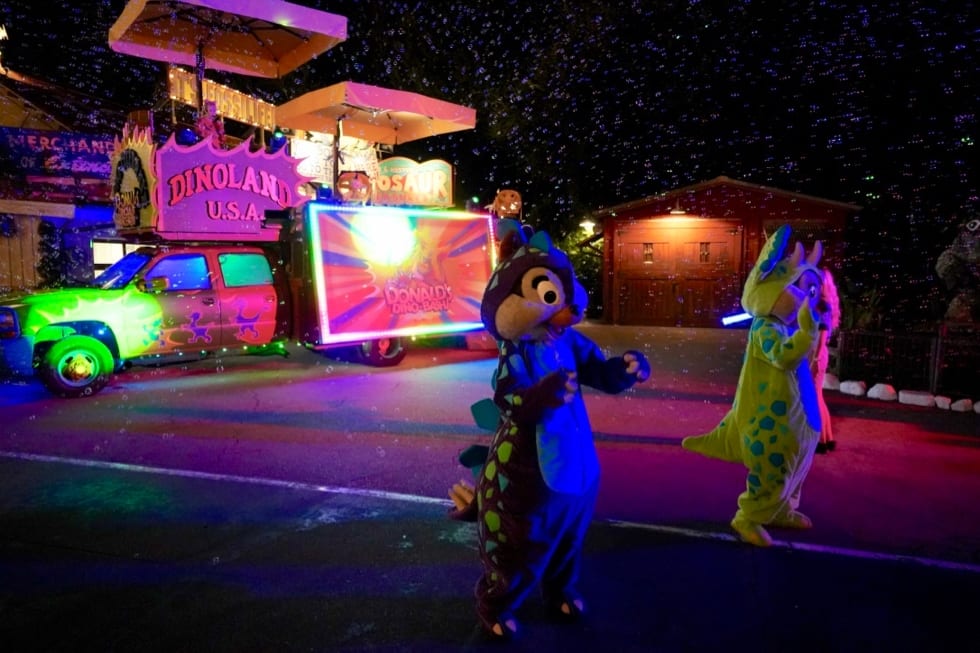 There is a dance party in Dinoland with Chip & Dale dressed as dinosaurs. You can also see them during the day, but with the low crowds, you’ll practically have them to yourselves. 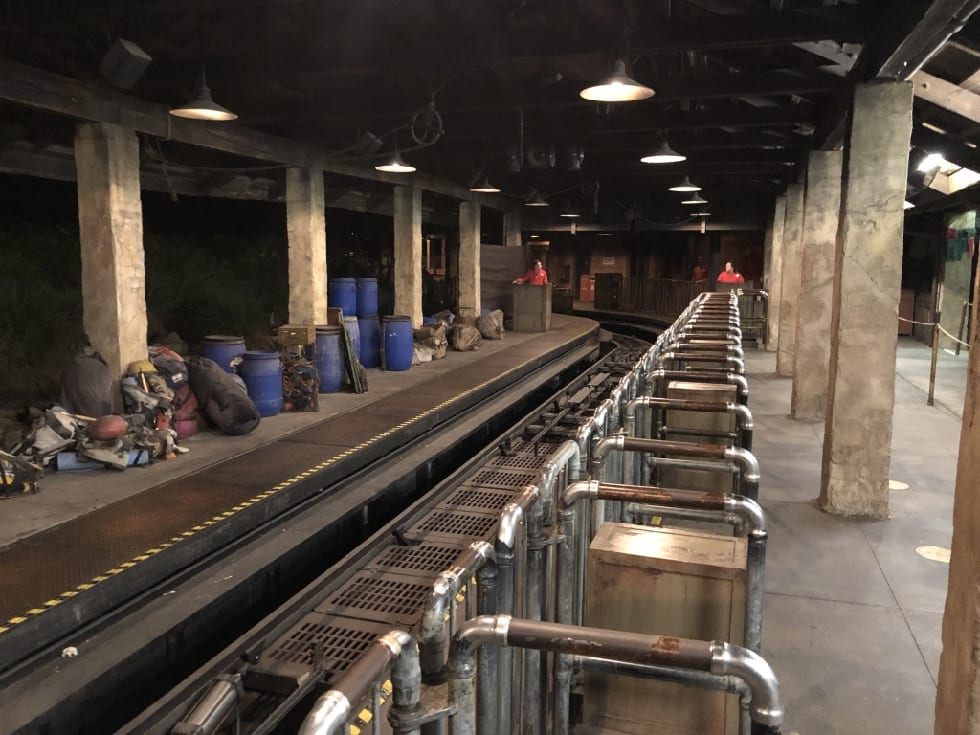 With the parks at such a low capacity for the event, you can ride the rides by yourselves. This makes for some very cool photos, especially on Dinosaur. 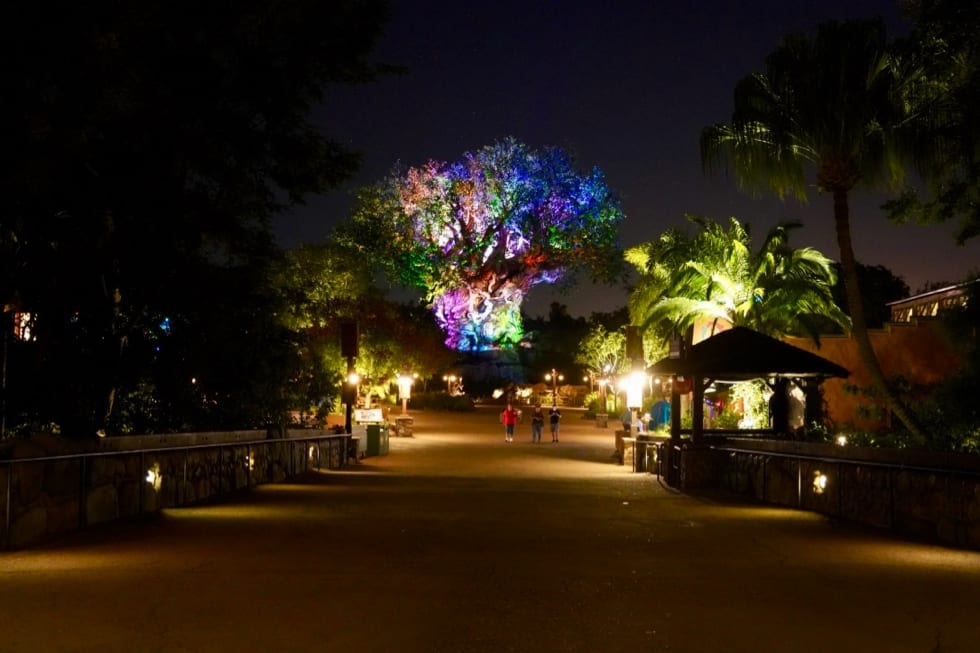 All Disney After Hours event tickets are $125 per person in advance, and $129 plus tax for day-of purchases. A discounted price of $95 is available for Disney Vacation Club members and Annual Passholders.

So is it worth it? That’s up to you to decide. We recommend it for photographers and those who’d love to visit Pandora without any crowds or waits. But overall, Magic Kingdom has more to offer during their events and the whole park is open.

To learn more about Disney After Hours events, visit DisneyWorld.com/AfterHours.

Also read our review of After Hours at Magic Kingdom and Disney’s Hollywood Studios.

Wow! So happy to come across this article – I didn’t know about the after hours event! This is definitely to be shared!

Question. What about characters? Are there any character meet n greets at after hours at AK, MK,or HS? I can probably only afford one after hours my next trip, and I’d like to go to one with rarer characters if possible. Also, are photos taken on the rides for you still at after hours events?

You have easy access to the characters who are there, but they don’t have any characters that they don’t also have during the day. Yes, your ride photos still work.

“As with the After Hours event at Magic Kingdom, we especially suggest photographers go. You’ll be able to get photos like this without any other guests in them (with a little patients.)”

Patience is a noun and is a human character trait. Its adjective form is patient. … A patient refers to someone who is receiving medical care.

If the Flight of Passage has a 160 minute wait at park closing, wouldn’t that long wait eat into the after hours timeframe? Is it suggested to go do other rides first at 7, then go to Pandora later? Also, are you able to book fast passes from 7-8 ahead of time once you purchase a ticket to the after hours event?

Yes, do Flight of Passage later in the night when the wait time is down. When the park closes, that wait is often wrong though, as fastPass stops so the regular line moves much quicker. You can not book FastPasses with an After Hours ticket.