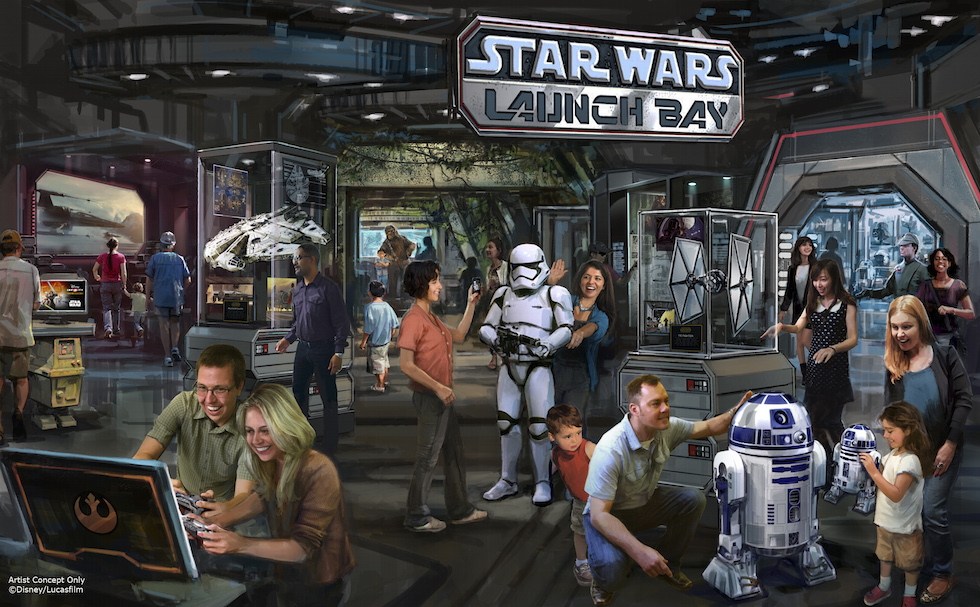 While everyone is excited for the new Star Wars land coming to Disney’s Hollywood Studios and Disneyland, that will take a while to build. But guests can be part of both new and enhanced experiences in the parks in just a few months.

Star Wars Launch Bay
This interactive experience will take guests into the upcoming film, Star Wars: The Force Awakens, with special exhibits and peeks behind-the-scenes, including opportunities to visit with new and favorite Star Wars characters, special merchandise and food offerings. Star Wars Launch Bay will be located in the Animation Courtyard at Disney’s Hollywood Studios and in Tomorrowland at Disneyland park. Both experiences will be available for guests later this year.

Star Tours – The Adventures Continue
Later this year, Star Tours will include a new adventure featuring locations and characters from the upcoming film, Star Wars: The Force Awakens, giving guests a new adventure in the Star Wars galaxy.

Jedi Training Academy
A favorite of younger fans is reimagined with a new experience that includes new characters and a new villain to battle from the popular Disney XD series “Star Wars Rebels.”

Season of the Force
This new seasonal event, beginning early 2016, brings new experiences to both coasts.
At Disney’s Hollywood Studios, guests will close out weekend nights with a new fireworks spectacular set to the iconic score of the Star Wars movies.
In Tomorrowland at Disneyland park, guests will explore the Star Wars galaxy with special entertainment throughout the land, themed food locations and more. Guests also will be thrilled to climb aboard Hyperspace Mountain, a reimagining of the classic Space Mountain attraction, in which guests will join an X-wing Starfighter battle.

Here’s a look at the full Star Wars Land presentation at the D23 Expo 2015:

Soarin’ getting an update, plus news for Disney’s Animal Kingdom from the D23 Expo