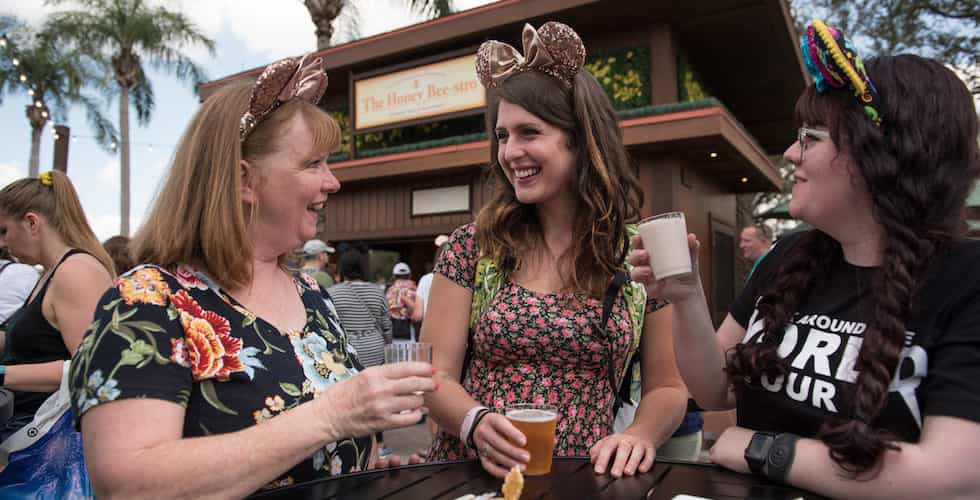 Celebrate National Beer Day on April 7 with one of the unique and unusual beers you can find at Walt Disney World Resort.

Today is National Beer Day, and what better way to celebrate than by grabbing a unique and delicious brew at Walt Disney World. Check out our list of beers that can’t be missed:

This beer is a collaboration between Morimoto Asia and Crooked Can Brewing. The Sakura Kolsch, or Cherry Blossom Kolsch, is dry hopped with cherry blossom tea. This unique beer is the perfect compliment to many of the dishes at Morimoto.

One of the most highly coveted beers in the world, this Belgian brew is brewed only five months a year, and is cooled off and inoculated with wild yeast that floats in from the open windows. The yeast then settles in the Koelship, which uses the cooler fall and spring air to cool the wort and give the yeast its flavor. The Edison’s current selection special is the rare version Fou’ Foune, or a Lambic aged on apricots.

Translated from Italian as “fragrant beer,” this brew hails from Parma, Italy and borders on a Belgian pale ale style, but with more aroma and fragrance. This beer pairs well with 24 month-aged prosciutto di Parma.

This Pandoran brew features an herbal spice hop aroma with notes of caramel, toffee and nuts.

This original bourbon barrel-aged stout has notes of chocolate, vanilla and roasted barley, and fits right in to the speakeasy bar of Enzo’s Hideaway.

This beer from First Magnitude Brewing Co. in Gainesville, Fla. is smooth and a little sweet. Dark in color, this milk stout is like the creamer in your morning coffee with just a bit of a kick.

This Playalinda Brewing Company beer comes from Titusville, Fla. and is perfectly sweet and sour.

This beer is brewed with orange peel and hibiscus, making it light and fruity. The ale has a light pink hue with a floral aroma and light citrus notes to blend with the rosy-tart flavor of the hibiscus. A subtle malt sweetness supports the floral notes, making this complex beer easy to drink and enjoy.

This African-inspired deep amber ale is brewed only for Walt Disney World with a sorghum and a special blend of spices, including cardamom and cinnamon.

This beer was launched in the spring of 2003 as part of the Signature Series of Rogue Ales with Chef Masaharu Morimoto. It features a flavor of roasted Soba that brings a nutty finish to this light and refreshing ale.

This light, wheat ale is made by Terrapin Beer Co., and is a Golden Ale with a green color, and has flavors of citrus and wheat with a creamy finish.

Session Premium Lager is a smooth, crisp and refreshing import-style lager with a creaminess when swished around.

Stop in at Dawa Bar for this refreshing lager with a subtle citrus taste to help you cool down on a hot day.

This beer is very citrusy with a hint of bitterness that brings a lemon candy flavor to the surface that’s balanced with hop spice.

This beer is served in a green bottle sculpted with a laughing buddha. A true Asian-style lager, this beer has a clean, crisp finish that makes for the perfect refreshment.

This is the first beer Unibroue ever brewed with pale golden, Belgian white ale, and pairs perfectly with the fan favorite Canadian Cheddar Cheese Soup, or the Oatmeal Stout-Braised Short Ribs.

This Bavarian-style wheat beer has hints of clove and banana on the nose from its German yeast. The beer hosts a medium body with a smooth, crisp finish.

Why cant every day be national beer day?! Great article!