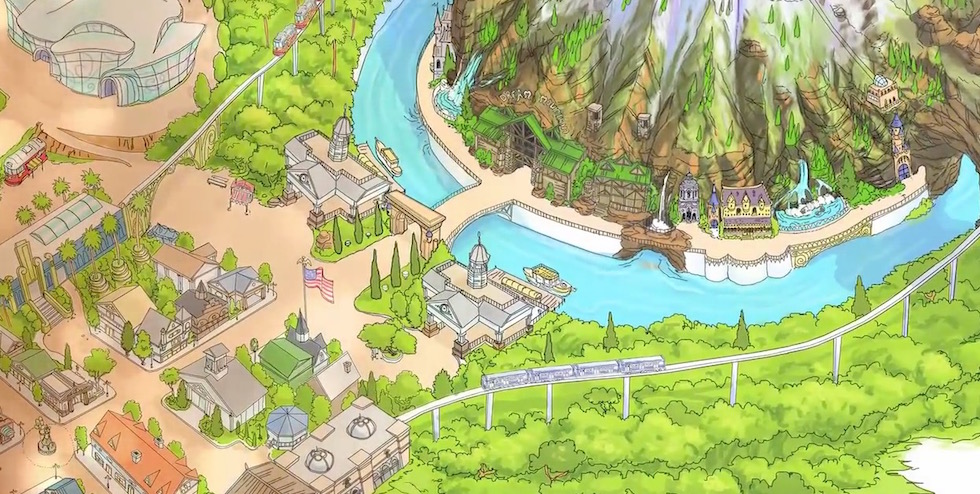 When we wrote our exclusive story for “Attractions Magazine” about the plans for a record-breaking theme park in Texas three years ago, we didn’t envision the follow-up article would be about a major fraud case and the prison sentencing of the man who drove the DreamVision project into a financial crater.

But, when Bryan Robinson was handed a 10-year sentence on March 21, and ordered to repay more than $7 million to investors he duped over the massive park scheme in Muscle Shoals, Ala., it was obvious something had gone massively, criminally wrong, so we caught up with one of the original pioneers – and, ultimately, one of the victims – of the DreamVision idea, Ron Logan. His story reads like something out of a novel.

As we detailed in 2014, Logan – a Disney Legend who was an executive producer for Walt Disney Entertainment – was the chief creative officer for the fledgling DreamVision animation and entertainment company, and the motivation for the company’s founder Rick Silanskas, who came up with the inspiration for a Disney-rivaling theme park in North Texas.

Together, the two creative forces had a solid vision for what they called the DreamScape resort, founded on a colossal centerpiece, DreamVision Mountain, all of which would be engineered by some of the biggest names in the theme park business, with the kind of innovation and ingenuity that we usually only saw from Disney and Universal.

Where some saw pie-in-the-sky hopefulness, the DreamVision team saw an opportunity to revive a jaded – and profit-driven – business, underscored by an animation division that had already delivered some cutting-edge new techniques, marrying traditional methods with all-new CGI technology. The blueprint was dazzling.

But, as they bid to put together the multi-billion-dollar financing the project required, Silanskas met up with Robinson, who had a vision of his own, for a vast music-themed park and resort in Alabama, close to the home of the renowned Muscle Shoals music studio that had given rise to the likes of Aretha Franklin, Percy Sledge and the Allman Brothers.

Robinson was well known in the area, and vowed he could find the finance to underwrite the massive project, which also quickly became DreamVision’s prime focus. They commissioned Grammy Award-winning artists to provide music and met with Oscar-winning Disney composer Alan Menken. And then things spiraled out of control, ending in Robinson’s conviction last month on charges of securities fraud and that 10-year prison sentence.

As it turned out, while Robinson raised several million dollars in investments – and commissioned some lavish creative ideas – much of the money was used in Ponzi-style payments to other unrelated investors, according to the Alabama Securities Commission. The front man pled guilty, and DreamVision imploded.

It has left Logan – with his 23-year Disney career – looking back in a daze at how it all went so drastically, catastrophically wrong. “He sounded great on paper, and he showed us everything we asked for,” Ron told us. “I have had experience of things like this in the past, of different ventures, and I am always suspicious when somebody says they have the finances.

“But I had no signs whatsoever that this guy wasn’t real. There wasn’t anything I could find when I researched him that said it wasn’t real. Muscle Shoals itself has a great background in the arts and, when we went there to look at the property he had in mind, it looked ideal. It had all the infrastructure we needed, and we thought ‘Wow, this could be a great place.’

“So we decided we would work on both projects at the same time and hired a lot of people. He did come through with a couple of million bucks in various ways. I never knew the detail of it as that wasn’t part of my job, but we had no reason not to trust this guy. He brought in the Country Music Association and he was a hero in that town. He knew everybody. It was all A-plus.

“We designed the whole [music park] concept on all genres of music and we got more and more involved, as crazy as it sounds. I mean, who in the world builds two theme parks at the same time, right? But we said, ‘OK, let’s see where this goes.’ We had people flying in from California for meetings, and I’m talking about the top people in the game. Then he wanted to do a Broadway show and we went up to New York and met with Alan Menken, and even he was impressed with this guy.”

Sadly, Logan and his DreamVision compadres weren’t the only ones who thought Robinson had all his financial ducks in a row. More than 40 Alabama investors were also taken for a ride, hence the $7 million-plus that is owed in repayments to them. But there is no financial salvage for DreamVision, and the ‘dream vision’ has truly died.

“The whole thing came crashing down, in Texas and Muscle Shoals,” Logan admitted. “It was instant. We were just told, there is no more cash. That’s it. And then all the lawsuits start, which really destroys everything. I’m not used to that kind of stuff, because I am very careful about what I do and I don’t get anyone involved with anything that isn’t good for them. And our reaction to the whole situation was like, ‘What?’ It was just a terrible, terrible time.

“Ultimately, I think he just got in over his head. We had people, other potential investors, in the Fort Worth area who were really interested, but he just wanted to be the one in charge, the chief investor. He was a very confident guy, he was charismatic, and it was totally unexpected. All this that he was actually doing behind the scenes, nobody saw, and that is the ultimate tragedy.”

In the end, DreamVision was undermined by the size of its dreams – and a financial predator who had dreams of his own, that finally became a nightmare. An Alabama court has put an end to it, but that is no consolation to Logan, and the others who worked on the fantastical idea, many of whom are also believed to have been left out of pocket.

“We had everyone in the industry behind this,” Logan confirmed. “We had the best of all the people who had worked with me to work on these projects. We did some great stuff. Some day, we will work on it again, but, right now, it is dead. And that is just a great shame.”

Drawn to Life, Eternals in Avengers Campus, and...

What Mr. LOGAN seems to forget is he was allegedly paid handsomely for his advice and council and was in a position to put the brakes on at any time but his own ego prevented him from doing the right thing. This was his and his buddies last chance to be viable in the industry that he allowed it to overshadow his judgement.

I think you’re being a bit harsh, Redon. Ron Logan was actually just a consultant on the parks in the final analysis and had no control over how the project was driven. Although he wouldn’t say so, it’s our impression he was one of those left out of pocket at the end, with almost a year’s work going unpaid. Ultimately, it’s just a very sad story of a smooth-talking conman taking investors for a ride. It’s not uncommon in business, just extremely rare for the theme park industry.

I cannot speak to whether Ron was paid handsomely or at all. Robinson did give the DreamVision team a sum of money, expected to be about $5M, to start the process of feasibility studies, imagine and concept a landmark type of presentation for further investment entities.
Sadly, with Robinsons’ injection of money, the DreamVision Senior Executives, Rick Silanskas, Vince Silanskas, Cris Silanskas, and Joe Drummond mismanaged the funds and paid themselves handsomely for their service and repaid outstanding debt from prior attempts to get the project underway to the tune of several hundreds of thousands of dollars. The stories of the DV teams actions should also be questioned. They scuttled the ship leaving many, including myself, with a couple hundred thousand dollars in services unpaid collectively, while few people packed up their homes and families and left to Utah for what was suppose to be their New Corporate office to show up and with no job or office to work out of. That is people who do not care about anyone else but themselves.