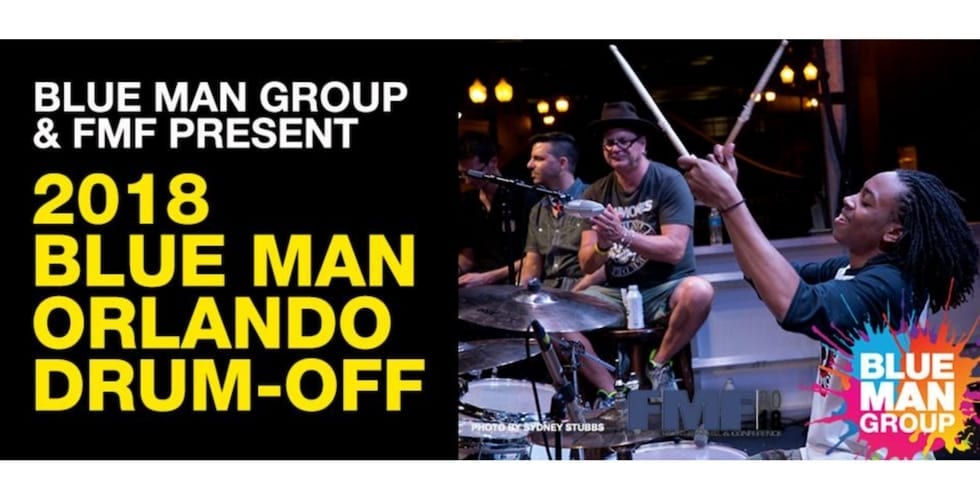 Blue Man Group is hosting an Orlando Drum-Off competition this May.

Blue Man Group is teaming up with the Florida Music Festival to host the 2018 Orlando Drum-Off competition, taking place May 11-12 in downtown Orlando.

One lucky drummer will have the chance to win $5,000 in prizes and get to perform live during the closing night of the Florida Music Festival on Saturday, May 12 in downtown Orlando.

Now through April 30, Blue Man Group invites drummers from across the country to upload a video of their finest performance to YouTube or Vimeo with the hashtags #BlueManDrumOff and #Contest, and submit a link to their video here.

“I am always eager to see and hear the contestants at the annual drum-off competition,” said Kevin Connolly, a percussionist with 17 years of experience at Blue Man Group. “The level of showmanship and creativity is incredibly inspiring and these drummers exhibit one of the best parts of being a musician: the exuberance and thrill of performing in front of a big crowd!”

The Drum-Off selection panel, made up of Blue Man Group musicians and performers, will choose up to 20 drummers from the video submissions to perform live at the semi-finals on Friday, May 11 in downtown Orlando. The panel will then choose five finalists to perform a 90-second live set at the Wall Street Plaza Main Stage on the final night of Florida Music Festival on May 12. The winner will be announced afterward.

“One of the annual highlights of the Florida Music Festival is being able to collaborate with the internationally-renowned performers of Blue Man Group,” said Sean Perry, co-founder and co-owner of Florida Music Festival. “The opportunity to expose dynamic future percussionists to the Blue Man network, the attending music industry, and enthusiastic crowds has been one of the more rewarding aspects of this culturally-infused weekend in Orlando.”

Complete officials rules and details on the competition can be found online at BlueMan.com/OrlandoDrumOff.

May-Hem convention to return with cast from...