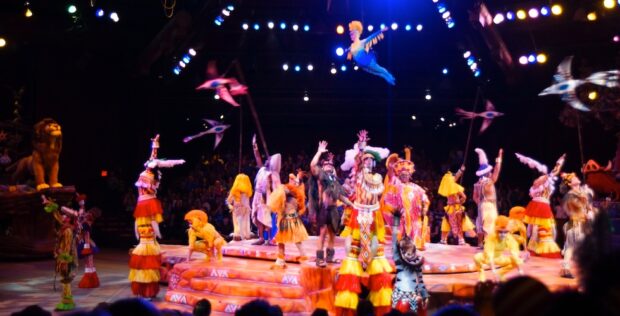 Yesterday, Jan. 5, 2014, Camp Minnie-Mickey, a section of Disney’s Animal Kingdom that’s been around since the park’s opening day, closed to make way for the Avatar expansion.

Camp Minnie-Mickey was originally supposed to be temporary, as the Phase 2 expansion of Animal Kingdom was going add a land called Beastly Kingdom in its place, but when that project got canceled, the land stuck around. A reminder of what almost was could still be seen up until the closing day. As you crossed the bridge to Camp Minnie-Mickey, you could look down at the river on the right and spot a running waterfall coming out of a rock formation shaped like a dragon.

Throughout its years at Animal Kingdom, Camp Minnie-Mickey served as a place to meet Disney characters and take in a couple of shows. One, Pocahontas and Her Forest Friends, ran off and on until 2008. The other, Festival of The Lion King, continued to entertain guests daily until closing day. Eventually the theater space for Pocahontas was used as stroller parking for the Lion King show.

Festival of The Lion King will be on hiatus while the new theater is being built in the Africa section of the park. The interior of the new theater will be similar to the old one, with air conditioning and the same audience capacity. Rumors say the show may undergo some changes during the downtime. You can watch the final showing of Festival of The Lion King in its original Camp Minnie-Mickey theater here:

Over the next three years, the area will transform into the world of Avatar as Pandora comes to life. You can read more about it and see some concept art for the area on our blog.

With a very sad tone, the appropriate words have got to be: ‘at last!’

I’m not at all impressed by the gap in the Festival of the Lion King show, (I’m sure Disney could have done more), but thank goodness that Disney’s Animal Kingdom is moving forward.
As one of my favorite parks, it really needed the boost of a major new development to keep guests happy, but the limelight is going to shine on Universal for a long while yet until this exciting new area opens.

Golden Snitch to Universal for amazing planning and foresight!

It will be good to get something new to DAK, but I’m not sure I’m ready to see Avatar Land there.

Movie Review: ‘Inside Out’ not Disney•Pixar’s best...