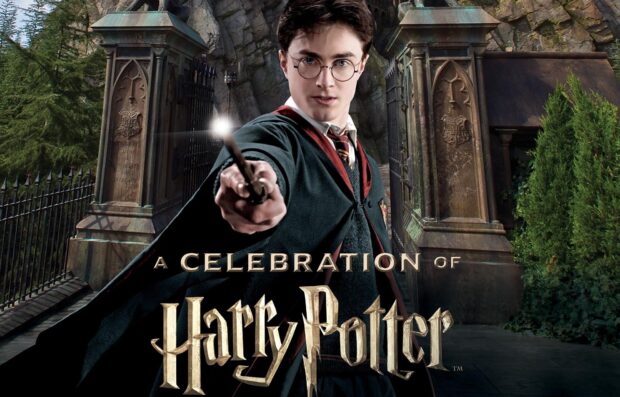 Universal Orlando Resort and Warner Bros. Entertainment are hosting a special event that will celebrate all of Harry’s adventures, from the beloved books to the feature films, called “A Celebration of Harry Potter” from Jan. 24 to 26 at Universal Orlando.

Fans will enjoy experiences such as a Harry Potter Tribute on Friday night, a Harry Potter Expo, panel discussions with film talent and crew, and more. Access to “A Celebration of Harry Potter” is included with regular theme park admission or an annual pass. Those without a pass can experience the full offering with a three-day park-to-park ticket. Admission into panel events will be granted on a first-come, first-served basis.

“A CELEBRATION OF HARRY POTTER” PANEL DISCUSSIONS
The panels will be held in a theater-style setting and will include discussions and Q&A’s with Harry Potter film talent and crew. Admission into the theaters will be granted on a first-come, first-served basis. Specific panel times will be released at a later date.

Dueling Demonstration & Wand Combat Masterclass with Paul Harris
3:30 – 4:15 p.m. Saturday; 11:30 a.m. – 12:15 p.m. Sunday
Islands of Adventure Toon Amphitheater
“Warner Bros. Studio Tour London – The Making of Harry Potter” will present a spellbinding masterclass with the world’s only Wand Combat Choreographer, Paul Harris. Paul choreographed the battle scene in Harry Potter and the Order of the Phoenix and will be on hand to teach you the technique behind wielding a wand.

Graphic Design for the Harry Potter Films with MinaLima
2 – 2:45 p.m. Sunday
Islands of Adventure Toon Amphitheater
Graphic designers Eduardo Lima and Miraphora Mina from the studio MinaLima will discuss their ten-year involvement in establishing the visual graphic style on the film productions of Harry Potter and present some of the iconic props they created for the films, including the Marauder’s Map, the Daily Prophet and The Quibbler.

Go Behind the Scenes of Pottermore.com from J.K. Rowling
11:30 a.m. – 12:15 p.m. Saturday
Islands of Adventure Toon Amphitheater
Pottermore’s Creative Director gives an exclusive insight into the creation of artwork for Pottermore.com, and a look at the next installment of Harry Potter and the Goblet of Fire. Plus, get ready for an exclusive reveal as he shares his favorite upcoming new entry from J.K. Rowling.

4 – 6 p.m. Friday, 9 a.m. – 7 p.m. Saturday and Sunday
Universal Studios Soundstage 33
The Harry Potter Expo will be held inside a Universal Orlando soundstage and will be open to guests throughout the weekend. The expo will include booths and exhibits that will give guests deeper insight into the various manifestations of the Harry Potter series. Expo booth descriptions are below:

Harry Potter: The Exhibition
Guests will get an up-close look at the artistry and craftsmanship that went into creating the iconic costumes that have appeared throughout the Harry Potter film series. They will also have the opportunity to get sorted into Hogwarts houses during a Sorting Hat experience.

MinaLima
Limited edition artworks and reproductions based on original prop designs will be on display, including iconic pieces, such as the Marauder’s Map and the Daily Prophet. A selection of original graphic props from the films will also be on display, and on-hand to meet guests will be Miraphora Mina and Eduardo Lima.

Pottermore from J.K. Rowling
Go behind the scenes of Pottermore.com from J.K. Rowling. Find out how Moments from Harry’s story are created from the first sketch to the final splash of color, get an exclusive look at artwork that has not yet been released, and experience Pottermore.com for yourself – defeat your opponent in a wizard’s duel or try your hand at brewing magical draughts and potions.

Scholastic
Celebrate the 15th anniversary of the U.S. publication of Harry Potter and the Sorcerer’s Stone and share your message about what Harry Potter means to you. Award-winning artist Kazu Kibuishi, who recently reimagined the Harry Potter book covers, will be signing posters at limited times throughout the weekend.

United States Postal Service
Guests can check out the limited-edition Harry Potter collection of 20 new Forever stamps, featuring images of Harry Potter, the extraordinary boy wizard, and the adventures he encounters with the friends, heroes, villains and creatures that make up his world. Also, see collectible products featuring the stamps, meet the stamp art director, and get special cancellation postmarks commemorating this celebration.

For more information about the event and tickets, visit UniversalOrlando.com/Celebration.

Thunderbirds fly over the Magic Kingdom to...