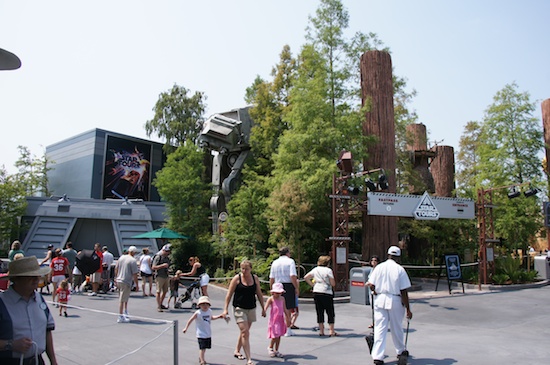 Cast members at Disney’s Hollywood Studios have begun previewing the new Star Tours ride that officially opens next Friday. From early comments on Twitter, they love the updated 3D ride.

Below are some Tweets from cast members who have ridden tonight. Beware, some of the comments contain spoilers. If you don’t want to know anything abut the ride yet, don’t read ahead.

@DisneyMagicMan:
• A defective Rex is in the queue!! he even has some audio.
• There’s a small Incredibles reference in the Baggage claim area. They have actual heat body scans and luggage scans!
• It was INCREDIBLE! Fans of the original was definitely be pleased! We Pod Raced, was talked to by Yoda thru hologram.
• It was also interactive on a very nice scale, choosing someone in the vehicle, as a “princess” you need to help protect.
• My first run we didn’t encounter the new model of Rex at all, it was C3PO from the start.
• Patrick Worberg is definitely the heat scanning robot.
• The 3D technology is absolutely amazing, it’s flawless. The glasses are quite pretty too, and fit well!
• The second time was even more amazing! I have a loss for words, Each experience is so awesome!
• In the queue they had a lineup of all different types of R2-D2s. Very neat how they mixed things up a bit.

@taradise:
• 2nd queue area now has a baggage scanner. The bot is like the TSA. Pretty funny.
• Then you pass a “body scanner”. Bot just implied I wasn’t actually human but a shapeshifter.
• Ok, new ride is pretty great. We went to Hoth then Naboo on my tour. JarJar made an appearance.
• Guest interaction part: Imperial bot scans starspeeder, stops on a guest, takes their pic & declares them a wanted rebel spy.
• Commerical for Cloud City “see the Fantasy in the Sky fireworks spectacular!” Love old Disney references!
• 2nd tour: Tatooine pod racing then Naboo again. Vadar led the guest interaction this time which I liked way better than an imperial bot.

@StarTours2Live:
• Also, on Hoth the StarSpeeder wraps the AT-AT’s legs to take it down.
• Hearing great things. No one reporting any motion sickness issues.
• Just talked to someone who got a bit motion sick on the ride. Said it wasn’t too bad, but she is only riding once for now. (Did she ever get sick on the old one?) She did. She said this one wasn’t as bad.
• Rex (in the queue) has original lines including “Welcome Aboard” and “Haha, a little shortcut.”

@RyanCowles:
The new Star Tours ride is awesome! Star Wars geeks and non geeks will not be disappointed.

Our own “Show” host Mark Daniel also got to ride tonight. He said the ride was very cool. His ride went like this:

“When the captain doesn’t show up, C-3PO has to take control of the Starspeeder 1000. First they went to the ice planet of Hoth where the Starspeeder helped rope up and bring down an AT-AT. Then they were chased by Boba Fett and flew through the under construction Death Star. Along the way, one guest riding was singled out as the one Darth Vader is looking for and Darth takes the Starspeeder captive. To end the ride, Yoda shows up and gives C-3PO directions to a rebel base.”

Just two weeks until opening, construction walls are coming down at Cheetah Hunt

Perfectly pent content material, regards for selective information. “He who establishes his argument by noise and command shows that his reason is weak.” by Michel de Montaigne.