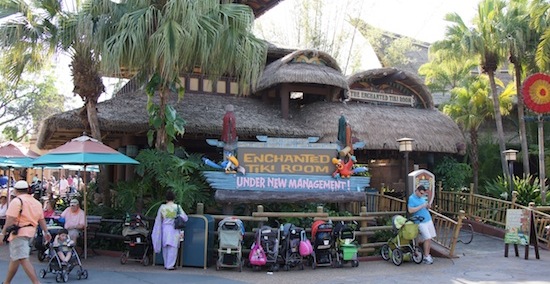 The “new managers” have officially moved out of the Tiki Room at the Magic Kingdom. The Disney Parks Blog has reported that changes have already begun to reshape the attraction into a version reminiscent of the original show.

The ride closed earlier this year when a fire broke out in the attic. It’s been closed since then with reopening dates being pushed back a couple of times.

The Walt Disney World attraction, originally called Tropical Serenade, has been entertaining guests since the theme park’s opening day on Oct. 1, 1971. Its winged hosts, Jose, Fritz, Pierre and Michael, led 200 other birds, tikis and flowers in an entertaining musical Polynesian revue. Tropical Serenade was reshaped into The Enchanted Tiki Room (Under New Management) in 1998, with the addition of Iago (from “Aladdin”) and Zazu (from “The Lion King”).

The “Enchanted Tiki Room” will reopen in its new/old form later this summer.

HOOOOO-RAY! I thought this would never happen, but I’m so glad they’re bringing back “The Original” (or closer to it!)

Awesome! This is the greatest news!

Glad the “Under New Management” has gone they did spoil the Tiki Room.