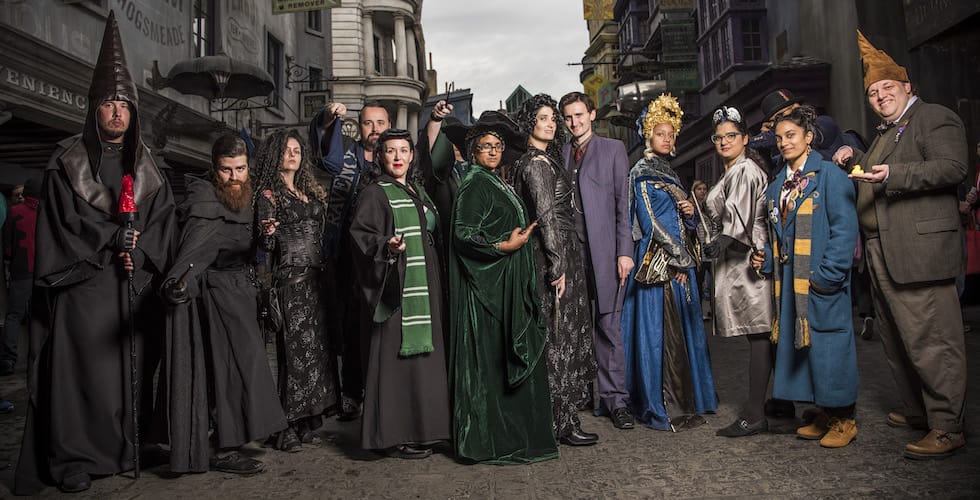 A Celebration of Harry Potter arrives this weekend at Universal Orlando Resort.

“A Celebration of Harry Potter” is back this weekend at Universal Orlando Resort, and will feature a packed lineup of interactive and exciting experiences that will let fans celebrate their love of stories in J.K. Rowling’s Wizarding World.

The experiences added to the full lineup include a performance of highlights from the Harry Potter Film Concert series at the Welcome Event, an in-park scavenger hunt, a showcase of costumes and even more panels and activities in the Harry Potter Expo.

Check out full details of the newly added experiences, as well as those previously announced below:

During A Celebration of Harry Potter, fans will get the chance to see some of their favorite actors and actresses from the Potter films. This year’s talent includes:

A Celebration of Harry Potter Panels (Islands of Adventure)

Guests can enjoy even more new panels with Harry Potter creative and film talent. Admission into these panels will be given out on a first-come, first-serve basis.

Experience Hogwarts in a whole new way with the upcoming mobile game, Harry Potter: Hogwarts Mystery. Learn how to live your own Hogwarts story, and join the creators of the game for an exclusive sneak peek at the game’s story, visuals, and gameplay.

Watch as CineConcerts founder and conductor Justin Freer and co-founder/producer Brady Beaubien as they discuss the magic behind the score of Harry Potter. They will dissect the music within a scene, and talk about what it takes to create complete scores performed live to the film with a full orchestra. You’ll also learn the complexity of those specific Potter melodies we all know and love, and how each score defines its film within the Harry Potter series.

Learn how to duel in this fan-favorite demonstration with the world’s only Wand Combat Coordinator, Paul Harris. A kid’s panel will also be offered for those guests under the age of 12.

A Universal Orlando choreographer, who works with Beauxbatons and Durmstrang students who perform in The Wizarding World of Harry Potter, will explain the movements and techniques that go into their dance routines. There will also be a section reserved for kids to join the rest of the audience in this fun activity.

Listen and watch as Miraphora Mina and Eduardo Lima, the founders of graphic design studio MinaLima, share insights into their part as graphic designers for film. They’ll talk about typical challenges and tasks, and go over their Weasleys’ Wizard Wheezes set to explain their process from script to screen. Images of their work will be shown throughout the panel. Questions from the audience will also be welcomed.

Join the Oscar and BAFTA award-winning Special Effects Supervisor, John Richardson, as he shares stories from the set of all eight Potter films. Learn how broomsticks were made to fly, candles made to float, and how things like fire-breathing dragons, wand explosions and more were created on set.

Throughout the event weekend, you will be tasked to search for the answers to a series of clues hidden in both magical and Muggle locations throughout The Wizarding World of Harry Potter – Hogsmeade and Diagon Alley.

At the Opening Night Event on Friday, Jan. 26, the Orlando Philharmonic Orchestra will perform iconic musical moments from the first four Harry Potter films live-to-picture alongside the scenes.

Fans can show off their best Harry Potter costumes onstage during the Costume Showcase. Each contestant selected will be judged based on the craftsmanship and quality of their costume, and will get the chance to win magical prizes.

Guests of every Hogwarts house will be able to share their pride with an all-new projection show on Hogwarts Castle. The show doesn’t officially start its run until Jan. 31, but guests to A Celebration of Harry Potter will get to see a sneak preview of the new show this weekend.

Show off how well you know the Wizarding World during this audience-participation game that invites fans of all ages to answer film-specific questions.

See talented chalk artists draw your favorite characters and scenes from the Harry Potter films, as well as “Fantastic Beasts and Where to Find Them.” Guests can even contribute to the art with the fan chalk art gallery that will be on display throughout the entire event.

Watch some of the Harry Potter films and share memorable moments from the franchise with friends, family, and other guests to the event.

At the Harry Potter Expo, guests can dive deeper into the Wizarding World of Harry Potter with all-new and returning fan-favorite displays and booths:

Jam City will be at the Expo to present Harry Potter: Hogwarts Mystery, a new mobile game launching under the new Warner Bros. Interactive Entertainment label, Portkey Games. This label is dedicated to creating gaming experiences inspired by J.K. Rowling’s Wizarding World. Fans are invited to be among the first to experience the magic of this mobile game with a gallery wall, giveaways and hands-on gameplay with the developers.

Fans can learn about the global phenomenon that lets them experience the magic of the Harry Potter films accompanied with a live orchestra. Guests can take selfie at the Harry Potter Film Concert Series photo booth and try their luck with giveaways.

See the Wizarding World in a new way with the Fantastic Beasts and Where to Find Them Virtual Reality Experience. Fans can step into Newt Scamander’s case and explore his world in this cinematic VR experience. Players can meet and interact with 6 beasts, cast spells, and immerse themselves in the magic in an all-new way. This VR experience will soon follow to major VR platforms.

Returning for their fifth year, MinaLima will bring their London design house to Orlando, showcasing their graphic designs of Weasleys’ Wizard Wheezes.

Pottermore will be bringing the latest news and announcements from the digital core of J.K. Rowling’s Wizarding World, along with a couple exciting reveals of their own. This year, fans can participate in Harry Potter – #AudibleRecall, now with house-specific rounds and updated questions each day during the event.

Scholastic will be at the Expo to celebrate 20 years of Harry Potter magic and fun with the books that started the phenomenon. Fans are invited to share what Harry Potter means to them by writing a message on the Muggle Wall. Guests can also step into a life-sized re-creation of the cover of the illustrated version of “Harry Potter and the Sorcerer’s Stone.”

See Wizarding costumes from Harry Potter: The Exhibition, take a walk on the runway for a one-of-a-kind photo keepsake, enter a drawing for a chance to win a trip for two to the next host city during the Exhibition’s tour, and even learn your true Hogwarts house in the Sorting Hat Experience.

The Studio Tour returns to A Celebration of Harry Potter to give fans the chance to see some of the practical effects behind the magic of the Harry Potter films.

The theatrical phenomenon is coming to the Harry Potter Expo to give visitors an exclusive, never-before-seen look at costumes, imagery and designs from the production.

Admission to A Celebration of Harry Potter is included with regular park admission to Universal Orlando Resort, or with an annual or seasonal pass. Certain activities and events are first-come, first-served. Exclusive event vacation packages are available, which include special benefits and reserved seating for panels and demonstrations.

Do you know what time the actors panel will happen?

Bring a taste of the Wizarding World...

Watch out for wizards – Harry Potter...