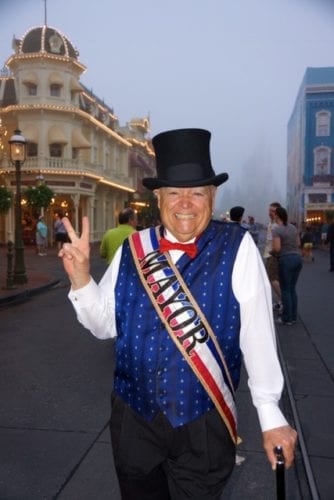 Christopher George Weaver, beloved by Magic Kingdom guests as the ‘Mayor of Main Street USA,’ passed away on Christmas Eve.

Walt Disney World’s Magic Kingdom has lost one of its favorite magic-makers, as Christopher George Weaver, known to millions of guests as “the Mayor of Main Street USA,” passed away on Christmas Eve at age 84.

Longtime Walt Disney World cast member Christopher George Weaver, known to his friends as Chris or “Carl” (after the character from Pixar’s Up), was born in Miami, Fla. in 1933. His performing career spanned 60 years, 26 of which were with Disney. 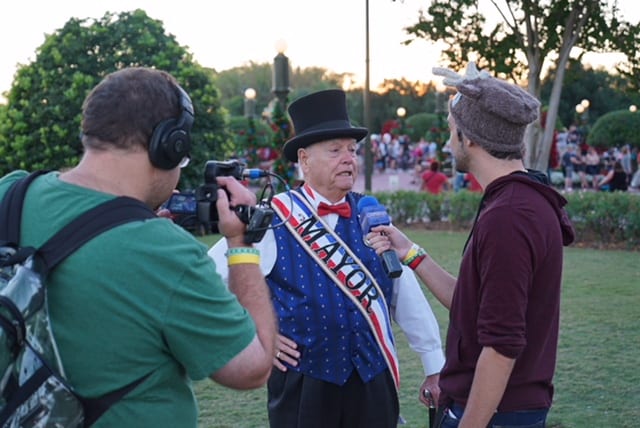 Christopher George Weaver being interview by Attractions Magazine in 2014.

According to Weaver’s close friend and colleague Mark Miller, who performed alongside him as Fire Chief of Main Street USA, Christopher began his theater career working cabarets in South Florida, and also performed at the Pocono Mountain resort hotels in Pennsylvania. Weaver served in the Army during the Korean War, and briefly lived in New York City.

In addition to working for Disney, Weaver was also a cruise director and entertainer on Norwegian Cruise Lines for many years. During the course of his career, he met icons like Frank Sinatra, Jackie Gleason and Jerry Lewis, and became friends with comedian Phyllis Diller. 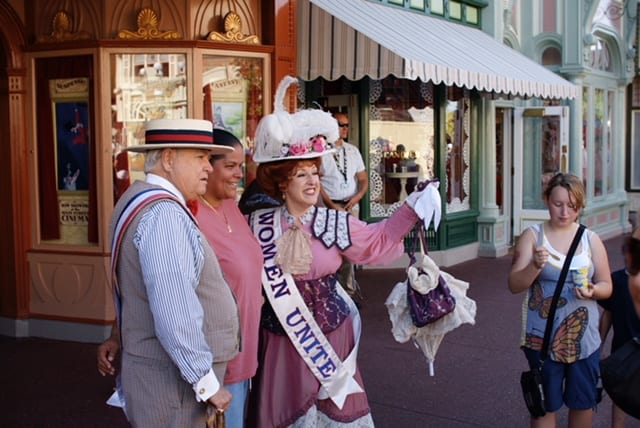 Weaver began his career at Walt Disney World with the opening of the Indiana Jones Epic Stunt Spectacular at Disney’s Hollywood Studios (originally Disney-MGM Studios) where he played the show’s Director. He later became the the Town Crier for the Fife and Drum Band at Epcot’s American Adventure, before finally becoming the first and only “Honorable Mayor of Main Street USA” at the Magic Kingdom.

As Mayor, Weaver presided over the daily welcome show at the train station (before it was discontinued) and spent his mornings greeting guests near the front of the park, always sharing a joke, song or one of his customized business cards. Weaver’s mock slogans in his never-ending mayoral campaign were “The Best Mayor money can buy!” and “Pull the Leaver, Vote for Weaver!” Over the years, he was recognized for his magic-making efforts by countless visitors, and even the Disney Parks Blog honored his contributions. 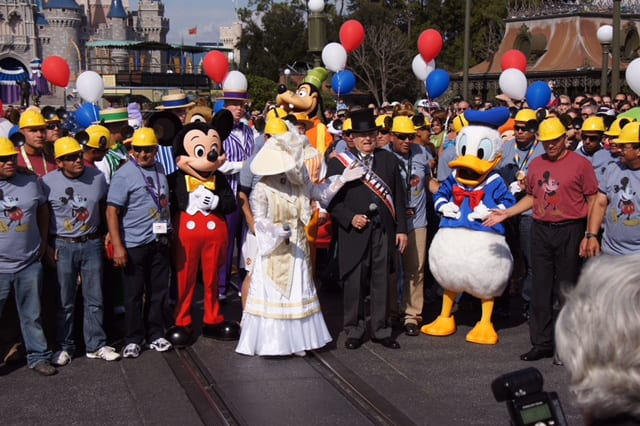 Miller recalled, “He was very proud of his career, and his time at Disney. He was a Legacy Award winner and we are all smiling for having known him. In fact, his favorite song to sing on Main Street was ‘When You’re Smiling , the Whole World Smiles with You’ … He always said he wanted to be the Mayor as long as he could, and he did just that.”

“As Mayor Weaver he brought Disney’s Main Street to life for millions, one handshake and hug at a time,” remembered actor Holland Hayes, who worked with Weaver for many years as Main Street USA reporter and pin expert Scoop Sanderson. “He was more than the Mayor to those of us who lived in the tiny greenroom with him at work; he was our Main Street family father during the best years of our lives, and we miss him so much.”

Weaver is survived by two daughters, and many grandchildren and great-grandchildren. No memorial arrangements have been made public. For more memories of the Mayor of Main Street USA, watch our interview with him from 2014:

Close-up on the movies behind Main Street, U.S.A....

Build your own Main Street, U.S.A. with Disney...

I remember him fondly while on my internship in 2011. Eventhough I was an Entertainment technician, I wanted to have that same smile and magic that he had. Days off I would spend watching him do his magic and he would always take time to talk with me when he saw me. When my internship was over I saw him before I left and thanked him for being so kind to me. 5 years later I saw him at Christmas time, and he remembered me. He will be missed greatly

Thank you for such kind words about my grandfather ????

Hi Jacyln, My family has a very special connection with your grandfather and I’ve written about it on my blog. I’d love to send you the photos electronically as well so that you can have them and share with other family members. http://mrsfarrellhob.wixsite.com/amomwithmouseears/single-post/2018/01/03/Remembering-Mayor-Weaver

I would love that!!! my email is [email protected]

I never heard of this guy and I never knew there was a mayor of Main Street, but I know that hew as loved by so many people. He must have been a really nice guy. He will be remembered.

It is a very sad day on Main Street USA

On our 2nd trip to WDW, we had come out of Cinderella’s Castle for an early breakfast. My Mom told the Fairy Godmother how it was her granddaughters birthday and she told my mom to take her back to city hall to get her Bday button. Well, as we proceeded down Main St., my mom saw the Mayor and told him it was my daughters 8th Bday. He took Kristian by the hand and proceeded back towards city hall, the whole while yelling its Kritians birthday, Kristian is 8 today and complete strangers in response from the early morning rush were relying Happy Birthday to her. Talk about a magic memory! And that was 17 yrs ago, but still fresh in all our memories to this day.
He also asked where we were from, we told him and he told us thats where his favorite restaurant is, we said really and he said yes, McDonalds! We all got a good laugh out of that. Such a sweet man. We had a few other chances through the years to stop and converse with him. He always remained the same, a smile, a friendly, warm handshake, and a jovial word. We could tell, he loved his job, and he loved people.
We will miss you Mayor Weaver

He was a kind and gentle man,always quick with a smile. He wll be missed.

“I have fought the good fight, I have finished the course, I have kept the faith.”
2 Timothy 4:7

Our Main Street will continue to mesmerize guests as it has done since day-one. However, we, who have been an Annual Pass Holder for 10 years, will know that it just won’t be the same.

My family and I met Mr. Weaver on our first trip to WDW in 2009. He pulled us aside during a parade and spent time talking with us and giving us tips on how best to enjoy our first trip. We spent time with him again in 2012 and then again as Family of the day on September 11th, 2015 where he spent a good amount of time making us feel very special. I miss him.