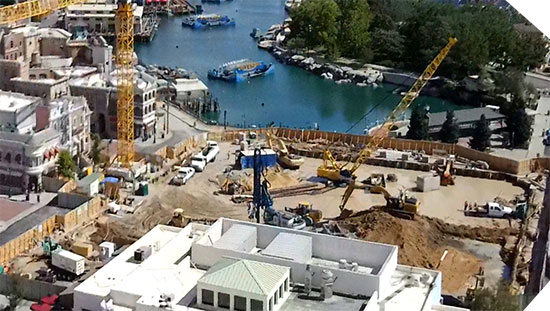 Work continues at a rapid pace at the former site of Soundstage 44. Rumor is that this will be a Transformers attraction, but no announcement has been made.

This is an eyeglasses camera view from Rip Ride Rockit. Note that there is a perimeter construction wall, and another perimeter wall just inside. From this vantage it looks like half of the site has been evenly leveled with sand, up to that inner perimeter wall. 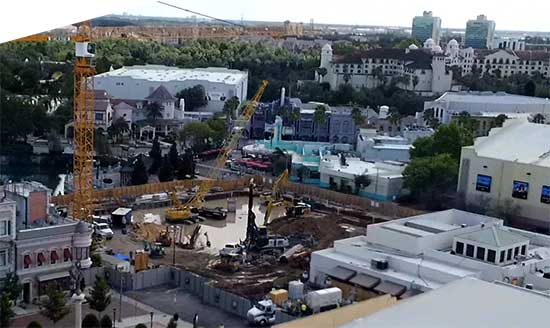 But this eyeglasses camera view reveals a reflection! Half the site is filled with water, probably rain water. An excavation is in progress. 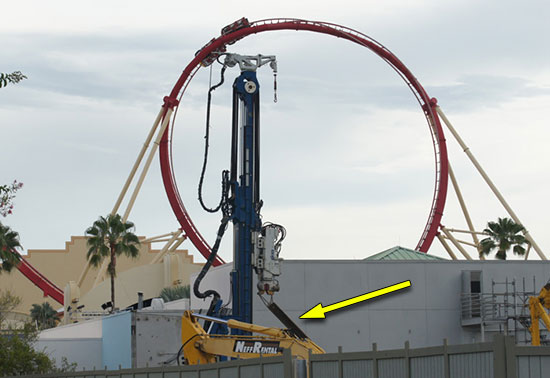 With the perimeter walls in place, an excavation began, removing dirt up to the retaining wall. The retaining will give the attraction site a level lower than street level. 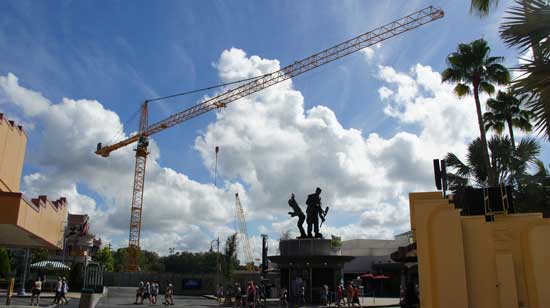 The park skyline has changed too. This tall crane was raised in what used to be an open street. 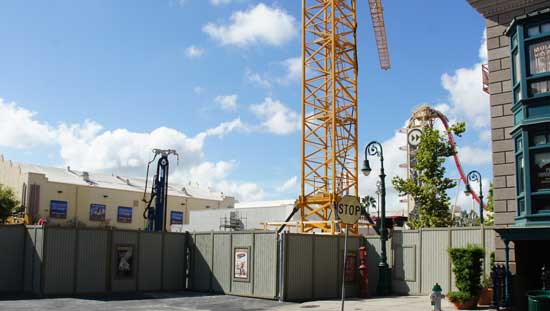 The street is now temporarily closed at the base of the crane. 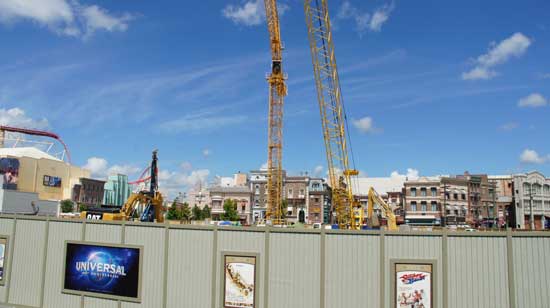 Looking across to the New York City section from the exit of Shrek 4D. 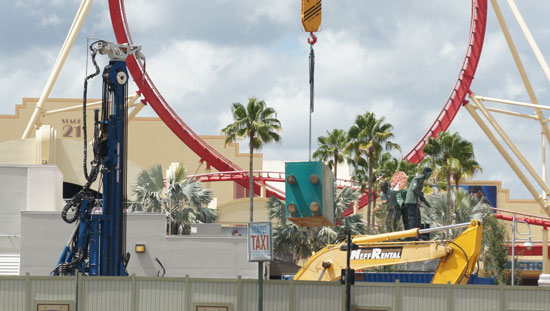 No structural steel has been raised yet. So far the crane seems to be positioning only site support items. 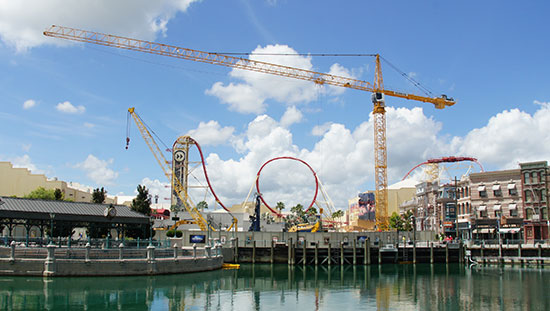 However, this project has a rapid pace. A new building frame will probably be seen here soon. 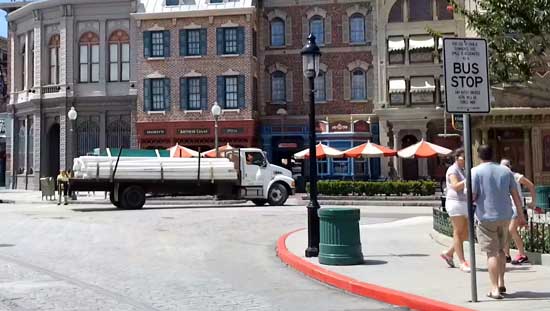 Construction-related trucks continue to travel through the park during operating hours. The project has dedicated team members who keep guests safely well back from the trucks. 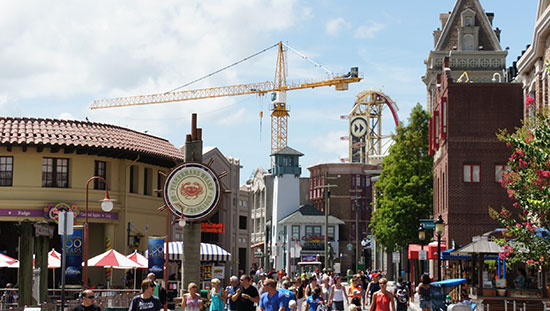 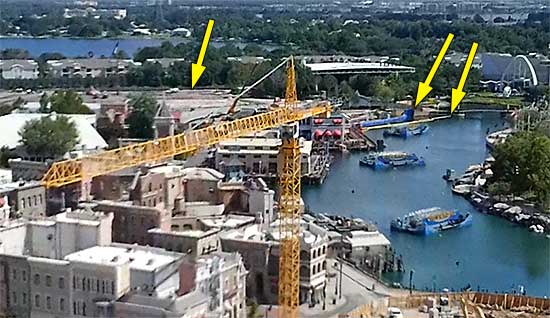 Our journey across the park has reached the former site of Amity Island and the Jaws ride. This mystery project is rumored to be a section themed to Harry Potter in London. Universal has announced a Wizarding World extension but no details.

The left yellow arrow points to the still mostly-clear former site of Jaws. The two right arrows point to a new temporary dam features in the Lagoon.

This is an eyeglass camera view from Rip Ride Rockit. Note also the new stages in the water for Universal’s Cinematic Spectacular. We’ve never been able to get a photo of the Lagoon from this angle before, because loose items like hand-held cameras are not permitted on the roller coaster. The eyeglass camera allows us to follow park rules, and share these views with you. 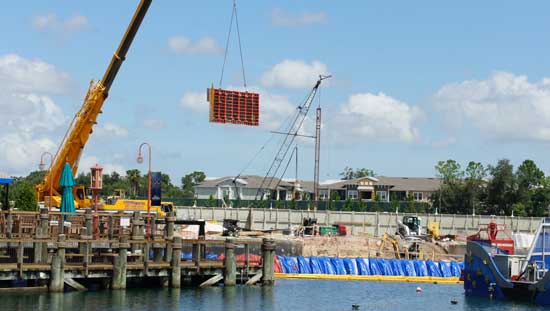 Work continues at a steady pace at this mystery project. Note the two dam features at the water edge. The blue wall keeps water back from the construction site. The yellow berm catches debris that might float away from the site.

A crane here is lifting a concrete form away from the dry area behind the dam. 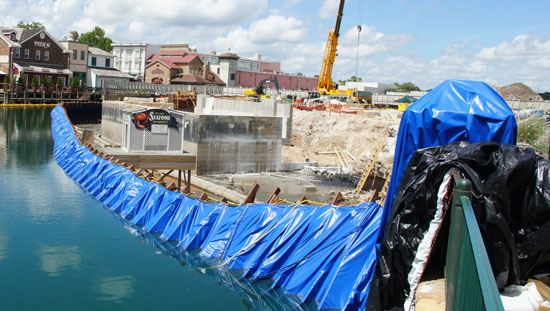 The temporary dam as seen from the north end. Note that a projector for Universal’s Cinematic Spectacular is temporarily high and dry at the dam edge.

The dry work site as seen from the south. The zig-zag of the old Amity Island waterfront is the darker concrete wall at right. Steel reinforcing rods for a new wall are just behind it. 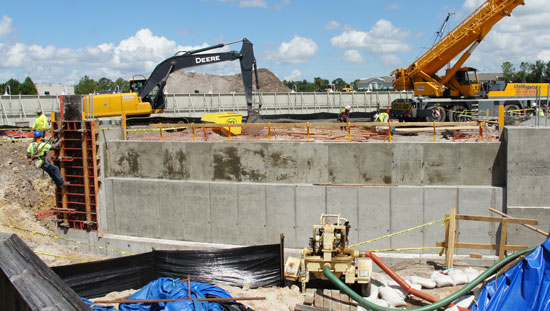 The newest portion of what will probably be the new water edge. This area is where the concrete form seen two photos back was raised from. 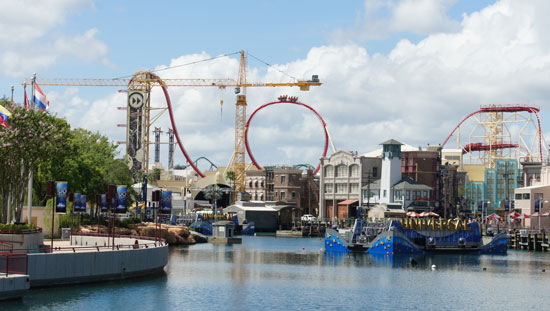 Stay tuned as we follow the progress of these two mystery projects, at opposite ends of the Lagoon!

I happened to get a video of one of those retaining walls getting driven into the ground. Make sure your computer speakers aren’t turned up too loud! https://www.youtube.com/watch?v=dBnMqxD-D4E

The two mystery project’s are the transformers and harry potter expanshion i can tell iam sure of it.

The only problem with the Transformers ride theory is that having ridden the ride in Singapore the other day,it is exactly the same as Spiderman except for the animation. The track,vehicles,twist and turns all the same, exactly the same. So if it was Transformers it would need to be new type of ride?
But you never know

I am a supplier for one of the projects, and it is a Transformer project. This ride is being built in Singapore so it is no surprise that it is the same as the Spider Man ride.