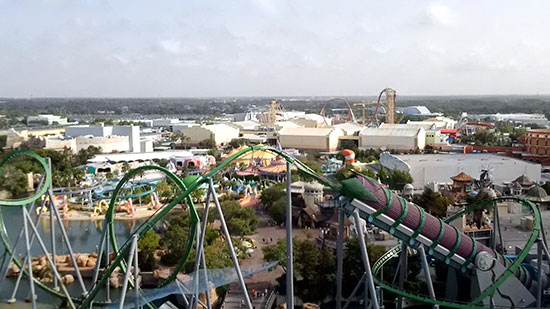 Join us as we travel full circle around each of the four views of Dr. Doom’s Fear Fall, as seen from a pair of new high-tech camera eyeglasses. Loose articles like handheld cameras are not permitted on this ride. So we’ve never been able to share these splendid views until now.

The soundstages and skyline of Universal Studios are at center of the photo, just above the twisting crest of the Incredible Hulk roller coaster. The most recognizable feature is the red track of the loop and tower of the Hollywood Rip Ride Rockit roller coaster. The construction crane at the Soundstage 44 project is also visible past Rip Ride’s first drop. 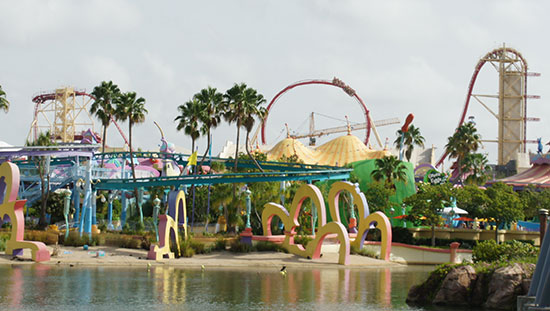 For comparison, this is a lakeside view of Seuss Landing, Rip Ride Rockit, and the construction crane. 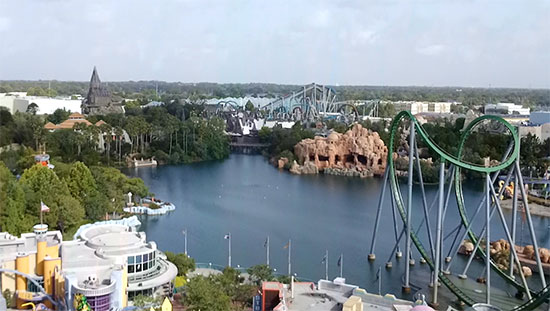 In the upper left is the spire of Hogwarts castle in the Wizarding World of Harry Potter. Clockwise from Hogwarts are Dragon Challenge roller coaster, the rocky exterior of the Mythos restaurant, the Hulk, and some of the buildings of Marvel Super Hero Island. Past the trees, near the base of Hogwarts, is one of the Jurassic Park restaurants. 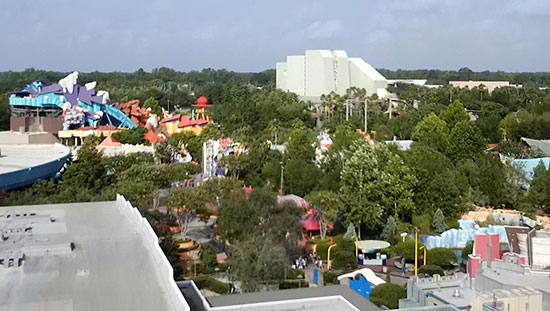 On the horizon here are Dudley Do Right’s Ripsaw Falls, and the tall white Jurassic Park show building.

You can see the future site of what will be the largest hotel at Universal Orlando, the Cabana Bay Beach Resort. This resort project was just announced, and it will have 1,800 rooms.

One of the three other hotels at Universal Orlando, the Royal Pacific Hotel. The tall tower on the horizon is the Four Points by Sheraton Studio City Hotel, on International Drive. 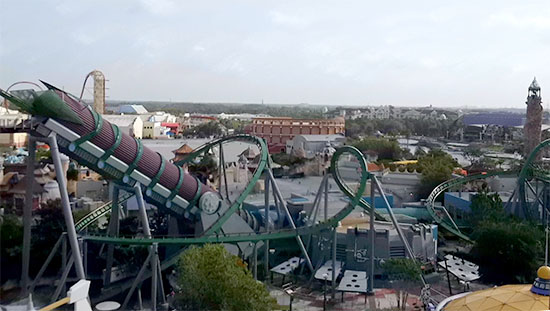 Just past the Hulk at center frame is the Hard Rock Live theater. On the horizon are the tiled-roof buildings of the Hard Rock Hotel. The Islands of Adventure lighthouse is at far right. 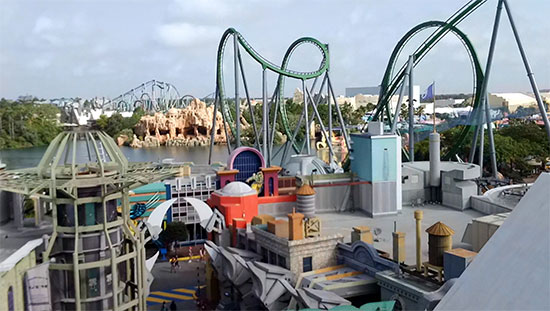 This tour is coming to a close, as we descend to the ground. 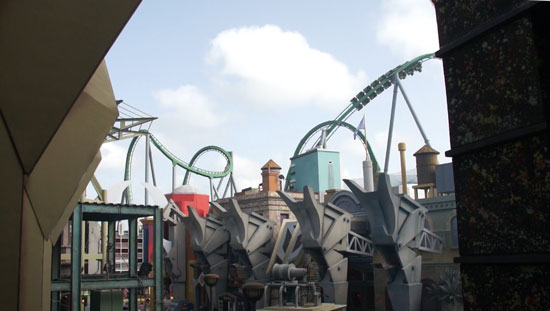 We also have video to share. This is point-of-view video, as seen from of all fours launches.

Nice! I did get away with a camera hanging around my neck once… not great video, but nice concept of “air time”.

Once while riding and facing out to the back of the ride (non-park views), we saw the Green Goblin character walking behind the ride to come out to park/guest side. We started yelling “Green Goblin!” and he looked up and waved!

My dream of a Universal Monsters-themed Halloween...