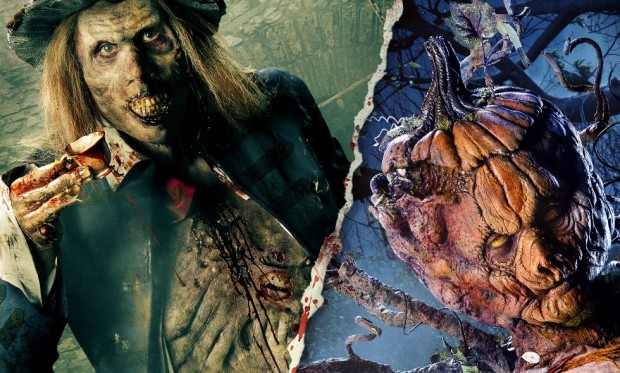 Some of the most twisted and gruesome character creations from Syfy’s “Face Off” will be live and “In the Flesh” during Halloween Horror Nights 24 at Universal Orlando.

Beginning Sept. 19, an all new street experience will feature 10 different character creations inspired by the acclaimed Syfy series, including a look designed by season 5 “Face Off” winner and Universal Orlando make-up artist, Laura Tyler. The horrifying characters will inhabit five unique environments within the scare zone, from eerie scarecrows that go to great lengths to protect a farmland, to ghoulish brutes that haunt dilapidated castle ruins.

Universal Studios Hollywood’s all-new maze, “Face Off: In the Flesh,” will recreate the morbidly disturbing inventions masterminded by make-up special effects artists over the course of the show’s past six seasons. Twenty-two original “Face Off” designs – from human-insect hybrids to horror villains, ancient mummies and zombies – will cascade throughout the dark corridors of the terrifying new maze bringing to life multiple incarnations of these select characters and adding to the cast of characters designed to scare the life out of every guest. “Face Off: In the Flesh” will also feature new sounds from acclaimed electro house artist “Figure,” who returns to Universal Studios Hollywood’s “Halloween Horror Nights” with a haunting mix of electronica-inspired dance music.

Season 7 of “Face Off” premieres on Syfy on July 22, 2014. The series will feature Universal Studios Hollywood for an episode airing Sept. 9 in which the artists must create an original horror villain inspired by evocative titles and vivid graphics from a movie poster. The winning makeup from this challenge will be featured at the 2014 Halloween Horror Nights.

“We’re excited that some of Face Off’s most memorable and visually stunning creatures ever will be brought back to life for Universal Studios’ ‘Halloween Horror Nights,’” said Bill McGoldrick, EVP, Original Content, Syfy Original Programming. “Over the years, the talented artists of Face Off have dreamed up some amazing creatures that we know will make terrifying additions to the ‘Halloween Horror Nights’ experience.”

“The gruesome creatures imagined on Face Off are the perfect fit for the streets of Universal Orlando’s Halloween Horror Nights,” said Michael Aiello, director of entertainment – creative development, Universal Orlando Resort. “Our goal is to bring to life the macabre artistry displayed in the characters seen week after week. We are also very excited to be featured in a season 7 episode of Face Off, and to include that episode’s winning makeup in the maze. For our guests, I know it will be a uniquely terrifying opportunity to come face to face with these creations for the very first time now “In the Flesh.”

Celebrate Holidays in Space at the Kennedy...