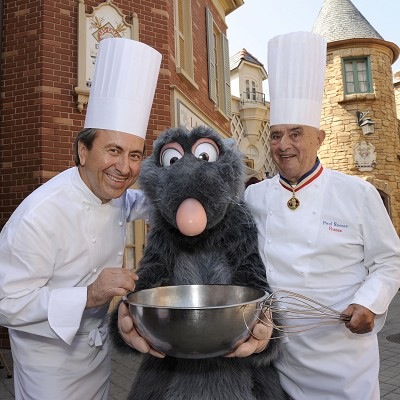 Culinary greats will put their spatulas to the test in an elaborate cook off tomorrow and Saturday during the opening weekend of the 13th Epcot International Food & Wine Festival.

Eight two-person teams will turn up the heat in the kitchen in the hope their culinary creations land them a top spot representing Team USA at the Bocuse d’Or World Cuisine Contest, commonly called the “Culinary Olympics” in Lyon, France, in January 2009.

Epcot guests can attend the competition and observe the culinary wizardry as the teams serve up elaborate fish and beef dishes to be judged by a top-chef panel including Thomas Keller; Daniel Boulud; Charlie Trotter; Jean-Georges Vongerichten; Georges Perrier and Laurent Tourondel. Dishes will be judged on excellence in taste, presentation, technical skill and overall kitchen organization. TV personality Al Roker will take the stage Saturday to emcee the excitement.

The competition culminates Sept. 27 with a Gala Dinner and Awards ceremony recognizing the first-second-and third-place teams. Tickets are still available for the star-studded event featuring gourmet cuisine, live musical entertainment, dancing, a silent auction and a chance to meet and mingle with some of the world’s top chefs, including contest founder Paul Bocuse and the deans of the French Culinary Institute, Alain Sailhac and Andre Soltner. The highlight of the evening will be a dom perignon toast and the announcement of the Bocuse d’Or USA winning team.

The eight finalists competing for a spot on the U.S. Team include:

Reservations for the Gala Dinner and Awards event are $325 per person, exclusive of park tickets and tax. Proceeds benefit Bocuse d’Or USA (a non-profit organization sponsoring the competitors’ training, travel and culinary education.) Call 407-WDW-FEST (407-939-3378) or visit www.disneyworld.com/food for reservations and more information.

Pleasure Island not the only Disney entertainment closing this weekend

Really nice photo. I’d like use it for my site. I hope, you have nothing against 🙂

Stars gone from the top of Spaceship...