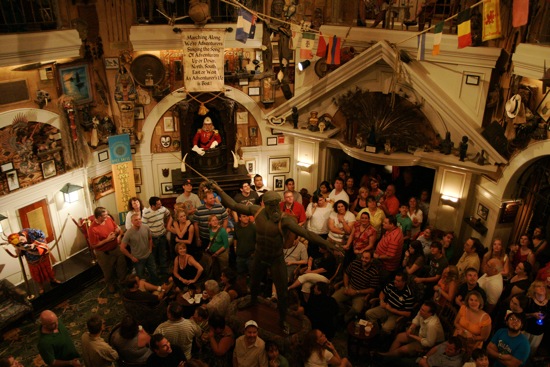 It’s coming down to the last days for the Adventurer’s Club, the beloved Pleasure Island landmark full of quirky characters, interactive shows that often veer off in unexpected ways, and intensely loyal fans that know every line to every song performed. In fact, many of these “regulars” have visited the Club well over 100 times since it first opened its doors in 1989.

Liesl Schindler first dropped by the Club 15 years ago on a trip from California and then moved to the Orlando area two years ago. “We used to come in at least twice a year to see Disney and the Adventurer’s Club. Now that it’s about to close, I’ve been coming over almost every other night for the past month. It feels like it’s our club, you know?”

When Disney made the announcement on June 27 that it was closing all six of the Pleasure Island clubs to make room for more dining and sales options, fans started petitions, letter-writing campaigns, blogs, radio shows, and even a map-sending protest. But it looks like the closing will go forward, as the Club shuts its doors to the public at the end of this Saturday’s performances.

Starting tonight the Club will open two hours earlier. If you plan on dropping by on Saturday, expect crowds. Many fans (with several wearing costumes in honor of their favorite characters) are planning on lining up as early as they’re allowed, to ensure their place inside for the final curtain call. In addition, many of the Club’s “Super Fans” from out of state bought or exchanged plane tickets just to make sure they could be there on the Club’s last night.

Ken H. from New Orleans booked a trip to Orlando a year ago that ended up putting him at the Club this past weekend. However, as soon as June’s announcement was made, he immediately booked a SECOND trip to fly back in this weekend. “I wouldn’t miss the finale for the world.”

Maureen Reider from Jaffrey, N.H. will be celebrating a bittersweet birthday this weekend at the Club for one last Hoopla. (Hoopla!) “I think what keeps people coming back, myself included, is the laughter and the emotional connection. The characters are corny and wonderfully brilliant. Guests become immersed within their surroundings and become part of the entertainment. It’s hard to pinpoint what the magic formula is, whether it’s the wonderful details that Disney Imagineers have put into the decor and all the props, or the connection that the cast members make with guests.” She added, “The Adventurer’s Club is like a dear friend, no matter how long it has been since your last visit, you are welcomed as if you had never left.”

For a full story on the Club, and a picture-packed send-off, be sure to pick up the upcoming Oct./Nov. issue of Orlando Attractions Magazine.

This blog entry was written by Orlando Attractions Magazine and freelance travel writer Deborah Brauser. Visit her online at www.orlandotravelwriter.com