After weeks of dropping hints, Universal Orlando finally revealed which attraction will replace Jimmy Neutron’s Nicktoon Blast ride. Gru and his Minions from Despicable Me will be invading Universal Studios in 3D next year. Plus The Amazing Adventures of Spider-Man ride is getting an reanimated HD upgrade and more. 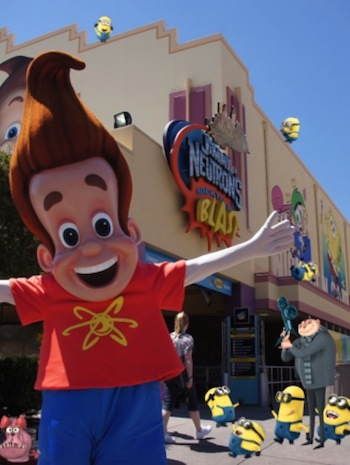 On March 15, Universal announced that Jimmy Neutron’s Nicktoon Blast would be closing for good on Aug. 18 to make way for an “all-new experience based on an amazing concept”. Then on April 21 they started releasing hints about what the new attraction would be. Guesses included everything from Despicable Me and King Kong to Avatar and South Park. Some clues could lead to more than one guess, but in the end, all clues pointed to Despicable Me.

Universal also announced that The Amazing Adventures of Spider-Man ride will be completely reanimated in digital high definition. Both Despicable Me and Spider-Man will utilize brand-new Infitec 3-D projection systems designed to make the experience sharper, clearer and more “real” than ever before.

“Despicable Me” will become the first-ever Universal animated film to be transformed into a theme park experience. The Universal Creative team is working closely with producer Chris Meledandri, the founder of Illumination Entertainment, to create all-new animation for an all-new “Despicable Me” adventure.

Gru, one of the world’s greatest super-villains will transform guests into an army of mischievous, scene-stealing minions, then he’ll train them. And that kicks off the ride experience as guests explore Gru’s lair and descend into his secret lab where they’ll be swept into a minion-inspired, interactive dance party.

“The Despicable Me attraction is the latest example of how we tap into pop culture’s most compelling stories and turn them into extraordinary theme park entertainment,” said Mark Woodbury, president of Universal Creative. “This is a perfect fit for Universal Orlando, and we can’t wait to bring this one-of-a-kind experience to life.” 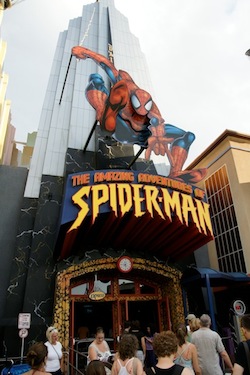 “As we write, design and animate our films at Illumination, it is our singular goal to bring to life endearing and, hopefully, enduring characters,” said Chris Meledandri. “With the creation of next year’s Despicable Me attraction at Universal Orlando, audiences will be able to immerse themselves in Gru’s world for many years to come.”

The new digital animation being added to The Amazing Adventures of Spider-Man, combined with the new Infitec system and new set enhancements, is said to transform Spider-Man into a new experience. Universal is adding entirely new details to the film – and leaving it up to guests to find them.

“Guests will not believe their eyes when they experience the new Amazing Adventures of Spider-Man,” said Thierry Coup, senior vice president of the Universal Creative Studio. “We are talking about a larger-than-life environment and the HD animation will make it even more remarkable than it has been. It will seem brand-new.”

Here’s full video of the announcement:

Here’s a flash mob put on by Universal just outside the gate of universal Studios to celebrate the announcement:

Any word on when Spiderman will be closing for the refurbishment? I’m going in September – I wouldn’t expect the updated version to be ready by then but I’d like to still be able to ride the old version at least.

Amazing! they’re making the greatest ride ever even better!

Knew DM would replace JM. However, will this be a 3D show or a 3D simulator? If its a show, might hit or miss.

I’m Going In July. so when will The Web Head Close for Refurbishment?
But DM Will be ok, I was hoping AVATAR

Spider Man sure needs a complete refurb! Family was there back in March and Spidey was in poor show format. Sound was way out of synch, 3d wasn’t working well – very bad show. I felt bad because I had talked it up so much to family that hadn’t been on it before. Oh well…

Why go through all the trubble to redo the sidy move and not put a new spidy advanture on the screen?
It´s a waist of money. When I rode it last December it looked awesome.

It will be a waist of time. Remember Dudley?

You are right Patrick it does need little Refurb but at least I hope they put more villains in the ride like the new SWISS MISS form the troubled Broadway Musical Spider-Man Turn Off The Dark.

hope they make spider-man villans (Doc, and Green goblin) look like they did in the movie

sean, did you see he made a reference to you in the article about south park?

Anita, it is a simulator that moves around w/ the movie

GOOD! I WANNA BE THE FIRST PERSON TO RIDE THIS!

See Sean. I was right. except the part of being shrunk. this time you are shrunk as a minion. And just to be sure, i knew it was in 3D from the beginning because the film was released in 3D last year. And I didn’t say anything about T2-3D.

My mistake. You are TURNED into a minion. Sorry.

Joel I Did Not Read That. But The web Head needs an upgrade. They Sould add More Villains like the ones from that broadway musical.

Waist of money really?
No it won’t!
The Ride has been there for 11 years now!

Gab you did during the hint dropping

The Jimmy Neutron ride will be closing. I can’t wait for the Despicable me ride in 3d!

I miss Universal when it wasn’t all about kids. Sadly Carl Lemmle’s dream is turning to a nightmare. It’s also a waist of money to get rid of Jimmy. A smarter move would be to use the 3 locations that are currently empty in Universal. The wild west stage next to Jaws, the Murder She Wrote stage next to The Diner or the old abandon Hard Rock Cafe. They would make more Money by adding and not replacing

Ohhhh man I can’t wait for this. The movie was pretty sick. And really it’s about time Spiderman got an update. Can’t wait to go check it out!!! https://blog.orlandominivacations.com/

We are in 2012,So when is the Despicable me ride going to come out?

When is the Despicable me ride trailer going to come out?

So, the Despicable Me ride comes out as Despicable me: Minion mayhem. Right?

The Minions are my favorite! And I’ve always loved the Spiderman ride so I’m super excited about all of these changes – I haven’t gone to the park in awhile despite living in Orlando but that will have to change.

When is despicable me minion mayhem ride coming out? We’re almost in summer.