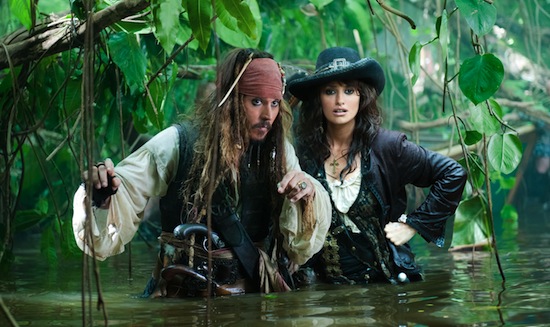 Fans of the first three movies in the Pirates of the Caribbean film series will be pleased to discover that Capt. Jack Sparrow is every bit the same character in the newest film, On Stranger Tides.

He improvises, he instigates, and when necessary, he intervenes to help his friends. His famous mannerisms are here – Johnny Depp has this character down cold – as are his ribbing quips (most of the theater laughed out loud at his retort that he was “never THAT drunk” to father a child with this particular woman).

For all the Jack Sparrow, though, this movie doesn’t feel quite like a regular installment of the Pirates film series. It’s missing stalwarts Will Turner (Orlando Bloom) and Elizabeth Swann (Keira Knightley), for one thing. They are simply not in the movie. In case you forgot (it’s been four years since the last picture), they are forever stranded in a lover’s pickle of seeing each other only once every 10 years.

Perhaps they were a key part of the chemistry. Or maybe it was the tricky balancing act of genre-bending that was the hallmark of the earlier movies. Ostensibly action-adventure, with equal parts questing, swordfighting, and monster-battling, the first three movies were also arguably romances. Or horror films. Or comedies. It was hard to say, exactly. 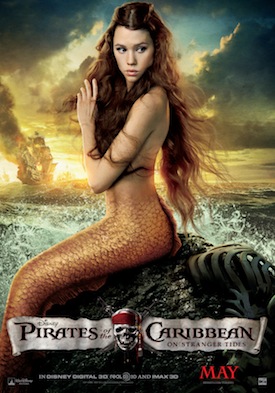 The newest movie, by contrast, sits squarely in the action-adventure camp. There is much less over-the-top cheese (the Kraken of past movies comes to mind). When new creatures arrive in the form of mermaids, they are depicted as menacing, dangerous denizens of the deep. It’s not done as a monster movie so much as an action movie. It was probably wise to steer away from the campiness of the recent films. Like the Batman franchise before it, Pirates was also veering toward schlock, and setting a new course toward action made sense.

But while On Stranger Tides avoids the overly complicated plot of At World’s End, it arguably slows down the pace too much. The middle was slow, and while it always held my attention, it simply didn’t “feel” like a Pirates of the Caribbean movie for long stretches. The plot revolves around Jack searching for the Fountain of Youth, and he crosses paths with Angelica, a former lover and possibly the daughter of famous pirate Blackbeard, superbly played by the often terrifying actor Ian McShane.

All Pirates movies have paid homage to the park attractions which preceded them, and On Stranger Tides is no exception. In an old shipwreck, watch for a skeleton sitting on a bed, examining a map with a magnifying glass. This will look familiar to those who know Disneyland, but not those who know only Walt Disney World, for the scene in question can only be found in the West Coast attraction.

At Disney, art imitates life imitating art, so of course the movies also creep back into the parks (where the mythos began). The character of Angelica has already begun making appearances at meet-and-greets in Adventureland, and her face now graces the nearby fast food restaurant. That eatery has changed its name from El Pirata y el Pericho to Tortuga Tavern in a nod to the movies, and some of the décor in an interior room has been changed to reflect Angelica’s crew manifest. Starting Friday, Capt. Blackbeard will temporarily replace Davy Jones in the mist projection scene at the start of the ride. The Pirate’s League at Magic Kingdom has also started offering Mermaid makeovers for a limited time.

On Stranger Tides opens nationwide this Friday, May 20, 2011.

Here’s a look at the the Disneyland premier for the movie, with interviews by Kermit the Frog:

American Idol Top 24 contestant was a...