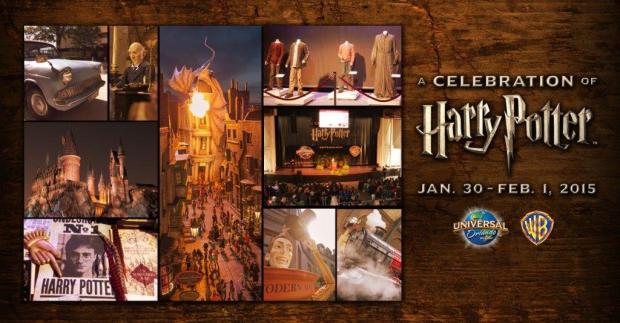 Get ready for a Potter takeover as “A Celebration of Harry Potter” returns to Universal Orlando early next year.

“A Celebration of Harry Potter” will take place from Jan. 30 through Feb. 1, 2015 at Universal Orlando. Fans will enjoy three days of experiences, including Q&A and autograph sessions with Harry Potter film talent, special discussions and demonstrations with creative talent, and access to the “A Celebration of Harry Potter” Expo – where fans can enjoy the Sorting Hat experience, pose for a photo in a recreation of the iconic Great Hall set and celebrate their Hogwarts house pride in an interactive Pottermore exhibit.

Guests can also experience Harry Potter’s world for themselves by visiting The Wizarding World of Harry Potter – Hogsmeade at Universal’s Islands of Adventure and the all-new The Wizarding World of Harry Potter – Diagon Alley at Universal Studios Florida. Vacation Package guests and those with a park-to-park ticket will also be able to board the iconic Hogwarts Express and enjoy a unique journey as they travel between King’s Cross Station and Hogsmeade Station.

Access to “A Celebration of Harry Potter” is included with regular theme park admission or with an annual pass, with admission to certain activities being granted on a first-come, first-served basis. While most of the activities for “A Celebration of Harry Potter” will be open to all Universal Orlando park guests, those who purchase the exclusive event vacation package will enjoy certain special benefits and reserved sections for the discussions and demonstrations.

Event details are below:

• Behind the Scenes: Harry Potter Film Talent Discussion
Enjoy a fascinating and interactive Q&A session featuring some of your favorite actors from the Harry Potter films. Discover what it was like to work on the most successful film franchise in history.

• Duelling Demonstration & Wand Combat Masterclass with Paul Harris
Pick up your wand and take part in a live duelling masterclass, hosted by Warner Bros. Studio Tour London, featuring the world’s only Wand Combat choreographer, Paul Harris. Paul choreographed the epic battle scenes in Harry Potter and the Order of the Phoenix and will be on hand to teach you the technique behind wielding a wand.

• Graphic Design for the Harry Potter Films with MinaLima
Miraphora Mina and Eduardo Lima, from the graphic design studio MinaLima, will share insights into their role as graphic prop designers for more than a decade on the Harry Potter movies. They will discuss and show some of the iconic props they created for the Harry Potter films, including the Marauder’s Map, the Daily Prophet and The Quibbler, amongst others. Still immersed in all things Harry Potter, they will also talk about their recent involvement in The Wizarding World of Harry Potter – Diagon Alley.

This year’s “A Celebration of Harry Potter” will also include kids’ discussions and interactive experiences such as a special duelling demonstration and wand combat masterclass with Paul Harris, an interactive ‘Dance Like a Beauxbatons and Battle Like a Durmstrang’ experience, as well as Harry Potter film trivia.

“A CELEBRATION OF HARRY POTTER” EXPO
The Expo will be held inside a Universal Orlando soundstage and will be open to guests throughout the weekend. The expo will include the following booths and exhibits that will give guests deeper insight into the global phenomenon that is Harry Potter:

• Harry Potter: The Exhibition Sorting Hat Experience
Do you think you are a Gryffindor, or a Slytherin? A Hufflepuff? Perhaps a Ravenclaw? At the beginning of each school year the Sorting Hat sorts new Hogwarts students into the appropriate house, and you’ll have the opportunity to get sorted in a Hogwarts-inspired setting.

• MinaLima
Graphic designers Miraphora Mina and Eduardo Lima created countless pieces of unforgettable artwork, some of which will be on display including iconic pieces such as the Marauder’s Map, Daily Prophet and Hogwarts school books. Exclusive to the Celebration, they will be launching their brand new range of Harry Potter stationery, featuring original film graphic artwork. Limited edition prints based on the original prop designs will also be displayed.

• Scholastic
Celebrate Harry Potter and share your message about what Harry Potter means to you. Meet award-winning illustrator Kazu Kibuishi, who re-imagined the Harry Potter book covers and will be signing posters on Saturday, Jan. 30, and enter for a chance to win a box set of all seven Harry Potter books.

• Warner Bros. Entertainment
Do you have what it takes to defend yourself against a Dementor or soar above Hogwarts castle on Buckbeak? Step into some of your favorite scenes with this magical photo experience while surrounded by authentic movie props from the Harry Potter films.

To join the conversation, use #HPCelebration. For more information about the event, tickets and available exclusive event vacation packages, visit www.universalorlando.com/celebration.

Check out our videos from the first “A Celebration of Harry Potter” below:

Movie Review: ‘Big Hero 6’ won’t disappoint anyone in the family