Movie Review: ‘Big Hero 6’ won’t disappoint anyone in the family 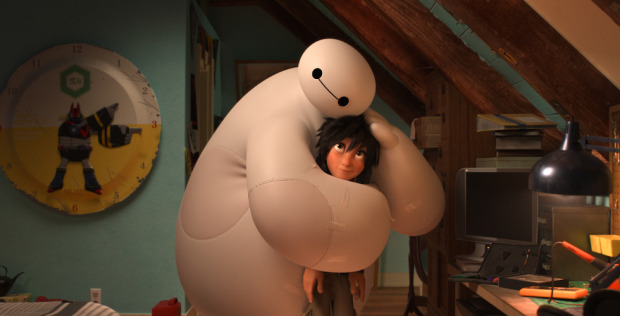 “Big Hero 6” is another Disney movie your whole family will enjoy. It’s funny, sad, cute and action packed. Who would have thought they could make a kick-butt robot huggable?

Disney Animation’s latest movie got its start as a Marvel comic book and that’s reflected on the big screen. “Big Hero 6” has super heroes, a masked bad guy and plenty of action. If “Frozen” was aimed at girls, this one is would be aimed right at the boys in the family. But like “Frozen”, this one will appeal to both genders thanks to its huggable star Baymax.

Hiro is a 14-year-old genius who has graduated from high school early and is spending his days making money by winning robot fights. But his brother thinks he’s waisting his talents and takes him to the institute of technology that he attends to try to convince him to apply. 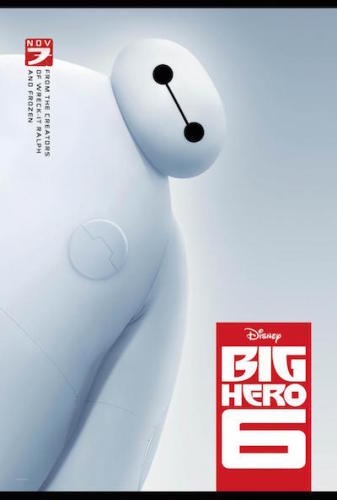 Hiro’s brother also shows him what he’s been working on, an inflatable robot called Baymax, designed to help people with their medical problems. He also introduces Hiro to his friends and all of the cool inventions they’re working on. So Hiro decides to apply by entering the science fair. He invents tiny robot magnets that join together to form anything the person controlling them can think of. But someone wants this technology for themselves and things go horribly wrong.

So Hiro transforms Baymax into a fighting robot, and each of his new friends from the school designs their own super hero weapons and outfits. They join together and go after the masked man who stole Hiro’s bots and blew up the school.

Even though “Big Hero 6” was originally a Marvel comic, don’t go looking to read them and expect to find anything like the movie. The story is so different from the comics, I’m not sure why they even used the name. The Baymax character is an original Disney creation, even though he shares a name with the dragon from the original comics.

Before “Big Hero 6” begins, you’ll see a cute new short called “Feast”. It’s about a hungry dog and his relationship with food and his owners. I found it cute, funny and a bit sad, but I wasn’t overly impressed with it. Don’t worry if you miss it.

“Big Hero 6” is rated PG, runs one hour and 33 minutes long and is available in 3D, but I didn’t notice it too much during the movie. Skip it if you’re trying to save some money.

Although the main story will keep your interest, keep an eye on the background. Not only is the fictional city of San Fransokyo beautiful (A mix of Tokyo and San Fransisco), but you may spot some hidden Disney references and more in the details of the rooms. For whatever reason, Stitch appears a couple of times. I think I also saw a nod to the Daleks from “Doctor Who”.

Even though this isn’t a Marvel movie, you’ll also see one big Marvel reference in the movie and in an extra scene after the credits. Don’t leave when the credits start! The extra scene is a great one for Marvel fans.

After you see the movie, you’ll want to give Baymax a hug yourself, and you can do so, and also meet Hiro, at Disney’s Hollywood Studios. Here’s a look: 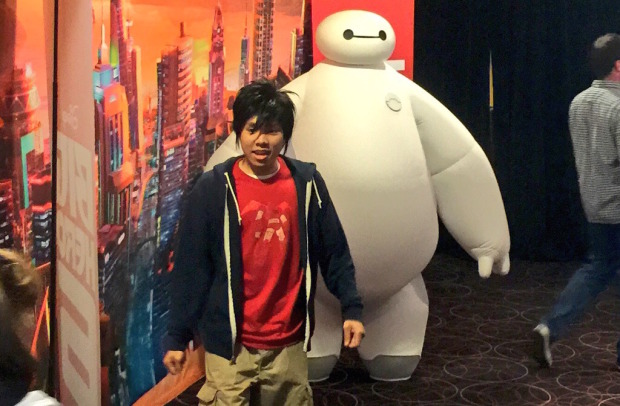 Here’s Baymax’s debut at the Toyko Film Festival, where John Lasseter gave him a hug:

OFFICIAL BOILERPLATE
From Walt Disney Animation Studios, the team behind “Frozen” and “Wreck-It Ralph,” comes “Big Hero 6,” an action-packed comedy-adventure about the special bond that develops between Baymax (voice of Scott Adsit), a plus-sized inflatable robot, and prodigy Hiro Hamada (voice of Ryan Potter).
When a devastating event befalls the city of San Fransokyo and catapults Hiro into the midst of danger, he turns to Baymax and his close friends adrenaline junkie Go Go Tomago (voice of Jamie Chung), neatnik Wasabi (voice of Damon Wayans Jr.), chemistry whiz Honey Lemon (voice of Genesis Rodriguez) and fanboy Fred (voice of T.J. Miller). Determined to uncover the mystery, Hiro transforms his friends into a band of high-tech heroes called “Big Hero 6.”
Inspired by the Marvel comics of the same name, and featuring breathtaking action with all the heart and humor audiences expect from Walt Disney Animation Studios, “Big Hero 6” is directed by Don Hall (“Winnie the Pooh”) and Chris Williams (“Bolt”), and produced by Roy Conli (“Tangled”). The film hits theaters in 3D on Nov. 7, 2014.

It may be a good movie, but like most people, I won’t know for a couple weeks…as us movie buffs will be going to see Interstellar instead of this.