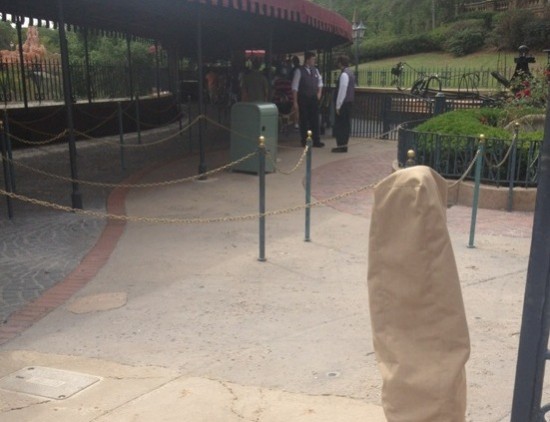 Both Walt Disney World and Universal Orlando will be testing the next version of their Express and Fastpass systems during May 2012. The two theme park companies will be trying two very different concepts.

Disney’s current Fastpass system offers free tickets to guests in the parks with a time printed for them to return to the shorter Fastpass line. Universal sells its Express Pass (at varying prices), which allows guests to enter the shorter Express lines whenever they’d like. Universal’s hotel guests can use their room key as an Express Pass at no additional charge. Both parks only offer guests the ability to skip the line on certain attractions.

Disney will be testing a new system that will allow guests to book their Fastpasses before they leave their homes. Universal will be testing the ability to allow guests to book their ride times from a device they’ll have with them in the park. Below are some details on both tests. Keep in mind that these are only tests and things may change before the final products are launched.

Walt Disney World
Disney will be testing their new Fastpass system from May 1 to 15 at the Magic Kingdom. Guests will be selected for the test before they arrive at Walt Disney World and will be making their Fastpass selections at that time. Once they’ve made their attractions choices, including dates and times to ride, they won’t be able to change them. (This may change if the new system is officially launched.)

The guests will receive a list of the attractions they chose and may visit City Hall or a Fastpass kiosk at Splash Mountain, Philharmagic, Stitch’s Great Escape or Jungle Cruise if they forget their Fastpass visit times.

The guests will receive a special Fastpass card which will have an RF (radio frequency) chip in it. When they arrive at their selected attractions, they’ll wave the card by special scanners to confirm their arrival.

The scanners have been set up at many attractions around Magic Kingdom for the test. Pictured above is a covered one at the Haunted Mansion, an attraction that doesn’t offer the current Fastpasses. Since this is a test, Haunted Mansion and other non-Fastpass attractions may or may not be a part of the new Fastpass once officially launched, although it is expected the new system will offer Fastpasses at many more attractions than are currently available.

Disney has said they have no plans to begin charging for Fastpasses, but it’s rumored that guests staying at Disney resorts may be offered to book more Fastpass rides than other park guests. Although the Fastpass cards used in this test won’t double for the guest’s room key, it’s expected they will once the final version of the new Fastpass system launches. There are also rumors of wristbands that will function as a guest’s “Key To The World” card.

Universal Orlando
Universal will be testing their new Ride Reservation System with their team members on May 2 and 3. This new version of the Universal Express pass is expected to have a new name once launched. It may replace the current system or be available side-by-side. Universal will provide guests with interactive pagers which will allow them to make attraction reservations, one at a time, for certain attractions.

Universal is also considering making their new system available via smart phone, in place of receiving the interactive pagers. It’s not known if the new system will be free to guests, but it’s expected to have a charge.

If you are selected to test either of these new “skip the line” systems, please contact us at [email protected] to let us know your thoughts on the new ride reservation systems.

Photos and videos from Busch Gardens’ first ever Grad Nite

What happened to just showing up at the park and waiting in a line? I’m not liking this at all. Time will tell I guess.

We are excited to hear if these new systems help make the guest experience more enjoyable!

I’ve always admired Disney’s fastpass system because once you entered the park, all guests were treated equally (unlike Universal’s Express Pass, which allows those with more money to cut in line). I’m disappointed to hear Disney might now give line preference to their hotel guests. I think once guests enter the park, everyone paying to be there should be treated equally. I didn’t mind Disney giving extra hours or free parking to Disney hotel guests, because it doesn’t take away from other park guest’s experience, but making this change would give other park guests less access to Fastpass and the lines longer for them.

I also agree that I’ve always loved the way Disney does their fastpass system. Once you start using it, it’s pretty easy to figure out. This reservation system is going to take all the fun out of exploring the Parks. Having to plan every minute of your time in a day at Disney World will make it more stressful than it already can be for most guests. You don’t have to be staying at the Hotels to so this, but you will have to have your whole day planned out to the minute before you get there. What if your kids have a melt down and it doesn’t work out to stay at the park that day. I don’t see how this is going to work. What if people don’t show up, does that still push your fast pass time at the park back. They already have trouble getting locals to go to the parks this will discourage them more because they don’t plan that far ahead. I really don’t see any up sides to this system unless you are an obsessed planner and then you already have the system down.

Hey, guys, don’t forget that entering the parks and go to lines will be still possible. If you don’t want to book the rides at Disney World, just do what you’re used to do.

Universal just reeks with class favoritism. If you’re rich you can make the poor stand in line all day while you enjoy yourself. And Universal is supposed to be run by the Hollywood elite who are Democrats and champions of the common man. I’ll tell you what they really are. They are liars and greedy money grubbers who care only for themselves. As far as they are concerned, the poor can go to Hell.

I think you meant testing will be during May 2013, rather than May 2012 as stated in the article.

No, this article was first posted last spring and at that time, the testing was only happening through May. But now, in Sept. testing has resumed.