This last month has been jam-packed with Disney Dining News and Events! From the opening
of the Epcot International Food & Wine Festival and the start of Mickey’s Not-So-Scary
Halloween Party in Magic Kingdom, to construction and announcements on both coasts, we have been busy at Disney Food Blog! 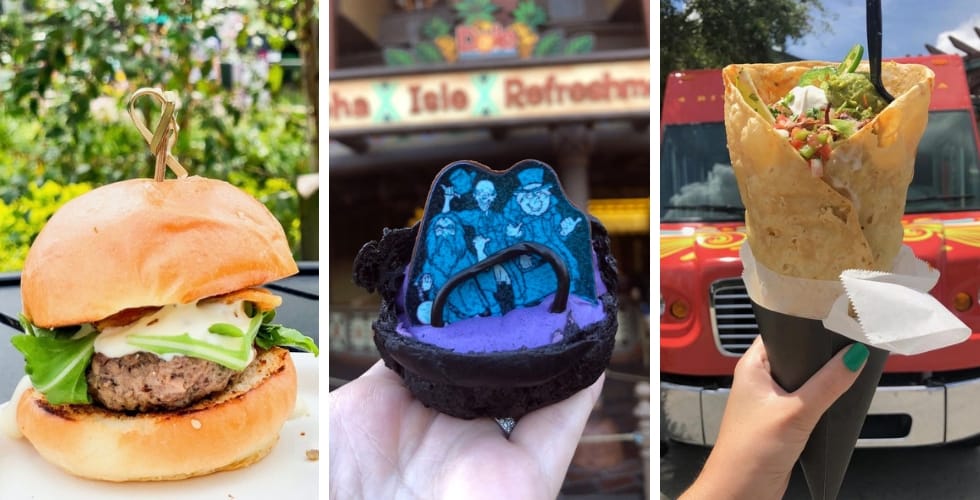 Check out all the latest updates in the world of Disney eats and treats, courtesy of The Disney Food Blog.

We were present for the opening of the Epcot International Food & Wine Festival! After
visiting every global marketplace and trying the new additions and returning favorites, we
developed a “Best Eats and Sips of the Fest” list. Some of our favorites include: 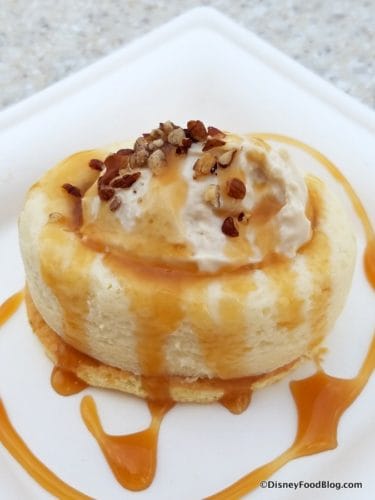 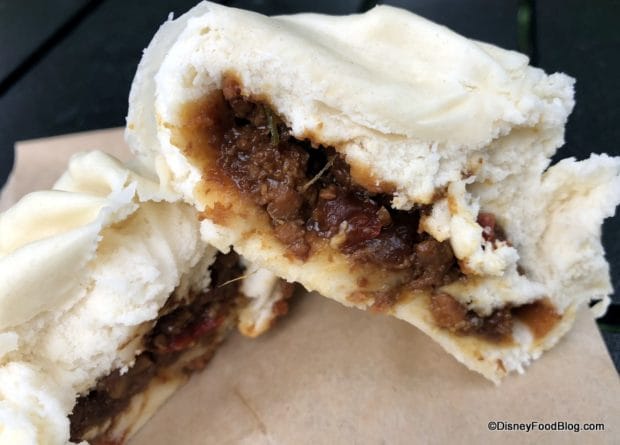 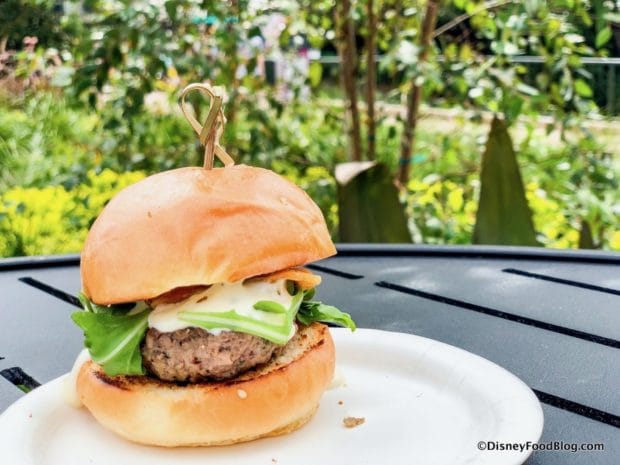 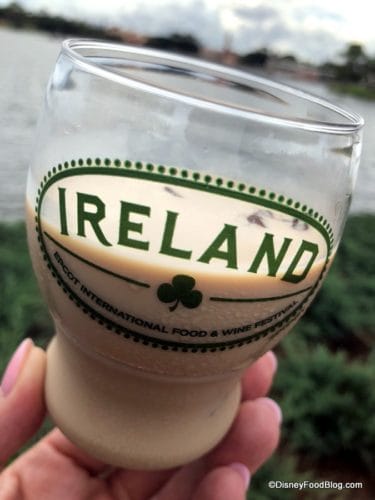 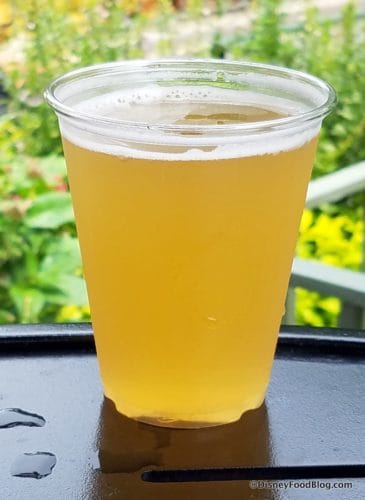 A new addition to the festival this year is the Candy Sushi class which we, of course, had to try out and review for you! Super cute and fun for kiddos and kids-at-heart, but we will say that we were the only adults without kids in our class, so…

We’ve seen the merchandise, sweet treats, décor, and attended Mickey’s Not-So-Scary Halloween Party (twice!) and brought all the news, reviews, and coverage to you. 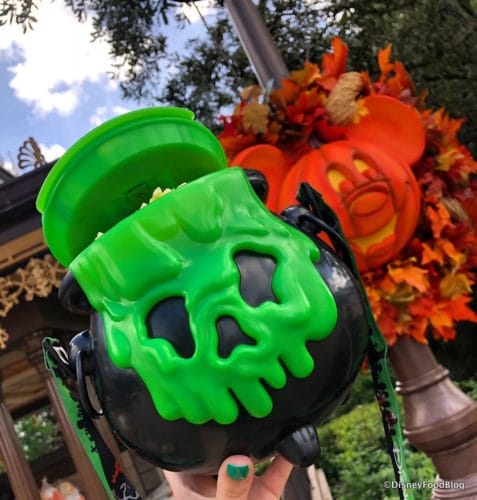 Don’t worry if you aren’t going to the party – there are plenty of Halloween treats available all
day, including the Light-up Popcorn Cauldron. 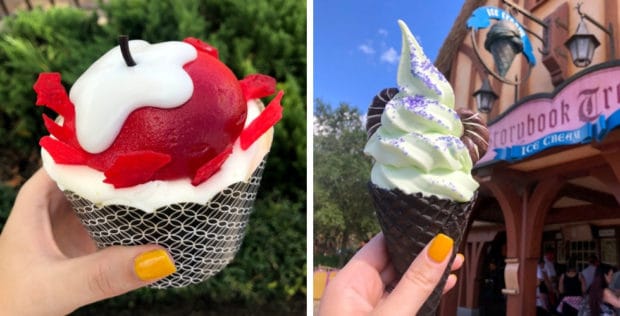 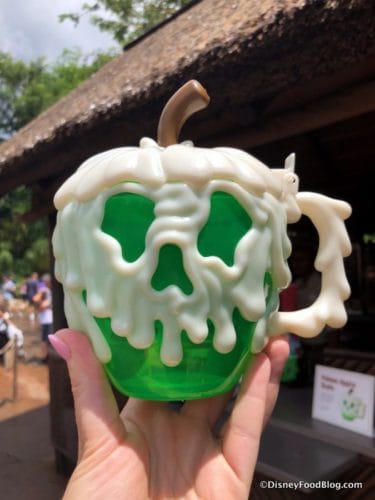 The popcorn buckets and refillable mugs have received a Halloween makeover for the season, and you can pick up a Green Poison Apple Stein around Disney property.

We were there for the first night of the Halloween Party and tried all of the new treats, scoped out the merchandise, and got a tour of the Happy HalloWishes Dessert Party. 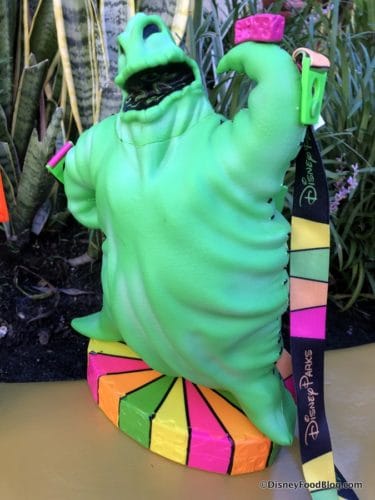 We started out with the party-exclusive Oogie Boogie popcorn bucket – be sure to get in line early for this bad boy!

Party-exclusive treats are picture perfect this year, as they pull their inspiration from The Haunted Mansion and Tim Burton’s “The Nightmare Before Christmas.” 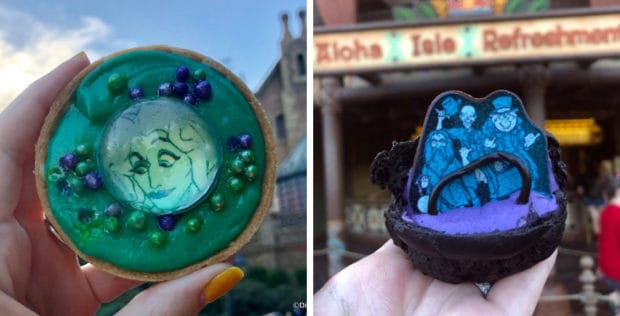 We’ve been keeping up with any news on events, openings, and refurbishments for you – and
the list is long! We were happy to see the re-opening of some guest favorites in Epcot just in
time for the Food & Wine Festival!

Star Wars: Galaxy’s Edge will open in Disneyland in the summer of 2019, and in Disney’s Hollywood Studios in late fall of 2019. Black Spire Outpost, the village on the planet of Batuu that guests will visit, will serve up drinks and entertainment at Oga’s Cantina! 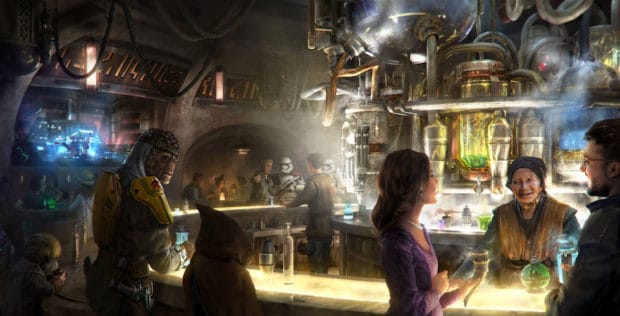 Oga’s Cantina is famous for its concoctions that feature “exotic ingredients using otherworldly methods, served in unique vessels.” Disney has confirmed that the menu will include themed cocktails, non-alcoholic specialty drinks, and “proprietary beer and wine options” – making this the first time alcohol is being served in Disneyland, outside of Club 33.

After a long refurbishment, Kringla Bakeri Og Kafe has re-opened in Epcot’s Norway Pavilion. It’s still located in the same space but has doubled in size. Don’t worry, the charm is still there, as well as fan-favorites like Rice Cream, Lefse, Berry Cream Puff, and School Bread. 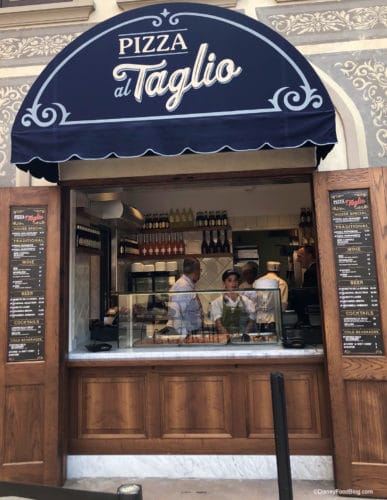 Another long-awaited re-opening in Epcot happened recently as well. The Pizza Window in the Italy Pavilion has re-opened with a new overlay and name: Pizza al Taglio. The menu includes a house special of Pizza San Gennaro, traditional offerings of Pepperoni or Margherita pizzas, and Mini Cannoli.

In addition, Centertown Market will be the name and location of the resort’s quick service dining location and guest registration. Counter service eats and grab-and-go options will be here, as well as seating areas for those who wish to relax and “dine on island time.”

Tambu Lounge at Disney’s Polynesian Village Resort has closed for refurbishment for a few
months, but don’t despair! You can still get your drink served in a pineapple, the Lapu Lapu, at two temporary locations set up in the resort. One location is by the Monorail exit doors during the morning, and the other is near the O’hana check-in during the evening. Both locations offer favorites from the Tambu Lounge menu.

Guess who’s coming to Disney’s Wilderness Lodge? Snow White, Grumpy, and Dopey will all be greeting guests as part of the brand new Storybook Dining at Artist Point! 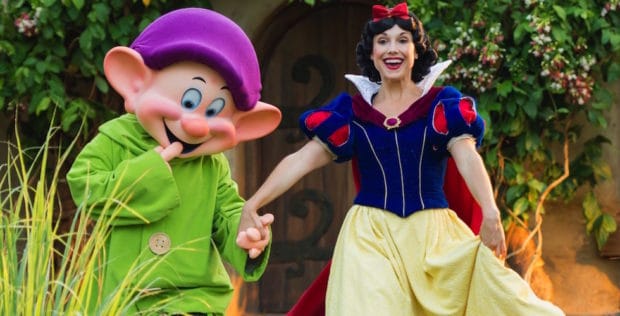 Plus, keep your eye out – the Evil Queen will be making an appearance as well! The menu will be a themed prix fixe meal which will include starters, individually plated entrees, and “sweet spells.” No opening date has been announced, but the experience is expected to debut this winter. 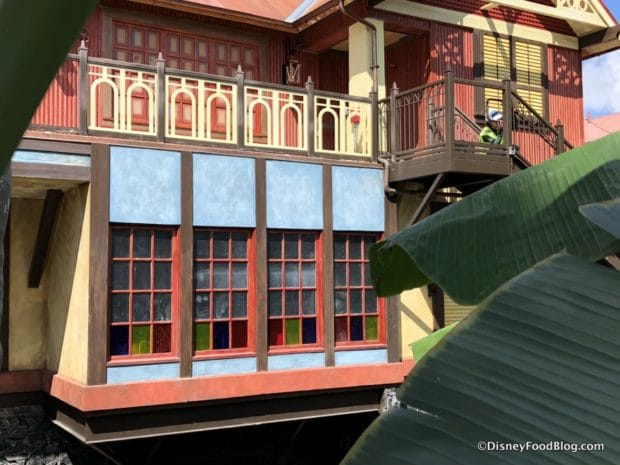 In Club 33 news – we’ve known the Club is opening locations in all four Walt Disney World parks, and now we see the progress moving along in Magic Kingdom. Construction walls and tarps have been removed at the location in Adventureland, indicating that the opening of this location is imminent – if it’s not already open.

Look what just rolled into Disney Springs… the 4R Cantina Barbacoa Food Truck! Currently taking up residence in the Disney Springs Marketplace, the food truck is a new venture for the 4R Restaurant Group, home to the popular 4 Rivers Smokehouses in the Orlando area. 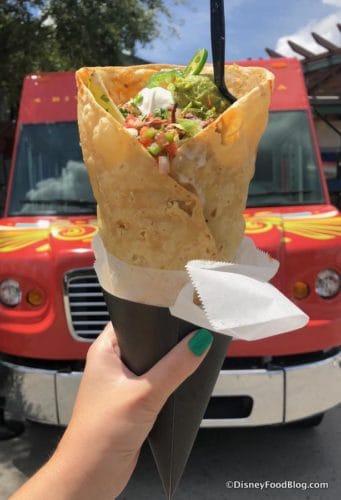 The menu includes Taco Cones, Tacos, Burrito Bowls, and Nachos, as well as Churro Balls and Dessert Nachos to close out your meal.

Disneyland Hotel’s Tangora Terrace recently closed for refurbishment. When refurb is completed in early 2019, it will re-open as the Tangaroa Terrace Bar & Grill with a new outdoor bar and an updated patio serving island cocktails and Asian-inspired cuisine. Plus, you can enjoy Dole Whip throughout the day and coffee in the morning from a dedicated service window.

Disney’s Grand Californian will see two changes. White Water Snacks will close soon and re-open later this year with a new look. During the closure, you can find grab-and-go
food and beverage options at Hearthstone Lounge.

Plus, a new pool bar is coming to the Grand Californian in the spring of 2019! The Arts and Crafts-style bar will incorporate natural boulder stonework and clinker bricks with a trellis structure to provide the perfect spot to relax.

In keeping with the general feel of its home in Disneyland’s Adventureland, much of the upcoming new eatery, The Tropical Hideaway, has remained an intriguing mystery. However, Disney has confirmed this location will open later this year, and gave some menu details. 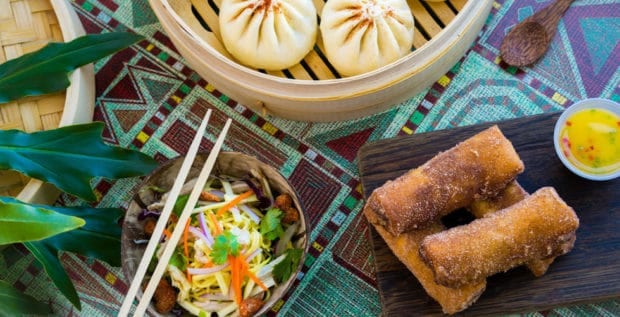 The new menu will include a variety of warm, steamed Bao Buns along with a tropical-inspired snack – Sweet Pineapple Lumpia, a pineapple and cream cheese spring roll. This treat will be quite familiar to travelers who have visited Pandora – The World of Avatar in Disney’s Animal Kingdom.

While out and about we always find some hidden and not-so-hidden gems. Here’s a sampling of
some of our finds:

The Donut Cart near Sleeping Beauty Castle has reinvented the Matterhorn Macaroon Donut and created the dangerously delicious Avalanche Donut! 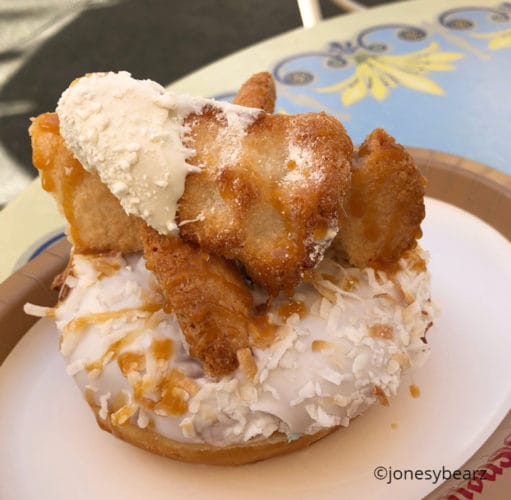 This massive treat is a yeast donut with vanilla glaze and toasted coconut. We know that you’ll really want this one for the chunks of coconut macaroon and the miniature Matterhorn! 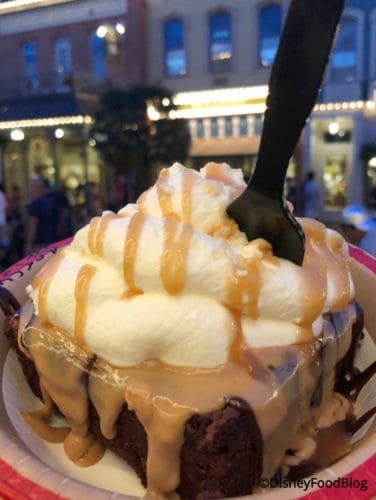 It starts with a dense, moist brownie, then a generous pouring of melted peanut butter, topped
with a mass of whipped cream – all drizzled with caramel.

Prince Eric’s Village Market is offering the Mermaid Donut. This yeast donut is topped with icing, and some iridescent sprinkles, accented with white chocolate shells and a mermaid tail. 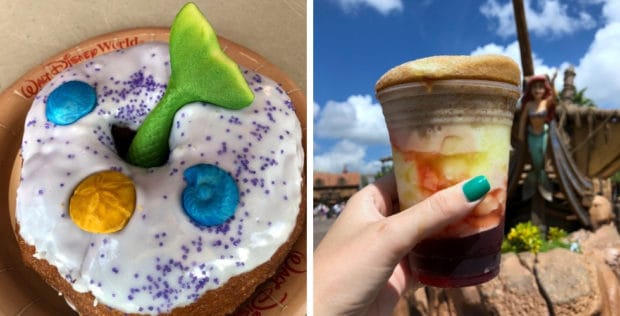 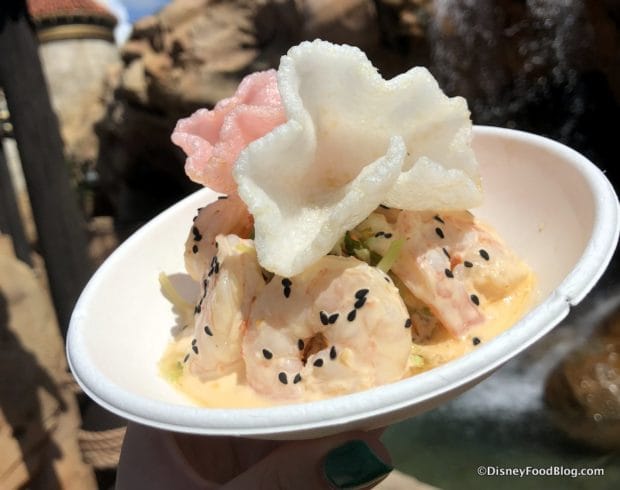 If you’re just looking for something not-too-sweet or evil from Prince Eric, try out the newly-added Sweet Thai Chili Shrimp. Served cold, this dish serves the shrimp topped with vegetable slaw and a ginger vinaigrette. The poached shrimp are seasoned with salt and lemon, tossed in a chili mayo, and garnished with black sesame seeds.

Vegan and vegetarian friends, Casey’s Corner in Walt Disney World’s Magic Kingdom has heard your cries! You can now enjoy a vegan-friendly hot dog at this location – the Plant-Based Slaw Dog! It’s a Spicy Italian Beyond Sausage covered in toppings like pickled slaw and vegan BBQ aioli.

We have a few “Flavor of the Month” updates! 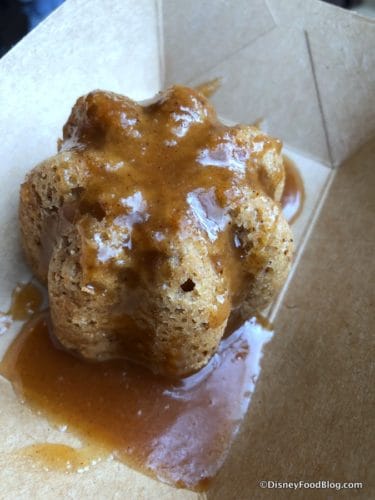 As Captain Jack Sparrow would ask, “Where’s the rum?” Well, we’ve found it, and it’s in the new Rum Cake at Tortuga Tavern! This mini bundt cake-shaped rum cake has a caramel sauce topping. The cake carries hints of spiced rum flavor, which is nicely pronounced – and very likely pirate-approved.

You have got to stop by Sunshine Seasons in The Land Pavilion to try out this hidden gem: the Turtle Brownie. 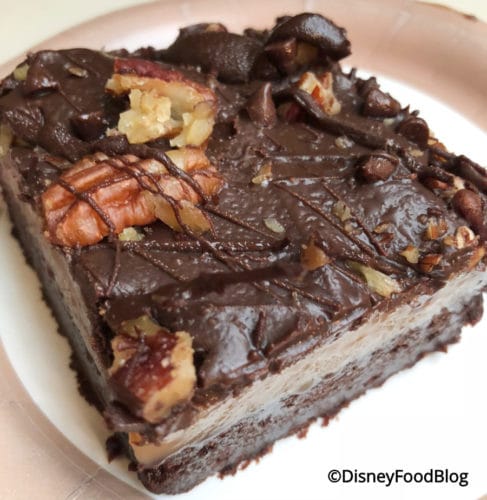 It’s made up of a layer of dense, chocolatey brownie, topped with gooey caramel that’s half an inch thick! The entire treat is covered in chocolate frosting, pecans, and chocolate chips. Bring a buddy to help you, or grab some milk and dig in!

Shave Ice is back at Disney’s Animal Kingdom outside of Harambe Market in Africa. Flavors to choose from include Mango-Passion Fruit, Watermelon, and Piña Colada – and you can spike your Shave Ice with Vodka or Rum!

Pongu Pongu, the popular watering hole and snack stop in Pandora, has recently posted a new breakfast menu! The menu is quite small, but it does feature Pongu Lumpia, as well as French Toast Sticks and a Sausage and Egg Biscuit. 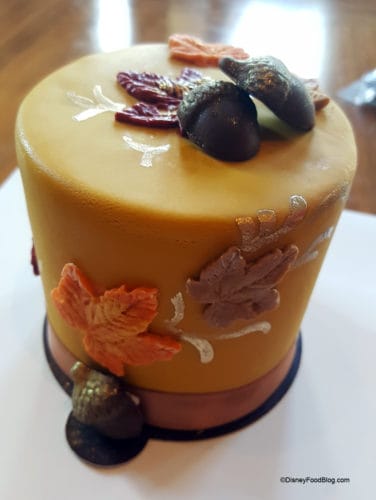 This is just a small portion of all that we covered in the last month on Disney Food Blog. We reported on new locations on the Mobile Order System, the elimination of straws and plastic
bags, a healthy snack at the Disney’s Yacht and Beach Club pool, and autumn themed cupcakes. Plus, we reviewed the Nomad Lounge, Wine Bar George, and the Rivers of Light Dessert Party!

Be sure to check out Disney Food Blog to keep up with the latest Disney dining and food news, as well as reviews!