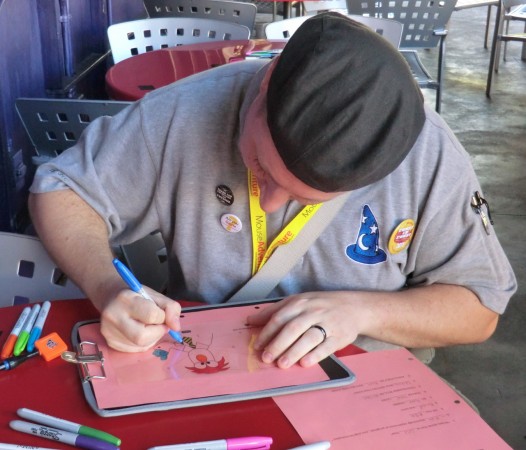 MousePlanet, a Disney fan site, will be holding their fourth edition of MouseAdventure World Explorers this November at the Walt Disney World Resort. Since Disney’s official fan club, D23, is not doing a scavenger hunt this year, this event is a great opportunity for Disney fans to have a fun challenge at Disney World.

If you love word puzzles, you’re in luck: many MouseAdventure quests incorporate an element of popular paper-and-pencil puzzles like word searches, cryptograms and logic problems. But don’t think you’ll be sitting on a park bench all day, because teams travel far and wide both to find clues and to solve the puzzles they lead to. You may need to ride attractions, watch shows and explore far-flung areas of the resort, all while using your keen observational skills to complete quests.

In addition to the core quests of each game, a variety of side games add another element to the competition. Teams might receive a sheet of EyeSpy photos and be directed to identify mystery pictures taken within the parks, or be asked to find and obtain a list of scavenger hunt items. A trivia portion is usually optional, but a strong grasp of Disney minutiae can help set your team apart. Some quests may even require you to find, interact with or perform for MouseAdventure crew members!

The event will run from 9 a.m. to 6 p.m. on Saturday, Nov. 3, 2012 at the Magic Kingdom. Groups will reconvene later in the evening to announce results. Prize packages are mailed to the winners after the event.

If you’d like to sign up or read recaps from past events, visit mouseplanet.com/mouseadventure. Registration closes on at 5 p.m. on Friday, Oct. 19, or when the event sells out. The cost is $100 for a team of up to four. Magic Kingdom park admission is not included.

Stars in the Parks: Gloria Estefan transforms into the undead for Halloween Horror Nights 22

Thanks for the helpful post. It is also my belief that mesothelioma cancer has an incredibly long latency interval, which means that signs of the disease might not emerge until finally 30 to 50 years after the initial exposure to asbestos fiber. Pleural mesothelioma, and that is the most common type and influences the area round the lungs, could cause shortness of breath, upper body pains, and also a persistent cough, which may result in coughing up maintain.