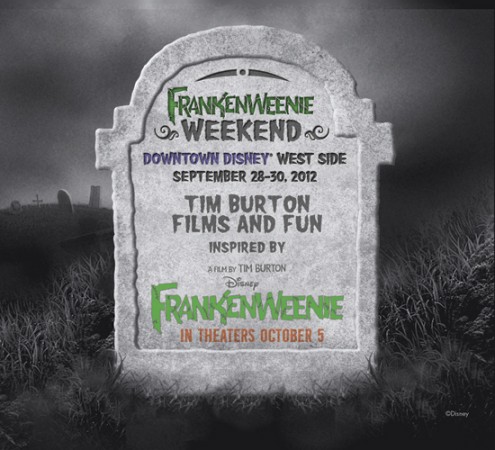 Disney will be holding a special Frankenweenie Weekend at Downtown Disney West Side to celebrate the Oct. 5 opening of Disney’s new stop-motion animated movie Frankenweenie. The celebration will take place from Sept. 28 through 30, 2012 and include a 3D sneak peek, photos, treats and a first-ever Walt Disney World Resort appearance of Jack & Sally from Burton’s The Nightmare Before Christmas.

Until capacity is reached, fans can sign up for a free screening of Frankenweenie at AMC Downtown Disney 24 by signing up at rsvptrack.com/disneysneakpeek/frankenweenie. (Be sure to tell them you heard about it through Orlando Attractions Magazine.)

There will also be exclusive screenings of the following movies with an extended 3D sneak peek of Frankenweenie for only $6 a ticket:

Here is a run down of the other events:

Thanks for the heads up on the free screening! I was able to reserve a spot and I did mention OAM.

So me and my best friend went down to downtown Disney to see all this cool stuff and NONE OF IT WAS THERE! We asked like ten employee’s and a security guard and they all thought we were crazy. there was no “New Holland Pet Cemetery picture spot presented by HGTV and inspired by Frankenweenie” no “First Walt Disney World meet and greet with Jack and Sally from The Nightmare Before Christmas” everyone acted like they had never heard about ANYTHING related to the movie taking place at downtown Disney this weekend. They also had very little Frankenweenie merchandise as well. We were VERY disappointed and will never believe anything we read event wise from this website again. It was embarrassing.

I’m sorry you had that experience but I can tell you it definitely is happening each night this weekend. We were there last night and posted a video of Jack and Sally on our YouTube channel. We also know it is going on right now. Just in case you were confused, this is only at Downtown Disney in Florida.

…maybe because you were at Disneyland and not Disneyworld. …in Orlando. 😉

opps. my bad. still sucked though.

My husband & went Sat night to this event & there was a small picture spot of the New Holland Pet Cemetery, but absolutely no special Frankenweenie food – lemonade or sausage dog nowhere to be found. We arrived @ 7:00pm & did not see anything but the photo op of the pet cemetery which BTW was so small it was ridiculous. There was very little Frankenweenie merchandise in D-Trend & no where else when it was said it would be available on mobile carts. We walked up & down & quite frankly, it was so crowded that we couldn’t get a bite to eat anywhere (we live locally so we know it does get crowded on Sat nights), but this was overall so disappointing! We also saw only a couple of guests walking around with special Frankenweenie “masks” that I guess were given out – but when??? We didn’t see any employees giving out these masks by AMC either. We will never go to anything hyped like this at DD again. Not worth the trip & aggravation!

Thanks for posting this info…as always. I can’t believe that people are here complaining. We seen the free screening on Sunday, then got in line at 4:30 for the meet and greet and met Jack & Sally by 6:12pm.

Overall a great Sunday that the kids and adults enjoyed.