Kim Possible fans will want to head to Epcot before this summer. That’s when the Kim Possible World Showcase Adventure will be turned over to Agent P of Phineas & Ferb fame. 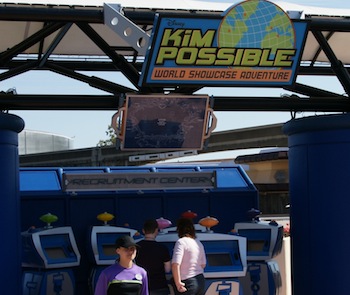 It’s been a rumor that the Kim Possible game, based on the canceled Disney Channel television show, would be changed over to the Disney Channel hit show Phineas & Ferb for a while now. Today the Disney Parks Blog confirmed it.

Coming this summer, Disney Phineas & Ferb: Agent P’s World Showcase Adventure is based on the wily secret-agent alter-ego of Perry the Platypus – faithful pet to the title characters from Disney’s animated series Phineas & Ferb. Although just a simple pet to Phineas and Ferb, Perry turns into Agent P in each episode to help stop the misguided plans of his nemesis, Dr. Doofenshmirtz.

For the Kim Possible game, guests follow instructions given on the screen of a cell phone to interact with objects hidden around World Showcase. There are different missions to complete in many of the different countries of World Showcase. The Agent P game will be similar as guests become “agents” and use a “high-tech secret agent device” to search for clues. Different cases will be available in Mexico, France, Germany, Norway, Japan, China and the United Kingdom.

Aerial view of the Jaws and Wizarding World areas at Universal

Aw, this game was so fun! Honestly, my boyfriend and I are in our late twenties and gave the Kim Possible game a try because we were trying to kill time before the fireworks. Surprisingly the game was a lot of fun.

I hope they don’t change it too much! We’re coming back later this year. Any other adults try it?