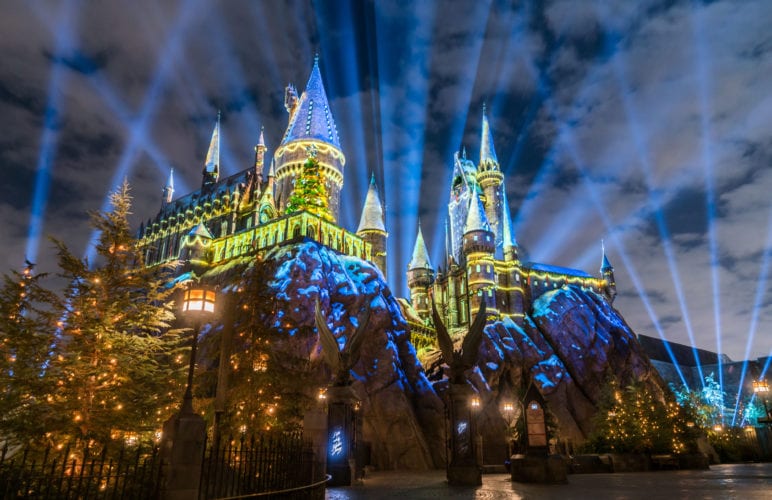 Both Orlando and Hollywood are celebrating a Harry Potter Christmas with Universal’s new holiday entertainment.

The “most wonderful time of the year” is here, and with it comes a sleighful of fresh Universal holiday entertainment in both Orlando and Hollywood, featuring the parks’ first-ever Harry Potter Christmas celebration.

Following several days of previews for the media and annual passholders, 2017’s holiday festivities officially kick off today (Saturday, Nov. 18) at the Universal Orlando Resort, and will begin on Nov. 24 at Universal Studios Hollywood. The seasonal events will conclude on Jan. 6 in Orlando, and on Jan. 7, 2018 in Hollywood. All holiday entertainment in the parks (with the exception of character meals) is included with regular admission.

Christmas in the Wizarding World of Harry Potter

Hogwarts Castle is the centerpiece of the Christmas in the Wizarding World of Harry Potter celebration. Every night during the season, the castle becomes the canvas for The Magic of Christmas at Hogwarts Castle, a seven-minute-long animated light show choreographed to a musical arrangement from the Harry Potter movies. Multiple times each evening after dusk, colorful state-of-the-art projection mapping will illuminate Hogwarts School of Witchcraft and Wizardry, accompanied by bursts of pyrotechnics.

If you can’t make it yourself in person, enjoy our video of the new Harry Potter Christmas projection show at Universal Orlando’s Islands of Adventure:

In addition to the light show (which is best experienced during the final showing of the night, due to crowding during earlier performances), the Hogsmeade Villages in Orlando and Hollywood have been decked out with uniquely themed Christmas decorations, garlands and lights, as has Diagon Alley at Universal Studios Florida. Furthermore, the a cappella Frog Choirs that perform in both Hogsmeades will switch out their regular repertoire in favor of some wizarding Christmas carols, as seen is this video:

Exclusively at Orlando’s Diagon Alley, Celestina Warbeck and the Banshees have learned several new holiday songs, which were penned by the original songwriting team of Zachary & Wiener:

If all this Harry Potter Christmas cheer makes you hungry, special holiday food is being served in both coasts’ Wizarding Worlds, including the seasonal return of hot Butterbeer, and a new Holiday Dinner featuring roast turkey with gravy at Three Broomsticks. And to help fill up your stockings with gifts, stores in Hogsmeade and Diagon Alley are stocking new seasonal items like Harry Potter snowglobes, ornaments and tree toppers. Several new interactive namesake wands are added to the collection, including the Cho Chang, Cedric Diggory, Yaxley and a new Death Eater wand.

Outside of the Wizarding Worlds, both Universal resorts also observe Grinchmas, their long-running celebration of Dr. Seuss’s hairy green antihero. At both Universal Orlando’s Islands of Adventure and Universal Studios Hollywood, you’ll be able to meet residents of Who-ville and the Grinch himself (modeled after the Jim Carrey film) and see a stage show retelling the classic book, “How The Grinch Stole Christmas.” Orlando even offers a Grinchmas character breakfast where you can dine with with “Mean One” himself. Universal Orlando celebrates Grinchmas every day from Nov. 18 to Jan. 7, but in Hollywood it is only on select dates in December (2-3, 9-10, 15-31). Watch this video from a past version of Orlando’s Grinchmas production for a preview of the show:

The other big holiday news is that Universal Studios Florida has launched an all-new holiday parade, which starts rolling earlier in the season than ever before. 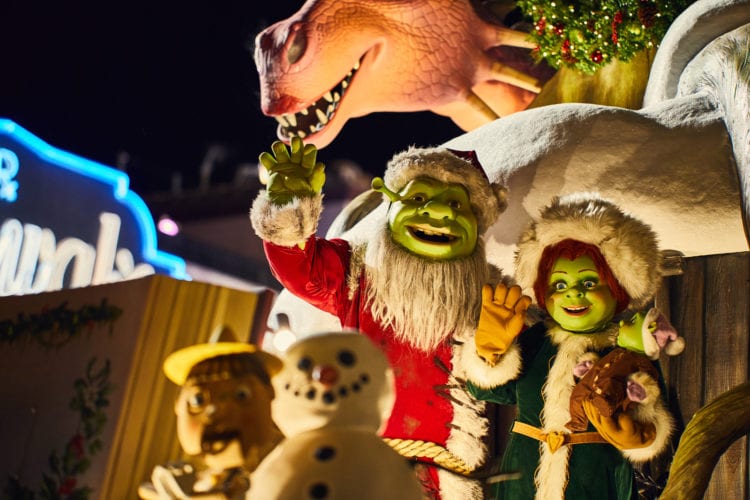 The new parade, which includes more than 30 larger-than-life floats and inflatables along with over 100 performers, still features balloons inspired by the beloved Macy’s Holiday Parade in New York, but now stars favorite characters from Despicable Me, Shrek, and Madagascar. Get a front row view of this impressive new parade with this video:

Also at Universal Studios Florida only, holiday music sensation, Mannheim Steamroller, returns to Universal Orlando for live concerts on Nov. 18, 19, 25, 26 and Dec. 2, 3, 9, 10, 16 and 17. Be aware that, while these concerts are free to all park attendees, seasonal passholders are blocked out from visiting Universal Studios Florida on these concert dates (Islands of Adventure is still available). Watch this sample of a previous Mannheim Steamroller appearance at Universal Orlando:

For more information about the holiday celebrations at Universal, visit UniversalOrlando.com/Holidays or UniversalStudiosHollywood.com, and be sure to watch this week’s episode of Attractions The Show for coverage of holiday happenings on both coasts.

Change is inevitable – A look at...