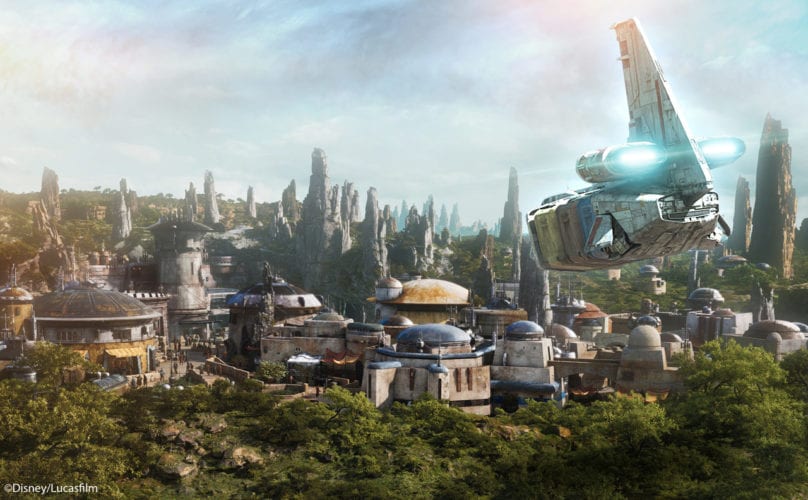 Guests can now get a preview of Batuu, the newly named home of Star Wars: Galaxy’s Edge, aboard Disney’s Star Tours simulator.

The eagerly anticipated Star Wars: Galaxy’s Edge expansions at Disneyland and Disney’s Hollywood Studios won’t open until 2019, but guests now know that the planet they will be visiting is named Batuu, thanks to a new scene inspired by The Last Jedi that debuted today on the Star Tours attraction.

During the Star Wars Celebration convention in Orlando earlier this year, Disney announced that a new segment would be added to their Star Tours simulator rides, featuring the red and white mineral planet of Crait from the upcoming film, Star Wars Episode VIII: The Last Jedi. That new addition debuted today at Disneyland, Walt Disney World, and Disneyland Paris. In addition to the expected visit to Crait, the new additions include cameos from Poe Dameron, Maz Kanata, and even Kylo Ren. But the big news is that the ride now concludes at the setting of Star Wars: Galaxy’s Edge, which has been officially named Batuu.

Imagineer Scott Trowbridge describes Batuu as a “remote outpost on the galaxy’s edge was once a busy crossroads along the old sub-lightspeed trade routes, but its prominence was bypassed by the rise of hyperspace travel. Now home to those who prefer to stay out of the mainstream, it has become a thriving port for smugglers, rogue traders and adventurers traveling between the frontier and uncharted space. It’s also a convenient safe haven for those intent on avoiding the expanding reach of the First Order. While Batuu may be new to us, it is clearly already familiar to many characters from the Star Wars saga as a stepping off point for epic adventures.”

Previously, the Star Tours attraction — which was reimagined with 3-D in 2011 — utilized randomized segments blending locations and characters from both the Prequel (Episodes I-III) and Classic (Episodes IV-VI) Star Wars trilogies, providing a different experience on every ride. For now, every voyage will visit Jakku (from The Force Awakens) as well as Crait and Batuu, through cameos and transitional moments may change on each trip. Eventually, the attraction is rumored to split into two versions, with guests getting the option to experience either the original saga’s random segments, or solely the ones from the new sequels.

If you can’t wait to visit Batuu in person, you can spoil the secrets by watching our on-ride POV video of the new Star Tours destination:

Should Splash Mountain be rethemed? – DePaoli...

A look at how the international Disney...