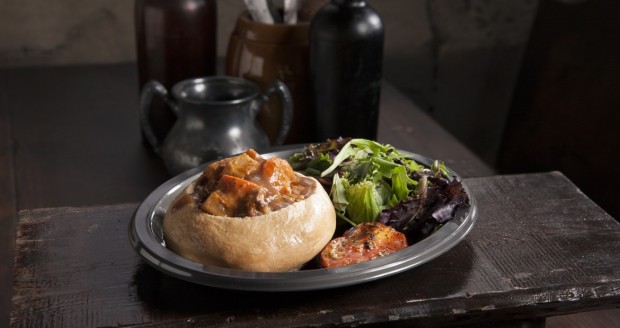 Universal Orlando has released details about some of the many food and beverage options guests will be able to enjoy inside The Wizarding World of Harry Potter – Diagon Alley when it opens this summer.

From traditional British favorites like Bangers and Mash to ice-cream with unique flavors such as Chocolate Chili and Butterbeer, guests will savor all-new dining experiences created exclusively for the new land.

Some of the food options at the Leaky Cauldron restaurant include:

Desserts at the Leaky Cauldron include Chocolate Potted Cream, Cranachan and Sticky Toffee Pudding. A breakfast will also be offered featuring two items only found at Diagon Alley, an Apple Oatmeal Flan with Yogurt and Fruit and an Egg, Leek and Mushroom Pasty.

There will also be a cart located in Horizont Alley called Eternelle’s Elixir of Refreshment, where guests can choose from a variety of elixers to add to their Gillywater to see their drink transform before their eyes and experience delightful flavor surprises.

Butterbeer is very popular with guests visiting the original Wizarding World of Harry Potter – Hogsmeade, so it has been turned into a new flavor of soft-serve ice cream for the ice cream store. Also available will be a variety of fresh pastries, scones, tarts and sweet cakes.

For a full look at the offerings and an interview with the team behind the food and beverage options, visit the Universal Orlando Blog. The Wizarding World of Harry Potter – Diagon Alley is set to open at Universal Orlando this summer.