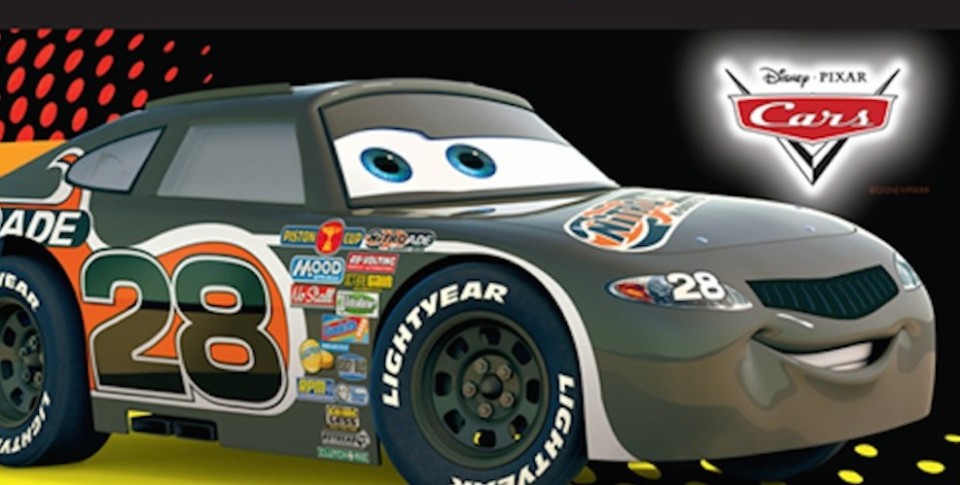 Two characters from the animated feature film “Cars” are coming to life at the Richard Petty Driving Experience – Aiken Axler and Sage VanDerSpin.

The two full-size custom character cars, created by “Cars” creative director Jay Ward, will enter the line-up beginning June 14. The #28 Aiken Axler and #80 Sage VanDerSpin cars will be used in the new Piston Cup Junior Ride-Along program. For $59, the Junior Ride-Along program gives children ages 6 to 13 (and at least 48 inches tall) the chance to experience real-life racing excitement as they ride shotgun with a professional driving instructor for three laps in a specially equipped Piston Cup race car.

According to their official biographies, #80 VanDerSpin races for Team “Gask-its” and is the youngest winner of the Junior Piston Cup Pro Series. Axler is the #28 Nitroade racer who captured the Vitoline Rookie of the Year honors in his first full season of Cup competition. Both will be sporting their team colors and sponsors, along with their larger-than-life personalities, thanks to a specialty window wrap.

“The window wrap makes it possible to see the character eyes from the exterior, which really brings them to life, but doesn’t interfere with the view of the track,” added Kirby. “Once passengers are inside the car, the track can be clearly seen so they can fully enjoy the experience of racing around the track.”

Junior Ride-Alongs do not require reservations and are given on a first-come, first-served basis. Find out more information about program offerings, dates and times by visiting DrivePetty.com or call 800-237-3889.

This Disney-themed wedding is a theme park-lover’s...