Little girls will soon have a new choice when getting a makeover at the Downtown Disney Bibbidi Bobbidi Boutique. Starting Feb. 24, the boutique will offer a Secret Star Makeover, just like the role Miley Cyrus plays on Hanna Montana.

For $109.95 they’ll receive the makeover including hair (wig) and makeup, and a guitar purse, a makeup kit, a t-shirt and a headset. Once they’re converted into the secret star, they’ll take part in their own photo shoot and will get to choose one photo printed as part of their package. 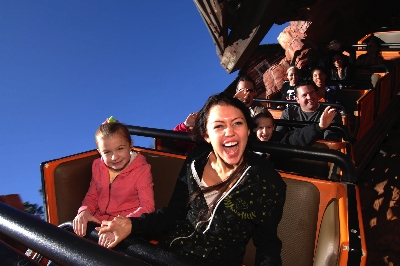 Singer/actress Miley Cyrus (right) makes a dream come true at the Magic Kingdom for 6-year-old Olivia Sexton (left), from Findlay, Ohio. Disney helped Cyrus make a “magic moment” for Sexton by choosing her among guests at the park to ride Big Thunder Mountain Railroad with the chart-topping star. Cyrus was with family and friends at Walt Disney World for a special “wrap party” she hosted to celebrate the end of her record-breaking concert tour.

'The Simpsons Ride' Named with Logo and Web Page Launch