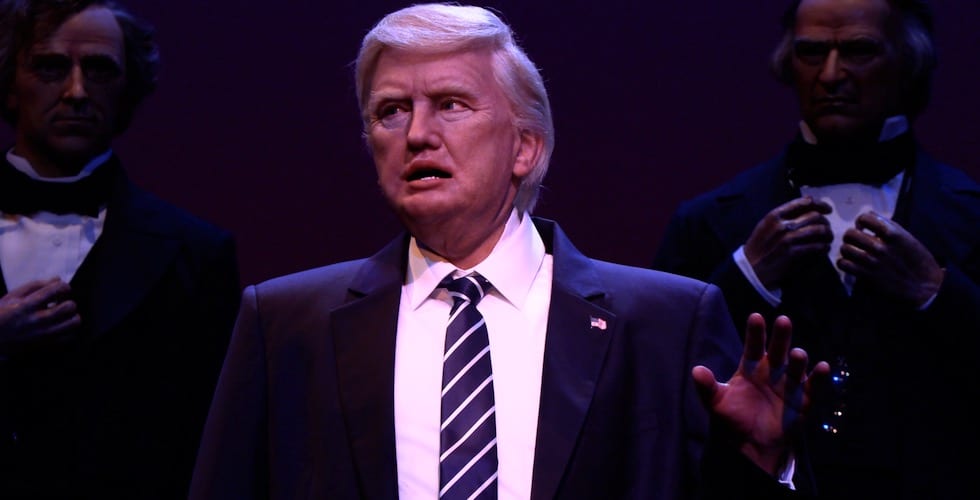 The Hall of Presidents is now open after a year-long refurbishment to add our newest president to the show, along with other enhancements.

After a year of being under refurbishment, The Hall of Presidents has officially soft-opened in Magic Kingdom at the Walt Disney World Resort. The attraction is scheduled to officially reopen tomorrow, Dec. 19.

With new enhancements to the show, this theatrical production will bring the story of the American presidency to life like never before. Originally envisioned by Walt Disney himself to honor the country and its presidents, this attraction began with the single animated figure of President Abraham Lincoln that was developed for the 1964-1965 New York World’s Fair. In 1971, technological advances made it possible for Imagineers to make Walt’s dream come true by including every president who ever served the United States in the show.

In addition to updating the show’s content, Imagineers have included the latest in theatrical design and audio-animatronic technology. Historical moments across more than 200 years of the American story come to life on a panoramic 180-degree screen. High-quality sound, projection, lighting and other enhancements take guests into these moments that helped to shape and define our nation.

In the newly updated show, Morgan Freeman no longer narrates the production. Former president Barack Obama’s animatronic has been moved to the back row of the president lineup.

As part of the tradition with every new president, an audio-animatronic figure of President Donald J. Trump has been added to the show, and newly-recorded remarks by President Trump exclusively for The Hall of Presidents – just as every sitting president has done since the early 1990s.

Check out the former iteration of The Hall of Presidents here:

The holidays are alive and well at Holy Land Experience

He’s not for the people, except maybe the uber rich, hopefully we will be adding a new president in 3 years (or sooner).

Trump is for Trump. Sexual Molesters should not be on stage in Walt Disney World. I am sure the BOOs are going to be heard at every show and very disappointed in Disney for allowing this.

LOL Walt Disney was a molester….

Guess they need to remove several of past Presidents for the actual action and not locker room talk!

They need to remake President Trump. They made him look evil and I’m offended that they show him as such. It’s a disgrace!

I heard one of the talk shows said they originally were making Hillary and had to change plans. Guess they were trusting the fake media!

Trump looks like a cross between E.T. and Peter Boyle in Young Frankenstein!

Get cozy in these Disney Princess-inspired Blankie...