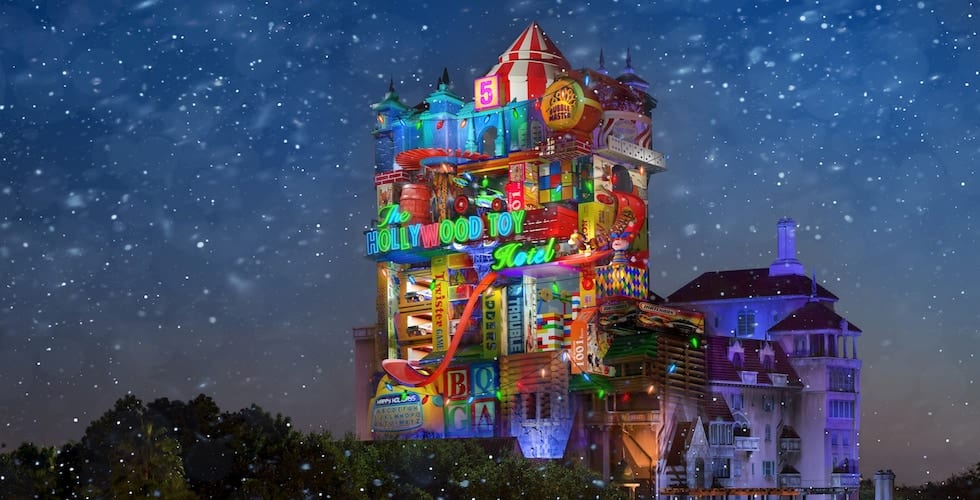 The Hollywood Tower Hotel will transform into the “Hollywood Toy Hotel” this holiday season, as a flurry of fun comes to Disney’s Hollywood Studios.

New festivities at Hollywood Studios, including a new nighttime experience on Sunset Boulevard, new decorations around the park, and the return of “Jingle Bell, Jingle BAM!” will bring seasonal fun back from Nov. 9 through Dec. 31.

“Sunset Seasons Greetings” is a new holiday experience that will feature projections of Mickey, Minnie and other Disney characters celebrating their favorite Christmas stories on a festively decorated Sunset Boulevard. This holiday spectacular will transform The Hollywood Tower Hotel with projection mapping into a variety of scenes, including a pile of Christmas gifts, a gingerbread house, and “The Hollywood Toy Hotel.” This show will run continuously throughout each night.

Echo Lake will get a holiday makeover with extra-large ornaments, colorful garlands and a huge Christmas tree centered on the water as part of their decorations. Dinosaur Gertie will also join in on the Christmas spirit with a dinosaur-sized Santa hat.

The nighttime fireworks spectacular, “Jingle Bell, Jingle BAM!,” will return for its second year at the park as well, displaying Disney characters on their yuletide adventures to get Santa back to the North Pole in time to deliver presents on Christmas Eve.

Guests can also reserve a spot in the show’s dessert party, which includes holiday-inspired snacks and desserts, wine, beer, and speciality alcoholic and non-alcoholic drinks. A surprise Disney character will be there to join in on the fun, and will be available to pose for photos and sign autographs. Visit DisneyWorld.com/dining to make a reservation.

Even more Frozen fun is coming to “For the First Time in Forever: A Frozen Sing-Along Celebration,” as Olaf is joining Anna, Elsa and Kristoff in their stage show. Just for the holidays, the show will feature new songs from the upcoming Disney animated short, “Olaf’s Frozen Adventure,” which will air before Disney-Pixar’s “Coco.” Check out the trailer for the new “Frozen” short here.

Guests will be able to join Mickey, Minnie, Donald, Daisy and Goofy for lunch and dinner in their holiday best during Minnie’s Holiday Dine at Hollywood and Vine from Nov. 6 through Jan. 7. Reservations are available to book now, and can be made here.

No holiday celebration is complete without Santa Claus himself, who will be returning to Once Upon a Time daily to greet guests and listen to children’s wish lists. When Santa leaves to return to the North Pole, Santa Goofy will fill in for the big guy from Dec. 25 through Dec. 31.

Uh. April 1st was months ago.

Mythbusters: Behind the Myths Tour coming to...