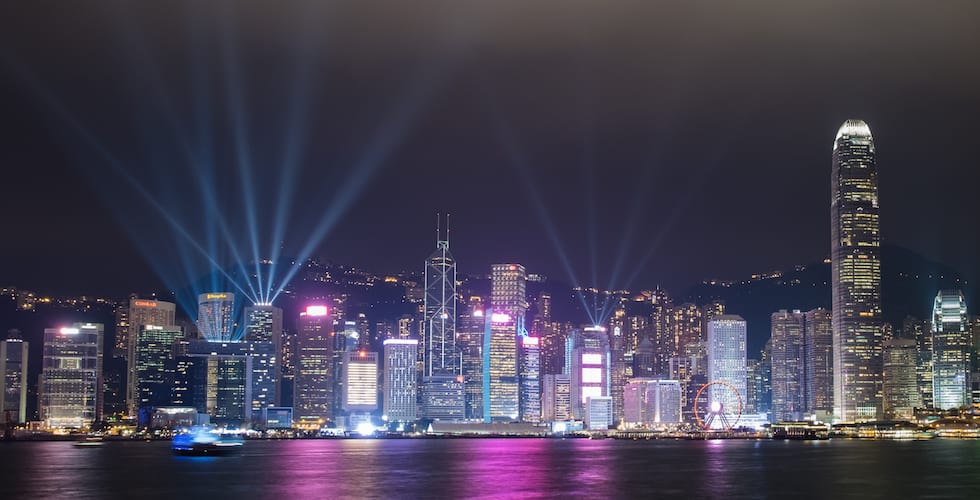 Two light shows over Hong Kong’s Victoria Harbour unveiled this past week: a new version of the nightly multimedia light show, “A Symphony of Lights,” and the winter version of the “Hong Kong Pulse” light show.

These two shows, which are best viewed from the Tsim She Tsui waterfront, brighten up Hong Kong’s Christmas with the illusion of an icy atmosphere and lighting effects at the Hong Kong Cultural Centre.

The new version of “A Symphony of Lights” features rays of light sent out in rhythmic patterns from 40 buildings and locations on both sides of the Victoria Harbour. The show also includes various lighting effects, like colored lasers, searchlights, and all-new beam lights sent out in a fan-shape from the roof of the Central Government Offices and the Revenue Tower.

Ten LED panels atop a number of harbourside bulldings have joined in the show fo the first time, and display messages and images to encourage audience participation. Another complement to the show is its music, performed by the Hong Kong Philharmonic Orchestra.

This unforgettable light and sound experience runs for 10 minutes, and begins at 8 p.m. each evening.

Once “A Symphony of Lights” ends, the winter version of the “Hong Kong Pulse” light show begins at the Cultural Centre. This 3D projection show starts with a snowstorm that covers the entire area in ice and snow, blowing away the numbers on the clock tower – stopping time just before Christmas arrives.

A dragon then appears, and sets out to find the missing numbers scattered across Hong Kong landmarks. After finding them all, the dragon restarts time and saves Christmas. Throughout the show, the viewing area is dusted with a snowing effect, as well as glowing LED balls and a giant crystal ball. This 8-minute performance runs now through Dec. 28, 2017.

What’s new and returning for the ‘Macy’s...