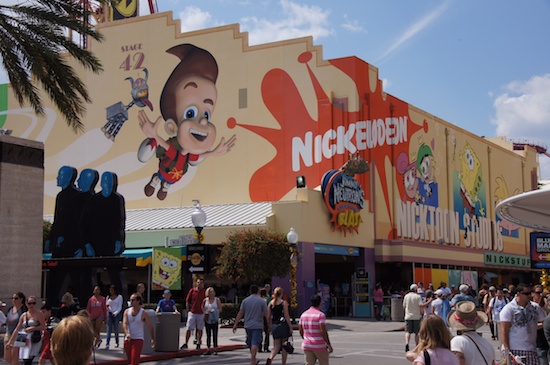 The boy genius and his buddy Carl are taking a break from saving the Universe and will be leaving Universal Orlando for good later this year.

Jimmy Neutron’s Nicktoon Blast ride at Universal Studios will be closing on April 1 as park officials begin to plan for its replacement. The ride will be open again during busy spring and summer days, but it will close permanently on Aug. 18, 2011. There’s no word on what will happen to the SpongeBob Squarepants meet and greet at the ride’s exit or the Nickstuff store.

A replacement hasn’t been named yet. All Universal has said is that it will be an all-new experience based on an amazing concept and that it will be a natural fit for Universal Orlando. They also said it is just one of many exciting things planned for the next couple of years.

Jimmy Neutron’s Nicktoon Blast is very similar and has the same ride vehicles and screen as the ride it replaced, The Funtastic World Of Hanna Barbera. It’s unknown if the new attraction will use the same simulator.

Well my instincts tell me that it will probably be a Tranformers ride considering the other two parks are in the process of getting one. What i would like to see which is probably highly unlikely is the WaterWorld Water action stunt show. Now that would be cool.

Well, I for one, won’t miss Jimmy. Experienced the attraction only once, and it gave me bad motion sickness!

Maybe it’s for the house of anubis ride?

My guess it will be a ride for Despicable Me. But Transformers looks right

I think it should be “The Incredible Hulk 4-D Simulator”! That would be awesome and people will love it. It will be an amazing experience!

I think it should be “King Kong 360 3-D”! Maybe it should be just like the one in Hollywood,but without the “Studio Tour”. You just get on a bus, and then you’ll return to “Skull Island”! The windows will be open so it can be a better experience. But like I said, no “Studio Tour”.OK? OK.

Maybe A Despecible Me Ride.