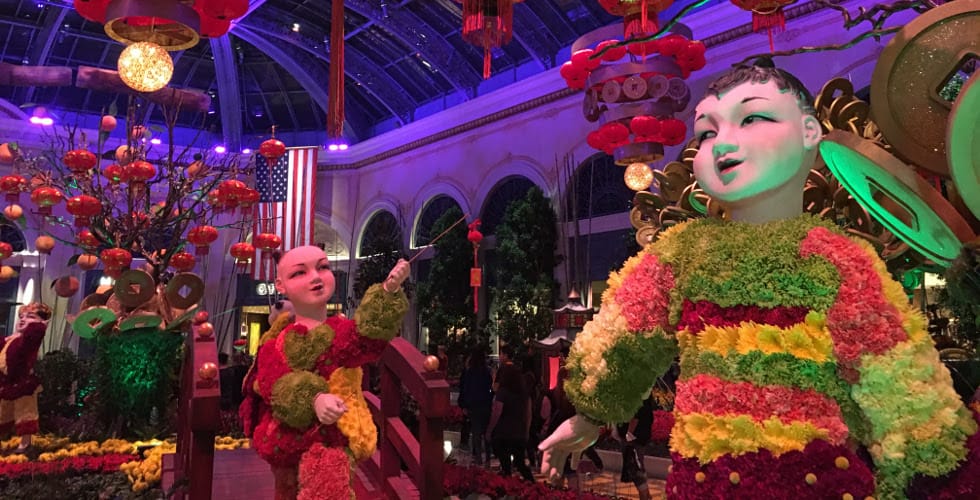 Las Vegas’s casinos are dressing up for the Year of the Dog to celebrate Lunar New Year in February.

Las Vegas has become an increasingly popular destination with Chinese tourists, and in February Sin City will welcome the Year of the Dog with some of the biggest Lunar New Year celebrations the Strip has ever seen.

According to the Las Vegas Convention and Visitors Authority (LVCVA), visitation from China has steadily increased over the past several years including a nearly 13 percent jump in 2016. China recorded the most visitors in history with more than 233,000 guests traveling to Las Vegas. December 2, 2017 marked the one-year anniversary of Hainan Airlines’ inaugural nonstop flight from Beijing Capital to McCarran International Airport in Las Vegas, which connects mainland China to Las Vegas. Accordingly, many of the major Las Vegas casino hotels are hosting Lunar New Year events, with special decoration, menus, and entertainment in honor of the Year of the Dog. 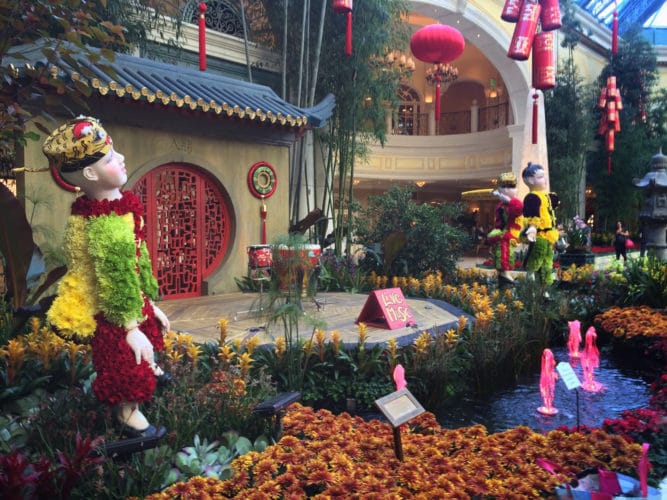 Upon arrival, guests of Wynn Las Vegas will be greeted by three, nine-foot-high golden dog sculptures to honor the Year of the Dog. More than 7,000 begonias, mums and calandiva flowers adorn the Wynn and Encore atriums.

The annual celebratory dragon display returns for another year at The Forum Shops inside Caesars Palace. The 22-foot-long dragon is dressed in thousands of LED lights.

Following a ceremonial ribbon cutting, the world’s tallest observation wheel, The High Roller at The LINQ, will be illuminated in red and gold to mark the beginning of Chinese New Year, Friday, Feb. 16. Nightly dance performances and prize drawings will be held on the promenade’s fountain stage. A full schedule of events can be found here.

Bellagio Conservatory & Botanical Gardens will display colorful lanterns, thousands of I-Ching coins and flowing fountains in a floral display through the beginning of March.

The Venetian and The Palazzo’s horticulture team consulted a fengshui master to create Vincenzo Li, a 16-foot Chinese Shar-Pei installation that symbolizes good fortune and protection.

The main lobby of ARIA Resort and Casino will be adorned in celebratory décor starting Friday, Feb. 9. A 196-foot dragon will hang from the lobby’s ceiling, weaving its way through a money tree made up of golden coins, representing wealth and luck. 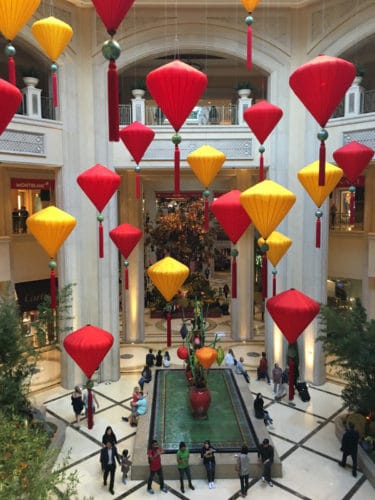 Fashion Show will host the 7th Annual CNY in the Desert Opening Ceremony with a special ribbon cutting and dinner on Friday, Feb. 16. The event will featured cultural performances by the Tianjin Dance and Acrobatic Theater Company, and a live authentic dragon dance and eye painting ceremony by Las Vegas Lohan School of Shaolin, followed by a ceremonial blessing. Following the ceremony, guests also have the option to purchase a Lunar New Year family-style dinner catered by Kona Grill and cocktails sponsored by Remy Martin.

The waterfall inside the Grand Canal Shoppes inside The Venetian and The Palazzo will set the stage for a traditional Chinese fan dance, as performers distribute more than 250 red envelopes filled with special gifts to guests on Friday, Feb. 16. From gift cards to chocolate gold coins, each envelope contains special offers available at participating Grand Canal Shoppes stores and restaurants.

A =parade will be held in the streets of Downtown Summerlin to honor the Lunar New Year, Feb. 16 at 6 p.m. An oversized decorative Chinese dragon will parade through the crowds with percussionists and traditional fan dancers.

For the first time, China Lights cultural festival makes its way to Las Vegas, painting the sky in hundreds of illuminated lanterns at Craig Ranch Regional Park until Feb. 25. The month-long exhibit features nightly stage performances, Asian and American food offerings and more than 40 artistic displays made by Chinese artisans. 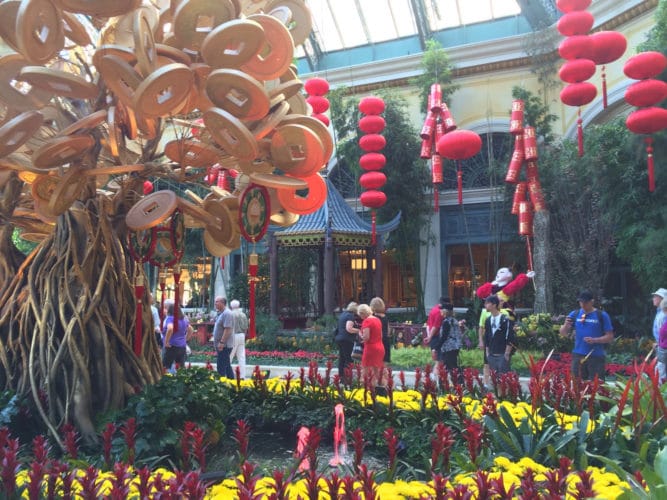 China Poblano by José Andrés at The Cosmopolitan of Las Vegas will offer a 15-day celebratory menu beginning Feb. 16. Specialty dishes include “The Chicken or the Egg,” “The Dragon’s Pearl” and a variety of significant Chinese fares. The restaurant will also offer a six-course tasting menu.

Hakkasan Las Vegas Restaurant will celebrate the Year of the Dog with a family-style dinner menu. Upon arrival, guests will receive a wishing ribbon before experiencing authentic Chinese cuisine such as crispy scallops in sweet plum sauce and Rhug estate lamb in seaweed soy.

Mandarin Bar at Mandarin Oriental will be one of the exclusive properties to feature the ‘Year of the Dog’ Edition of Johnny Walker Blue Label whiskey during the holiday. Guests can order the specialty “Wu Xing” cocktail concocted of imperial Oolong tea, sandalwood oils, flamed orange twist, a mandarin ice sphere and custom metal stirrer.

Hong Kong Café at The Palazzo will observe the Lunar New Year with a specialty-curated menu featuring a variety of crafted cocktails, including the Pink Lotus and the Blood Moon Daisy, paired with snacks such as peppered beef skewers, crabmeat wontons, and spiced cucumber.

To learn more about how to celebrate the Year of the Dog in Las Vegas, visit www.VisitLasVegas.com, and watch these videos for more year-round attractions in Sin City:

Can you send me a picture/image of the advertisement for the Year of the Dog? It’s in all of the hotels but I can’t find the image anywhere. It’s on the changing billboards and sound not take a good picture of it. Please respond with an image. Thanks Jeannie