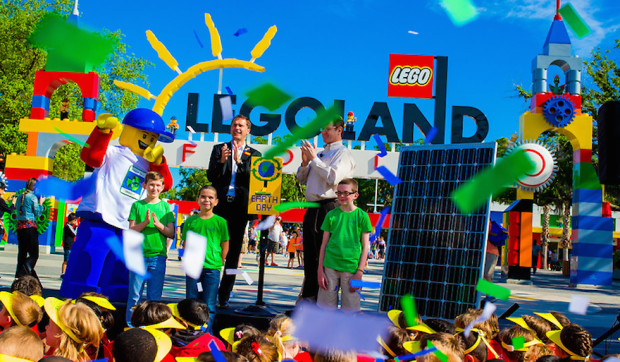 It takes a lot of power to run a theme park, so you wouldn’t expect it to all be run on renewable energy, but Legoland Florida pulled it off for one day, Earth Day.

Legoland Florida and Tampa Electric kicked off a groundbreaking partnership by making the 150-acre theme park run completely on renewable energy – the first theme park to do so in the United States. The celebration is part of existing and new conservation initiatives, including installations that will educate park guests about solar energy. As part of the partnership, Legoland Florida will also permanently power a section of the park, Imagination Zone, on renewable energy.

“This is a historic day for Legoland Florida,” said General Manager Adrian Jones. “With our new partnership with Tampa Electric, we will give guests a whole new way to learn about renewable energy while also doing something that no other theme park in the U.S. has done before.”

A celebratory moment will be held just prior to park opening Tuesday, at approximately 9:45 a.m., with both Jones and Bruce Narzissenfeld, vice president of Fuel Operations for Tampa Electric, proclaiming the partnership and special green initiative. The focal point centered around Legoland Florida running on renewable energy for an entire day, with environmental savings equal to removing three cars from the road for one year or planting six acres of trees. 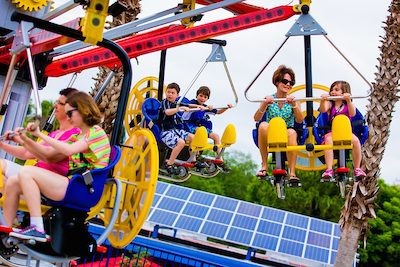 The partnership also resulted in the installation of a 30-kilowatt solar panel array mounted atop the Imagination Zone building. Funded by Tampa Electric, the system supports Tampa Electric’s Renewable Energy program that lets the company’s customers purchase a portion of their electricity from renewable sources.

“This is a partnership built on doing the right thing for the environment,” said Narzissenfeld. “Together, we’ll teach the next generation about the benefits of investing in renewable fuels like the sun to produce electricity.

As part of the partnership, a new display will be placed inside the park starting in June, featuring an interactive six-foot Lego Earth model that educates guests on solar technologies. Located outside Imagination Zone, visitors will be able to affect the rate of Lego Earth’s rotation with tactile solar panels. Guests will also enjoy an interactive zone that features Lego mini model communities running on renewable energy inside the Imagination Zone.

Legoland Florida has made a consistent effort for conservation since the park opened in 2011, including:
• The park recycled nearly 60 tons of bottles and cans in 2013, along with 176 tons of cardboard
• Throughout the park, guests can find over 180 recycled-made benches, with each made out of 800 recycled milk jugs
• Each of the park’s 310 trash cans (consisting of both waste and recycle only at a 1-to-1 rate) are made out of 330 recycled milk jugs
• Legoland Florida has map recycling stations to avoid the waste of park maps that guests can acquire at the beginning sections of the park
• The Legoland Water Park holds 26 benches and 88 trash cans made entirely out of recyclable materials

Out of the Loop: For a unique thrill, try the world’s only underground zip lines at Mega Cavern

Christmas Town to be included with daily...