Lin-Manuel Miranda is currently costarring as Jack in “Mary Poppins Returns”, the holiday family musical from Walt Disney Pictures. But the Tony-winning composer’s latest role is far from Miranda’s first encounter with the Mouse. During a recent press event in Miami on the day of Mary Poppins Returns‘s release, our reporter participated in a roundtable discussion where Lin-Manuel Miranda shared his thoughts about a number of other Disney-related movies, including “Moana”, “The Little Mermaid”, and “Guardians of the Galaxy”. 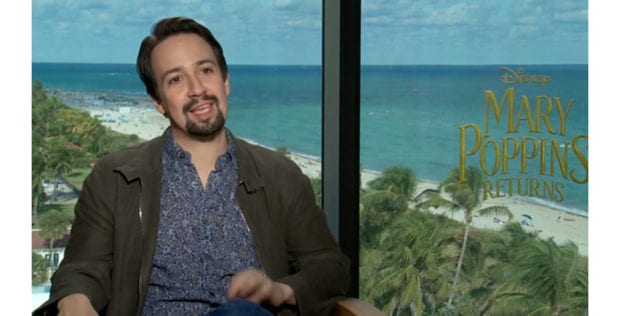 The easiest song I ever wrote was “You’re Welcome” for Dwayne “The Rock” Johnson, because I was a fan of when he would sing as a wrestler. I knew his vocal range, and I knew that if I made the hook “you’re welcome,” he’s the only person who could pull that off and actually have it be charming. Because he’s Dwayne “The Rock” Freaking Johnson!

On growing up watching ‘Mary Poppins’:

Two-thirds of “Mary Poppins” was my favorite movie. I owned that movie on VHS growing up. I don’t remember when it landed in our house, but I remember spending many hours dancing with Dick Van Dyke and those penguins during “Jolly Holiday”. And then I would turn it off just as soon as “Feed the Birds” came on, because that’s the saddest melody in the history of the world, and it just broke my little heart. I would turn it off, because I could, because it was on VHS. I didn’t see the end of the movie or “Step In Time” until I was in high school.

On the Guardians of the Galaxy films: 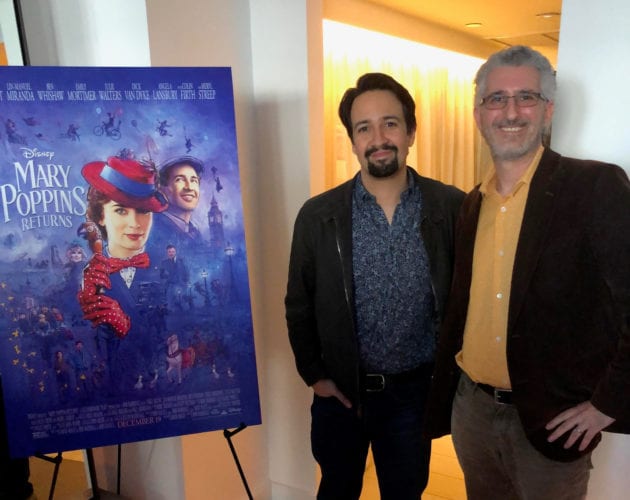 I’ll tell you what I love about [Guardians of the Galaxy] is the notion of the mix tape. I feel very lucky that I came of age at a time when cassette was the dominant form of listening to music, and here’s why: I grew up in mix-tape culture, and I believe that everything I learned about writing scores, I learned when I was making mix cassettes for people I loved and for friends. Because they have to listen to it in the order I set, I am telling how I feel about them by the choices of songs, and there’s a rise and a fall. There’s a side A and side B, just like we have an act break in musical theater. Everything I know about writing Broadway scores I learned making mixes for girls I liked.

On ‘The Little Mermaid’:

The moment Sebastian started singing to Ariel, that was the giant supernova in my childhood imagination. I saw it on a playdate with a friend, and I dragged my parents back the next week, and then I dragged my sister to take me again. And then I called in sick from school the day it came out on VHS so that I wouldn’t have to wait until the end of the school day. I was obsessed with how fresh and how inventive those numbers felt. They felt as if they were written today, and yet they felt like instant Disney classics.

On the current movie musical renaissance:

I think it’s not a coincidence that we are seeing the rise of the movie musical again in a very real way. I grew in a fallow time for movie musicals. We had “Fame”, we had “Newsies”, we had “Labyrinth”. The ’80s were rough for movie musicals; I love all those movies that I listed, but there just weren’t that many. I don’t think it’s an accident that the peak of the MGM Hollywood musical coincided with a really dark time in our world’s history: the 1930s and 1940s. I think we’re increasingly going the movies to escape, and to have a collective experience of joy together.

Read: The ‘Rather Sophistical’ music of ‘Mary Poppins Returns’

American Idol winner will be 'Going to...