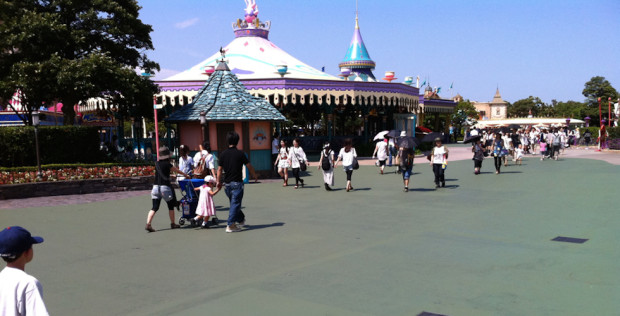 Tokyo, Japan – While few American Disney fans have ever ventured around the world to the Asian Disney parks, reports from those who have always seem to be not just positive, but actually gushing. Just a few days ago, The Oriental Land Co., the company that owns the Tokyo Disney parks, announced $4 billion more reasons for Disney fans to make their way to the East.

$500 billion yen, or about $4.45 billion U.S. will be invested in the parks over the next 10 years. To put that staggering figure into perspective, the entirety of the Disney California Adventure initial construction was $600 million and the 2007-12 redesign and expansion was $1.1 billion. Selfishly, an American might be tempted to wonder why Disney is investing so much in the these Asian parks and fear that it may take away from the U.S. parks. Well, fear not. While these parks were built by Disney Imagineering and the Disney theme licensed from Disney, the parks are owned and operated by the Oriental Land Company. These two Tokyo Disney parks are the only two in the world not even partially owned by Disney.

So what will be expanded?
Well, like its cousin in Florida, Fantasyland will get a major makeover. Like in Florida and California, Fantasyland resides within the Magic Kingdom-style park, Tokyo Disneyland. The existing Fantasyland will be renovated. Additionally, an expansion will essentially double the land’s current size. Major new attractions, restaurants and shops are being considered for the area. No word on what these new attractions will be however.

Unlike Tokyo Disneyland that mirrors Magic Kingdom parks around the world, Tokyo DisneySea has no counterpart. A similar park may have been built in California, but reportedly, financial trouble related to Disneyland Paris put the brakes on the project. The idea made it to Japan and boy did they run with it. Opened in 2001, with a price tag of $4 billion, it was the mostly expensive Disney Park to build. The theme is one of sea exploration. Rather than themed lands, Tokyo DisneySea has themed ports of call. The entrance is the Mediterranean Harbor while others include American Waterfront, Lost River Delta, Port Discovery, Mermaid Lagoon, Arabian Coast and Mysterious Island. An eigth as yet unnamed port of call has been planned for DisneySea. It too will include new attractions, restaurants and shops.

The announcement also mentioned renovation of backstage areas, new entertainment, and development of “measures to protect guest from hot and cold weather”. They also enigmatically stated there would be “development of hardware that will enhance guest experience in the parks”. What such hardware would be is any aspiring Imaginner’s guess. Perhaps as important as park expansions and attractions is the statement that they will “continue to raise the level of hospitality provided by cast members”.

There has been speculation from several sources that a Frozen attraction will be the centerpiece and could open as soon as 2017. While it certainly fits in Fantasyland with all the princesses, one could imagine an entire rebuilding of Arendelle within a DisneySea port since that fictional town is indeed a seaport. There certainly would be interest in a Frozen attraction in Japan since it is the third highest grossing film of all time in Japan between Titanic and Harry Potter and the Philosopher’s (Sorcerer’s) Stone. Tokyo Disneyland will get a taste of Frozen this winter when it presents Ana and Elsa’s Frozen Fantasy from January to March 2015. This event will be similar to the summer event that took place at Disneys Hollywood Studios.

DVD Review: ‘Maleficent’ worth owning, but extras are lacking

VIDEO: Pirates of the Caribbean reopens at...